Munich is a city that is sometimes known for being chic and snobby. Although this isn’t entirely wrong, reducing Munich to those characteristics alone would be extremely wrong because Munich is also a green, lively, liveable city. When the weather is good, the whole city goes outside and enjoys life. When the weather is bad, everyone swarms into the city’s cafes and they enjoy life there instead.  In the next 24 hours, I will show you a young, hip Munich. To do that, we will be walking from the university campus in the Maxvorstadt/Schwabing area to the Glockenbach district.

Our day gets off to a relaxing start at Café EMIL. We sit in old chairs like the ones your grandma used to have, right in the large shop-front window, which gives us an excellent view of Munich as it slowly wakes up. While we watch this unfold, tiered plates full of breakfast fortify us for the day ahead. On top of that, we treat ourselves to fresh waffles with maple syrup. Cafe EMIL is both stylish and cosy at the same time. 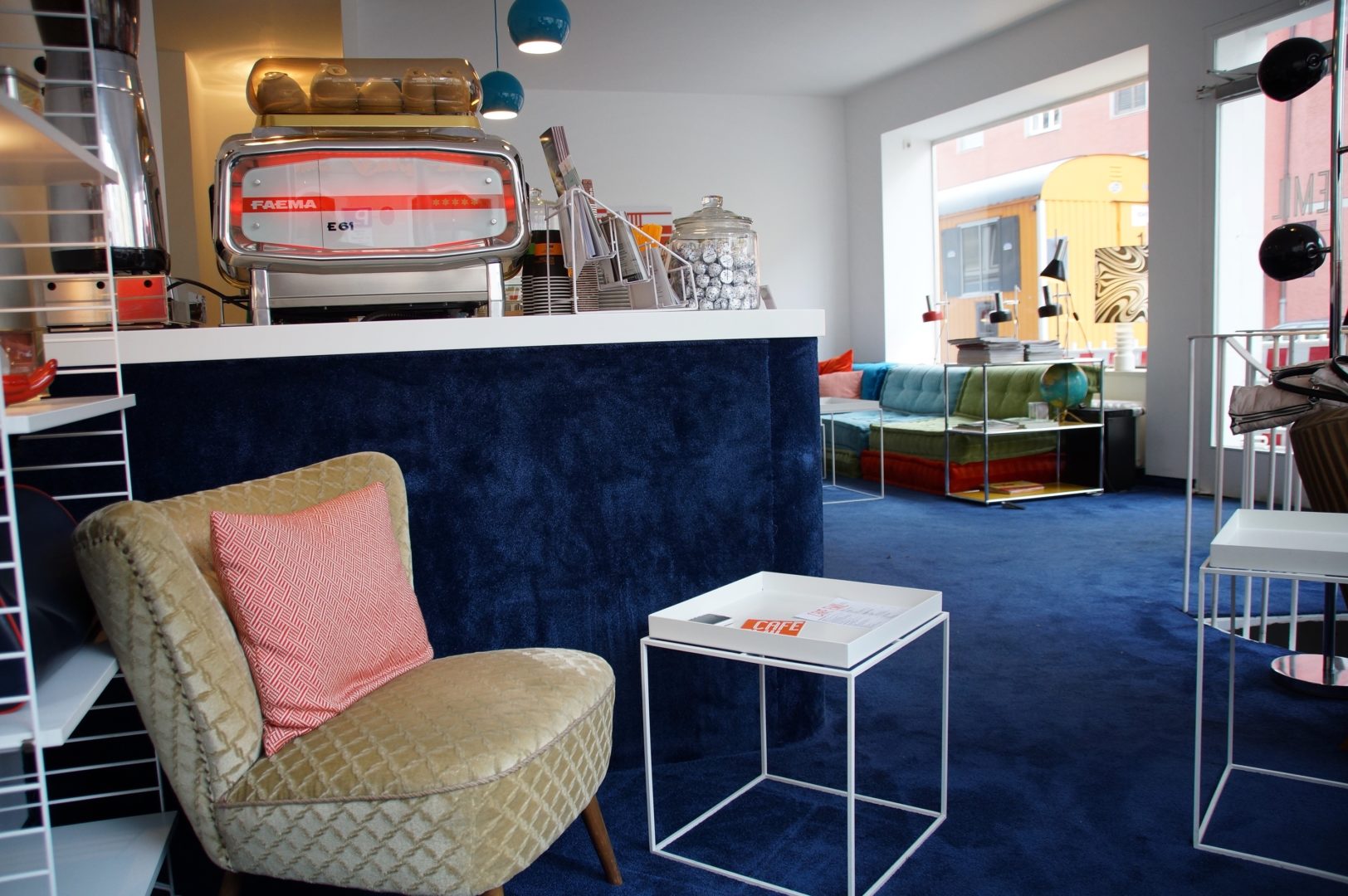 For fans of Bavarian cuisine: If you like to keep things traditional, you should start your day with a traditional breakfast of Weisswurst (Bavarian white sausage) from the Augustiner Bräustuben. It is served with sweet mustard, a pretzel and a wheat beer. Cheers!

Shopping in the Maxvorstadt/Schwabing district

From Cafe EMIL, we hop on the 154 bus for two stops, arriving further up the street in the highly sought-after university district. The streets here run at right angles like a chess board, so you’re unlikely to lose your way. It’s the perfect time to have a bit of a wander round. The parallel streets (Barerstrasse, Türkenstrasse and Amalienstrasse) and the street that crosses them (Schellingstrasse) are packed full of boutiques and cafes that are crying out for you to discover them. Who knows, perhaps among them you will stumble across Michael Weiß’s antique shop? (Read more here: here) 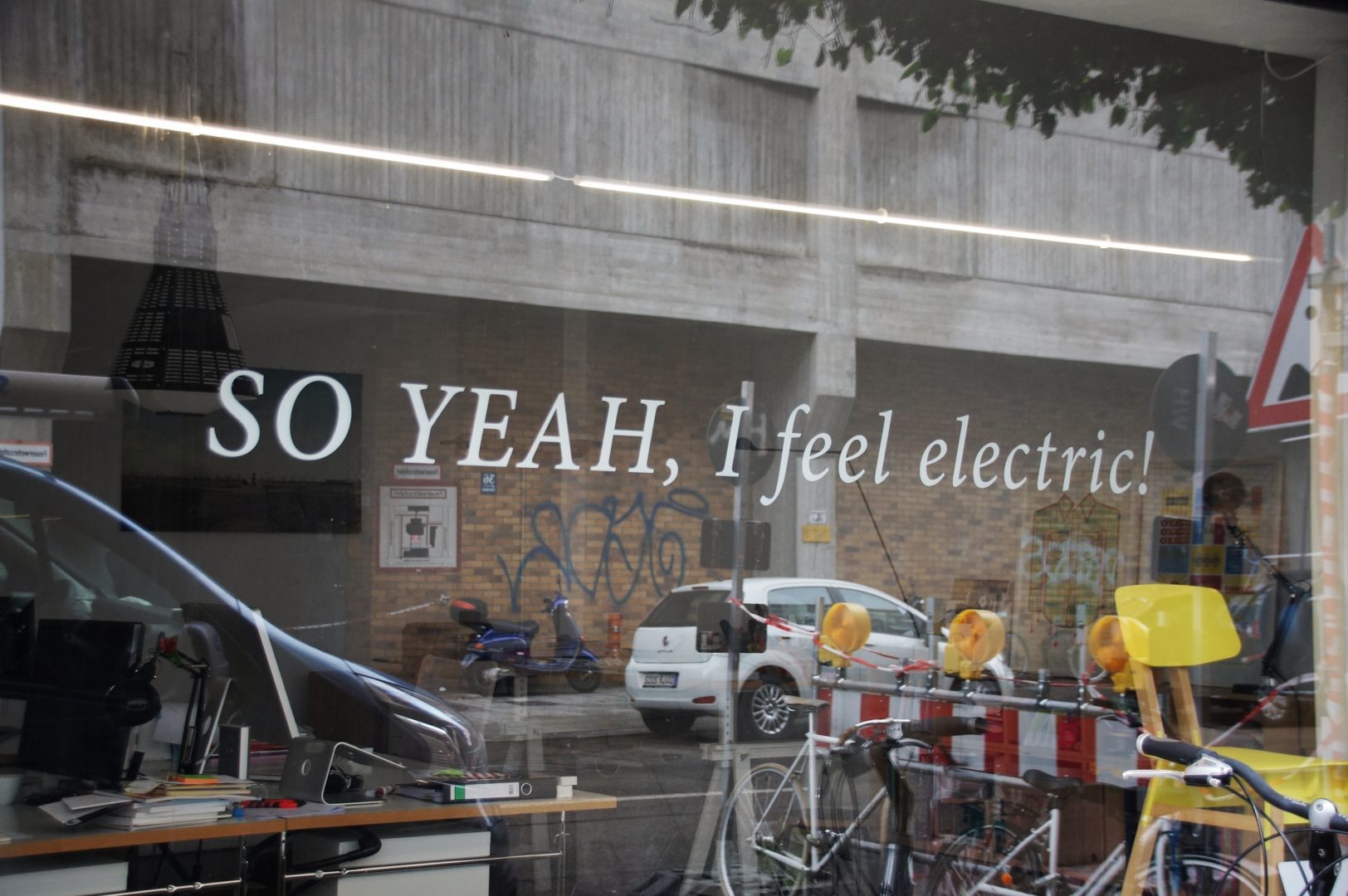 When I first looked around at the University of Munich, before studying there, I was full of awe and reverence. I thought to myself, “Surely you can’t help but become intelligent in this place!” The main building of the Ludwig Maximilian University really is pretty impressive, both inside and out. It is also steeped in history, being the place where the White Rose resistance movement was born during the Nazi era. In honour of this, stone versions of the leaflets have been integrated into the pavement in front of the university.

No visit to Munich is complete without having been to the Englischer Garten (English Garden), or E-Garten for short. It is one of the largest inner-city parks in the world with an area of nearly four square kilometres, which explains why Munich is so green and such as good place to live. Approaching from the university, we pause at ‘I love Leo’, which has become something of an institution in Munich — a real life-saver on hot summer days. If the weather is warm, we will pick up a frozen yoghurt (with blueberries, cracknel sprinkles and fig sauce) for the road. In winter we would choose hot rice pudding with cherries, cinnamon and sugar.We keep walking towards the Haus der Kunst (House of Art), which is where we can watch the surfers on the world-famous standing wave on the Eisbach, a man-made river. Surfers flock here all year round and in all kinds of weather.

If you have more time on a summer’s day: Check out the beer garden at the Chinese Tower! You might even see a horse-drawn carriage or two…

Our journey continues, taking us past Munich’s landmarks and stately buildings. We walk through the Hofgarten, across Odeonsplatz, past the opera and the opulent Maximilianstrasse and then across Marienplatz. We are now right in the centre of Munich. After being typical tourists and posing for a photo in front of Munich’s New Town Hall, we keep going towards the Viktualienmarkt food market for some refreshments. We are also crossing the symbolic equator of Munich, which separates the slightly more upmarket morning in Maxvorstadt/Schwabing and at the E-Garten from the afternoon in the Glockenbach district and on the Isar river, which will be more laid-back. 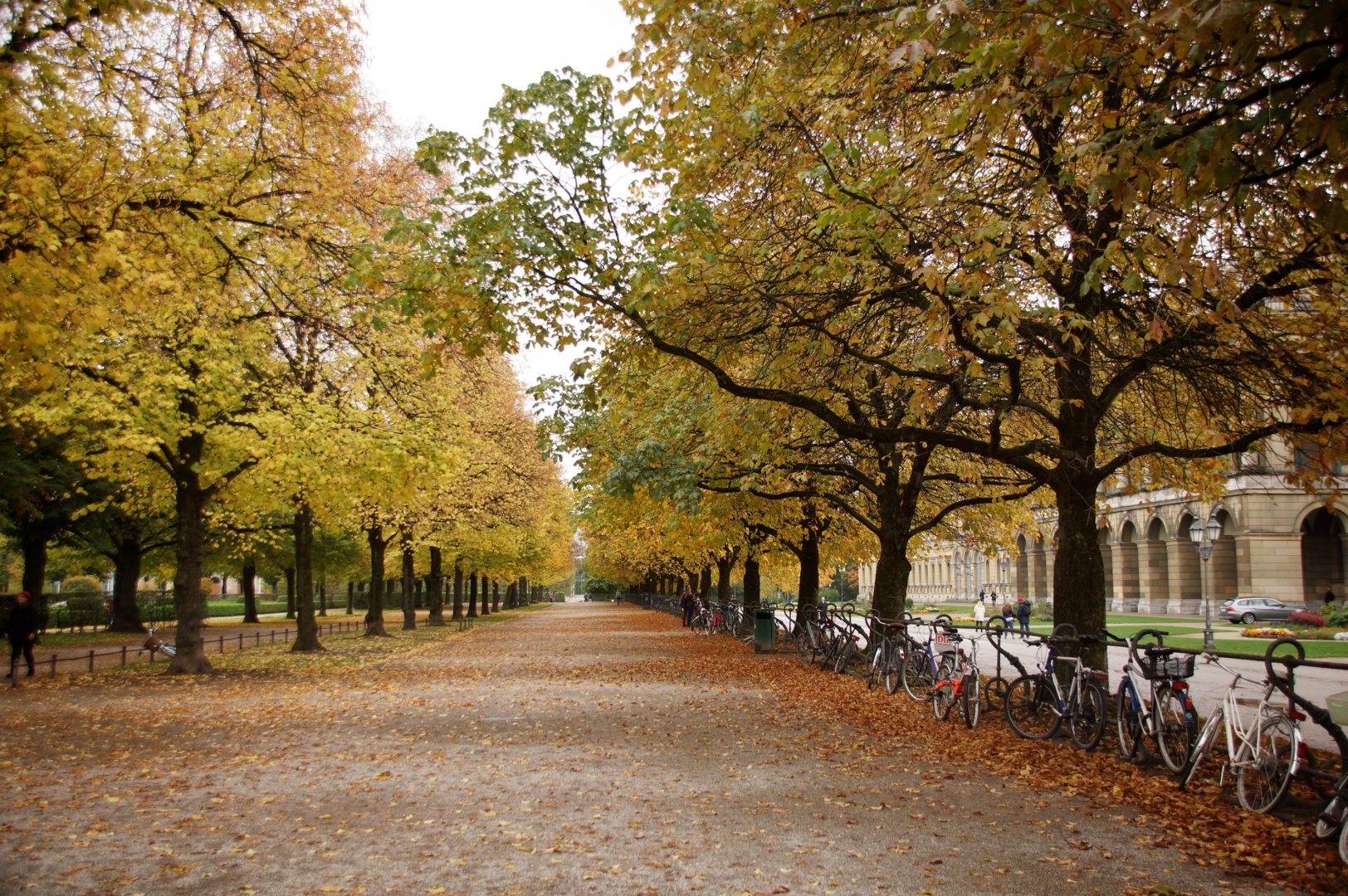 Time to pause for a while among the colourful delicacies. The Viktualienmarkt is a bit like a permanent farmers’ market, which has fixed little huts for the stalls. In true Bavarian tradition, I would recommend you take the opportunity to enjoy a bread roll with Leberkäs (meat loaf) and sweet mustard. But maybe it’s the houmous on the stand next door that catches your eye? 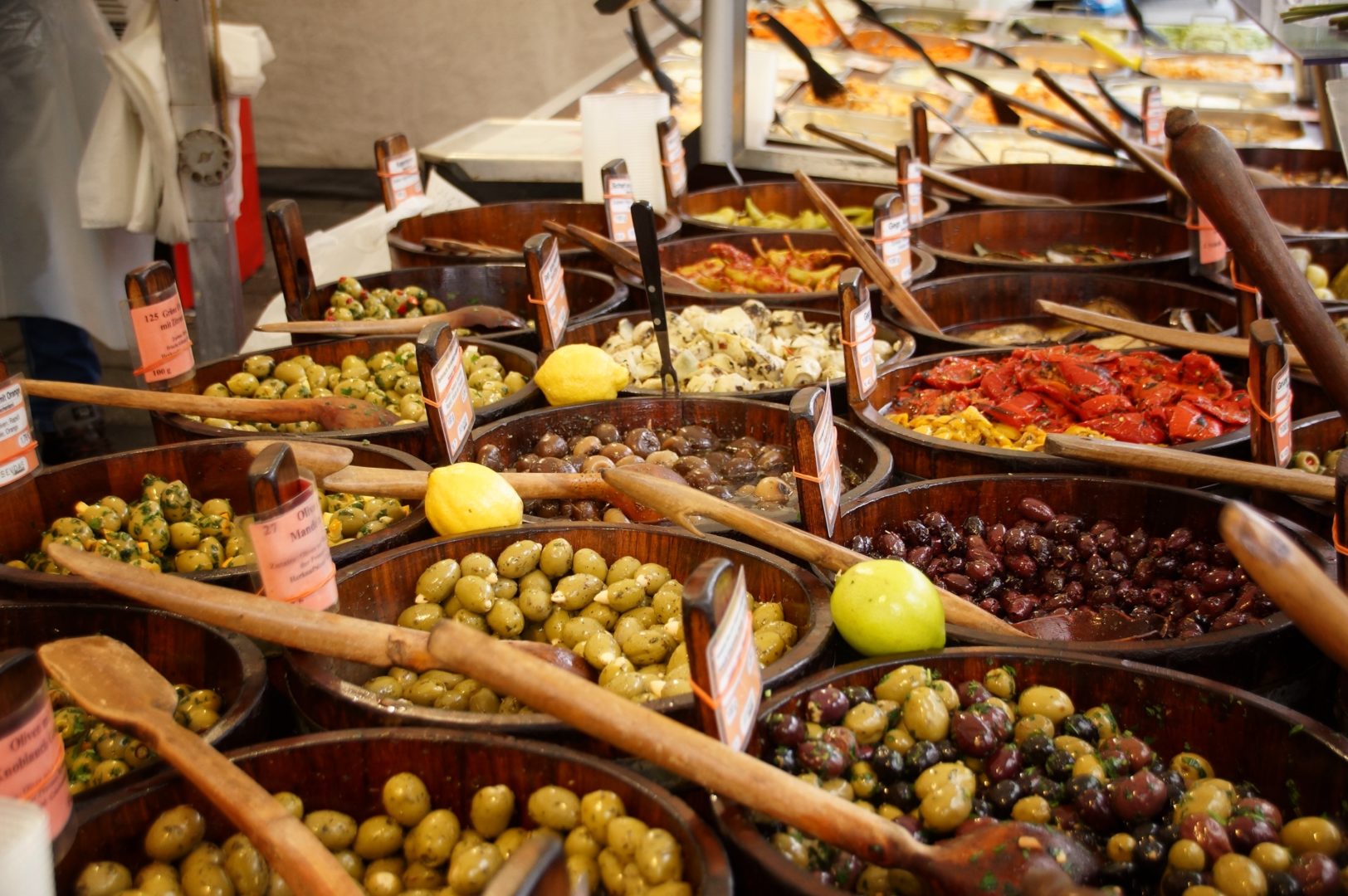 If you want something even more traditional: The world-famous Hofbräuhaus in Munich’s Tal area is just a stone’s throw away. But watch out because Munich’s famous Talstrasse is full of nooks and crannies!

Now we are in the hip Glockenbach district, which was once the centre of Munich’s LGBT scene. Everything is more relaxed here than where we were this morning. In summer, there is a good chance you’ll stumble across one of countless street festivals and with a bit of luck you might also encounter a courtyard flea market. (Read more here). 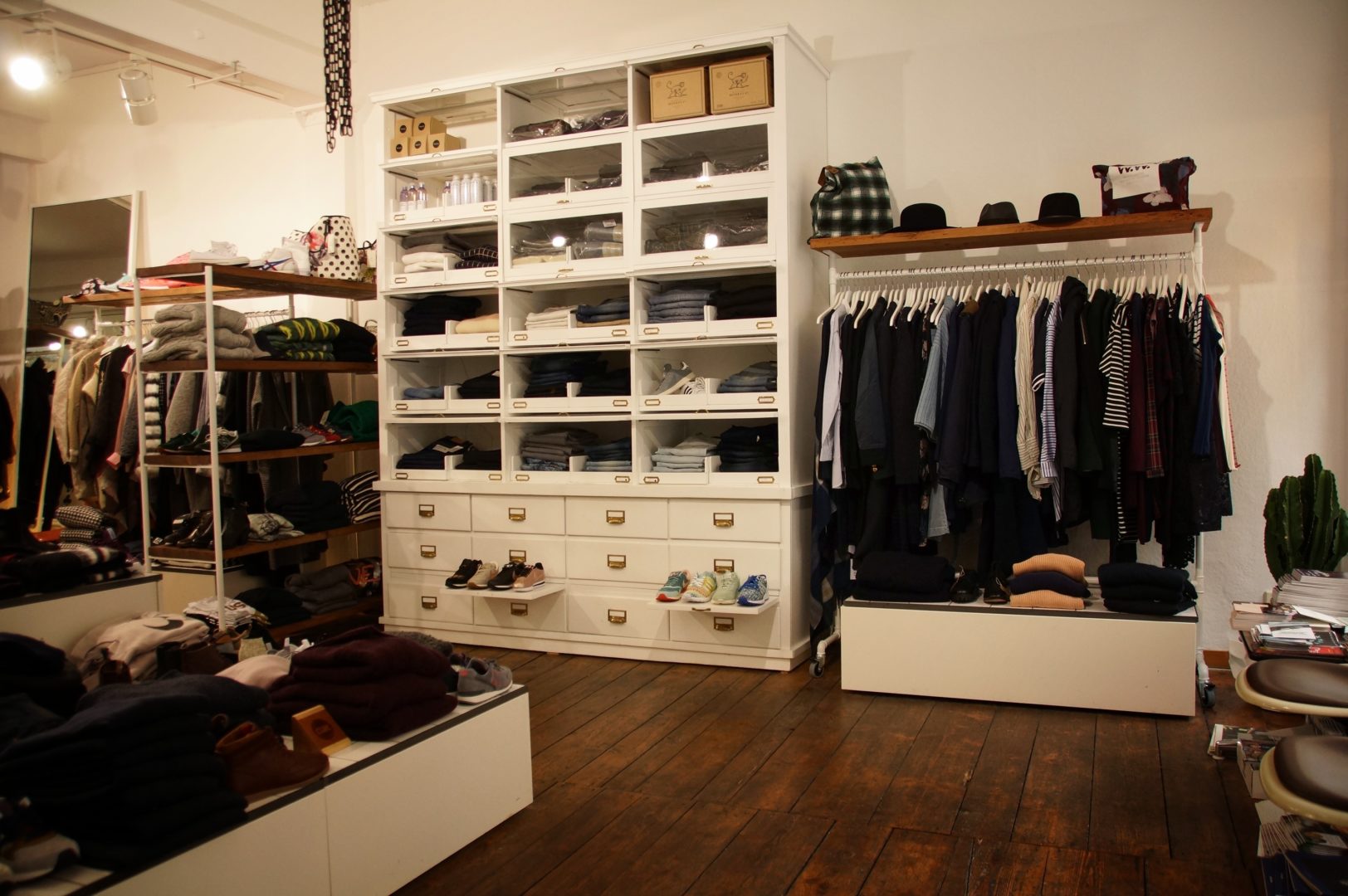 In the Glockenbach neighbourhood, everywhere you look you will see crazy but friendly people who have each turned their passion into a livelihood. One such person is Pierre Schmook from Sams&Son, a true hunter-gatherer. Here is a warning to any fans of travelling, antiques or films: you will never want to leave this place! You’ll find the real props for films such as The Grand Budapest Hotel… or maybe the contents of your new, shockingly expensive dream home! (Read more here)

We weave our way through the winding but friendly streets of Glockenback until we find Aroma Kaffeebar. Finally, a chance to sit down — on chairs like the ones we had at primary school! Or maybe on an old coffee chest. In any case, let’s sit by the window. It is safe to say that Aroma Kaffeebar does an excellent iced carrot cake. Not to mention the coffee! And if you are looking for a slightly mad gift or fun decorations for the next big party, you are sure to find something suitable in the little shop section. 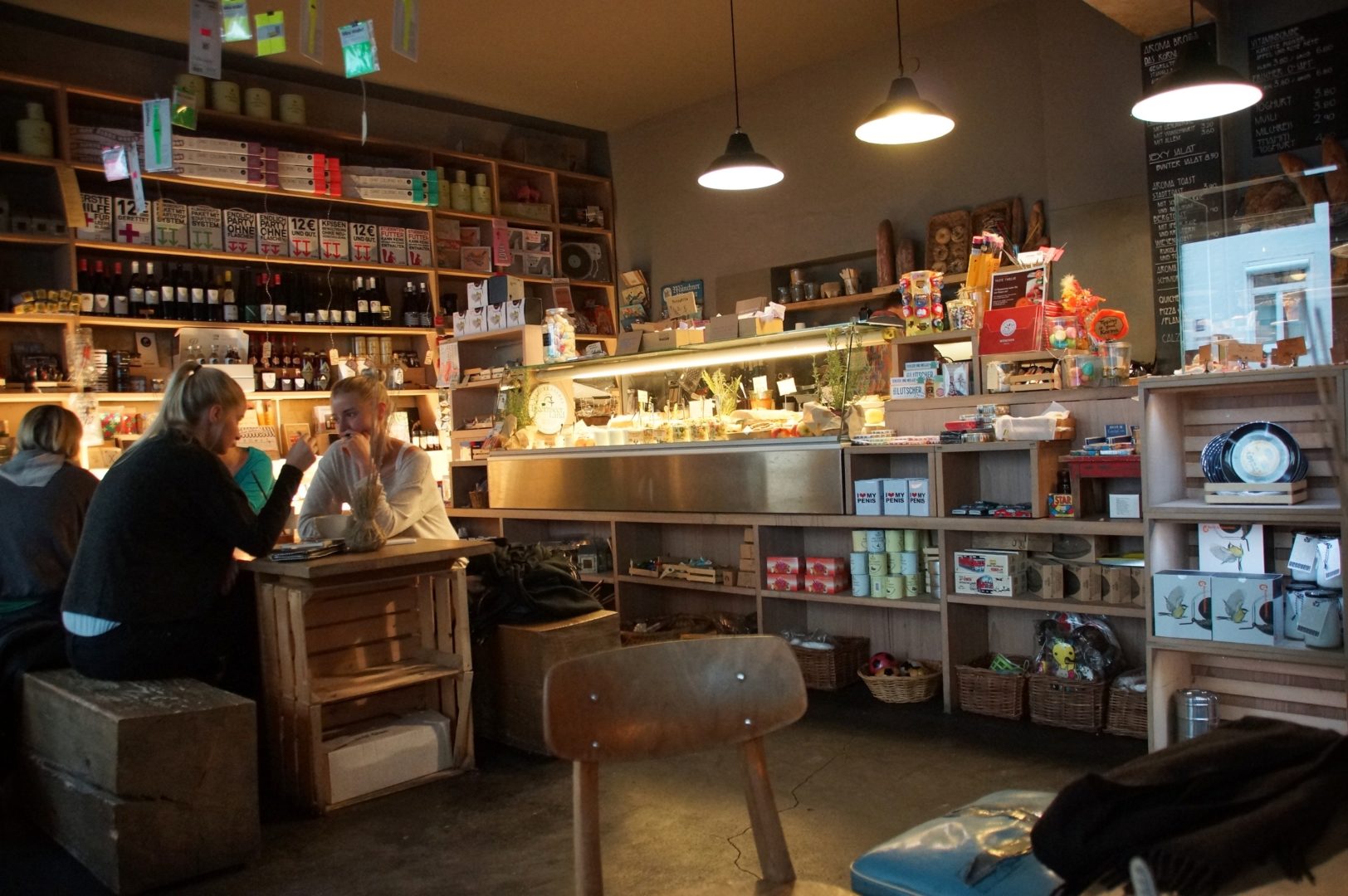 During summer: The ice cream parlour Eiscafé Eismeer directly opposite probably makes the coolest and best ice cream sundaes in Munich. One such sundae is the Steirisches Vanilleeis (Styrian style vanilla ice cream), garnished with pumpkin seed oil and caramelised nuts, all served in a home-made waffle bowl. So delicious! 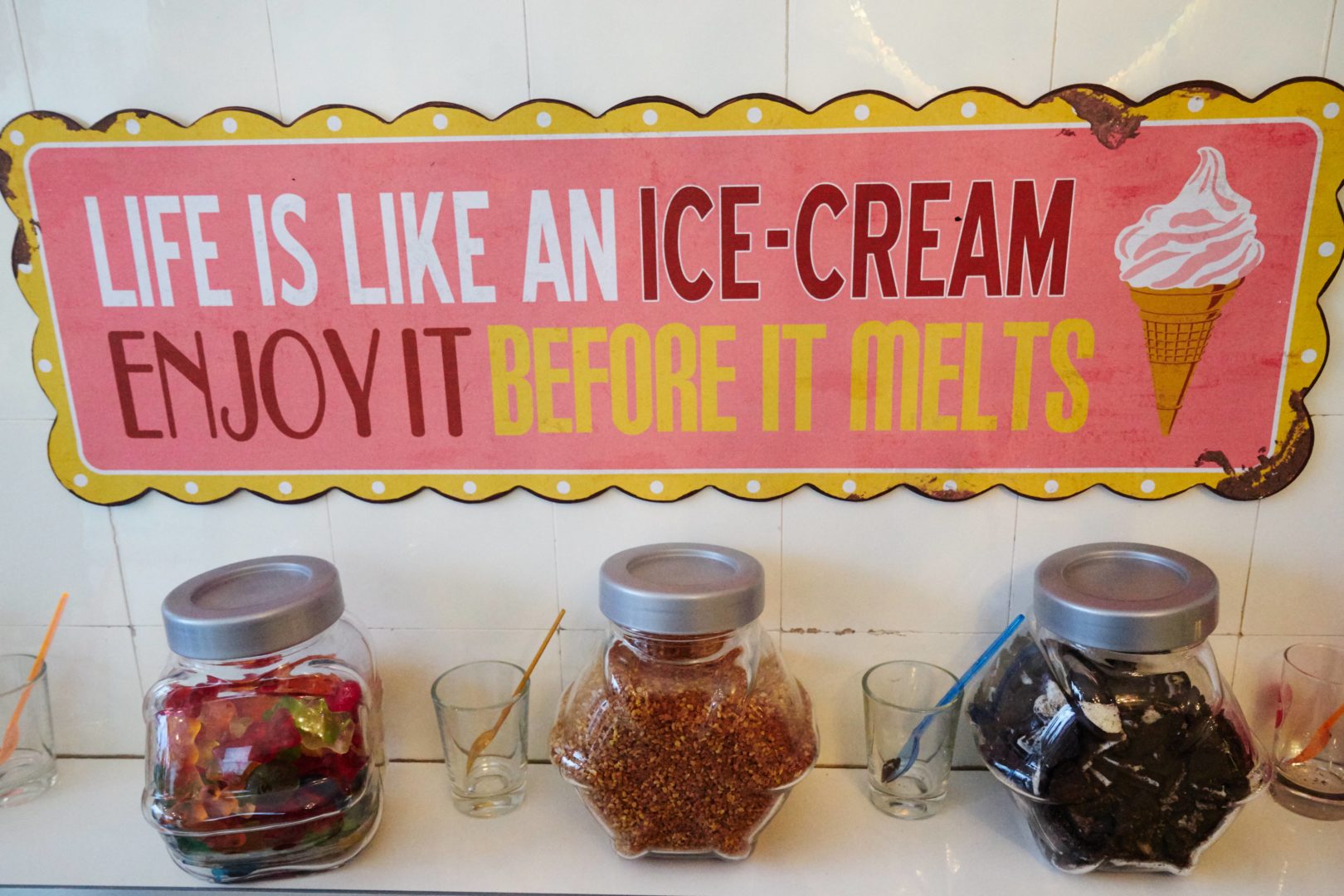 Views of the Isar river

We take an evening stroll and do some window shopping as we head towards the Reichenbachbrücke. This bridge is the definitive place to meet and hang out in Munich. This is due to another one of Munich’s institutions — the Reichenbach kiosk. It is probably the only shop in Munich that even vaguely resembles an open-all-hours corner shop or off-licence. In the summer we’ll get ourselves a beer and take a seat on the grass. In the winter we’ll just take in the colourful lights for a while and then move on.

For our evening meal we will follow recommendations and go to the München ’72 cafe and bar. As a nod to the summer Olympics held in Munich in 1972, we are seated on old vaulting horses and boxes — the kind we used to have to laboriously jump over in school gymnastics lessons. The Spätzle (soft egg noodles) come highly recommended. On Sundays, people gather here to watch the German crime investigation series Tatort when it is broadcast on TV.

Having a drink at Cooperativa’s bar is always a good experience because it is very friendly and relaxed (it’s in Glockenbach, too). Insider tip: The Dude. It’s a White Russian made with milk instead of cream. It is a tribute to The Dude in The Big Lebowski and it tastes like chocolate milk that is just a little bit too nice.

During summer: Time to grab a bottle of wine or beer from the kiosk at Reichenbach and take over Gärtnerplatz, which is the place to be on warm summer nights.

Munich’s nightlife offers a few different options. For something a bit classier, head to Downtown Flash. If you like electro and you’re 25 or over, get yourself to the Registratur bar and if you prefer dancing to hip-hop tunes, you’ll love Crux. If you’re after chart music, the place to go is Partybanane on Sonnenstrasse and if you’ve always wanted to go to a warehouse party, the MMA is for you. If you’re into sophisticated indie music, Muffatwerk has regular indie nights such as Starmelt, Panda Party and Halli Galli Drecksound.

After all the beer, dancing and/or walking around, it is highly likely that we will be hankering for a midnight snack. The place to go on nights like these is the well-known establishment called Bergwolf: chips and Bratwurst sausage to the rescue! But be warned — the queue is long at this time of night. It is just a short trip on the U2 underground train from here to the MEININGER Hotel.