“This is what happens when New Year’s Eve and a birthday, the first festival of the summer and the Oktoberfest in Munich are all combined in one single event!”

I have never seen anything like it! It is just 10 o’clock in the morning and the first party boats are already chugging by on the canal outside our house. Decked out entirely in orange, they are packed with people in a jovial mood. The speakers are on full blast, party hit after party hit blares out, and we also turn the music up in our house. 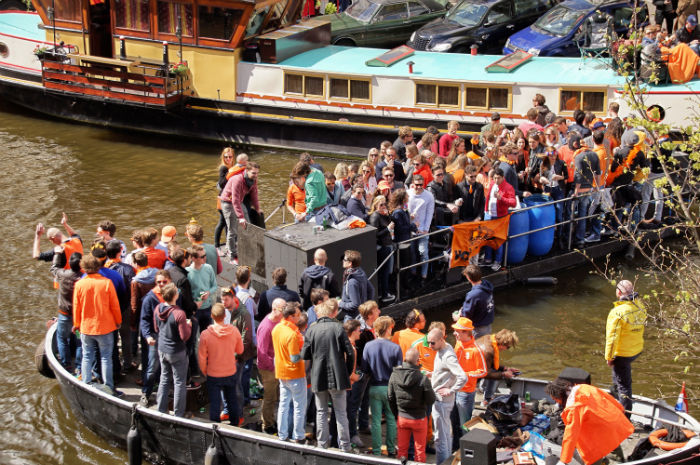 My girlfriend and I lean out of the window like to excited teenagers attending their first big party and take in the lively goings-on outside. “Anne, we aren’t going to fit in,” I remark with concern – looking over the orange Hawaiian wreaths slung around our necks, the orange heart-shaped sunglasses and orange crowns on our heads: “We aren’t wearing enough orange!”

We are in Amsterdam on King’s Day. The Dutch celebrate this day as if there were no tomorrow! King’s Day, or Koningsdag in Dutch, is the national holiday in the Netherlands that celebrates the country’s monarch, King Willem Alexander. It is in fact THE Dutch national holiday! Every year on 27 April (his birthday), the people take to the streets decked out in orange to celebrate. Up until 2013, when Beatrix was queen, Koninginnedag was celebrated on 30 April. But that is now history.

Anne cheerfully throws another orange wreath over my head and shouts for what must be the fifth time the only three Dutch words we know: “Hooooeee gaaaaat det?” [“How are you?”]. We return to the window to wave at the passers-by. The previous total of five boats we could count at a glance has meanwhile increased to 15; the streets begin to fill and we also finally want to get on out.

For we have a date with Ron and Finn from Canal Motorboats and their 30 friends with whom we want to celebrate aboard their old barge today. We fight our way through a mass of orange-clad revellers on our way to the boat. Little stalls selling trinkets and other wares line the streets, turning the entire city into one big flea market. Every other stall is selling Poffertjes – a Dutch speciality comprising little fluffy pancakes, and we have to stop every hundred metres to watch a street performance. 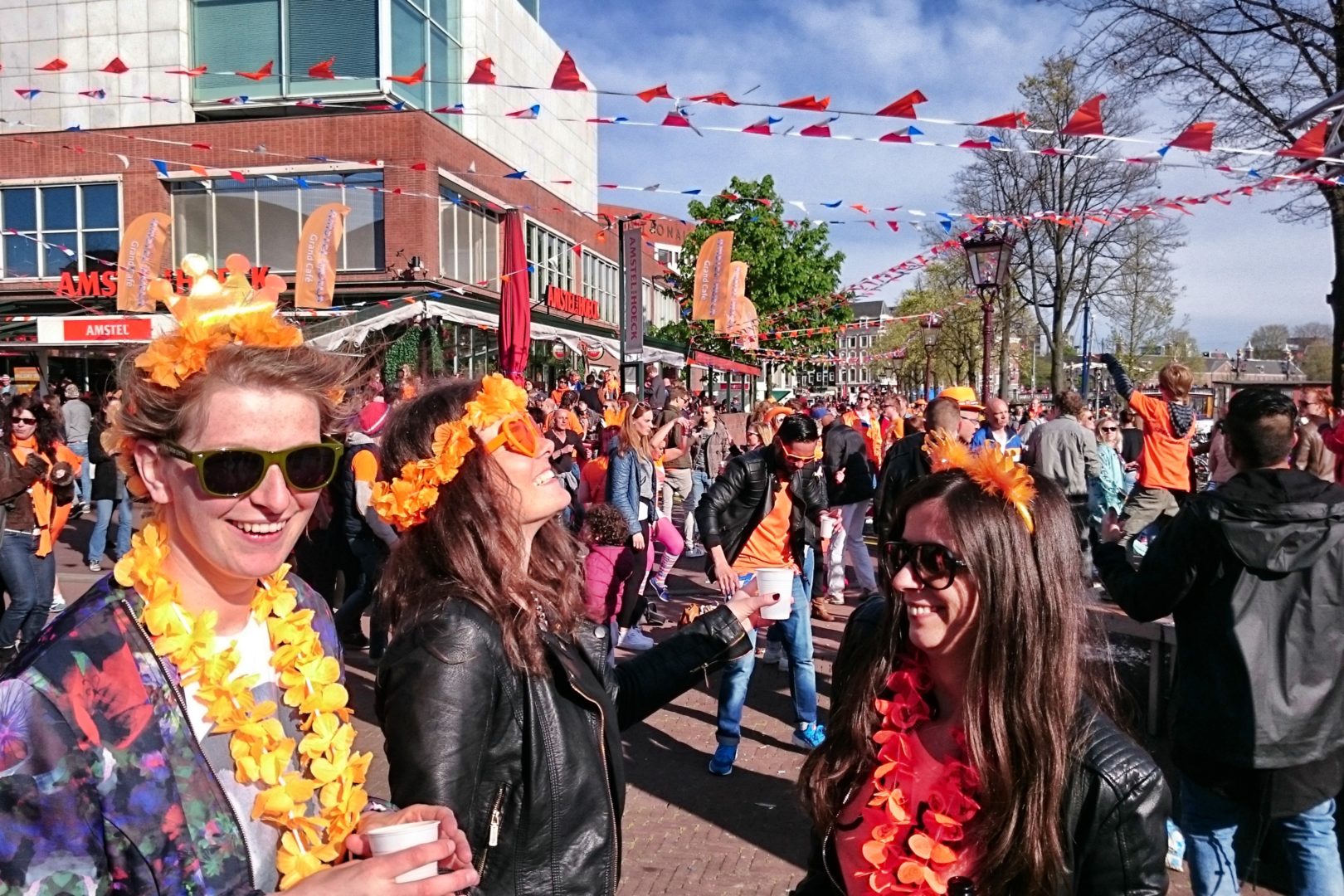 The madness then really begins when we board the boat. We set off with a crew of more than 30 aboard a barge that can normally comfortably accommodate just ten. Seats are rare – not that it matters: in my excitement, I far prefer to hang over the side. What else should I do with all my energy than to balance on the side of the barge?! After all, I can’t fall in the water, as the next boat is right beside us where there would otherwise be water. We soon all strike up a conversation, hop from boat to boat and back again, moving at a snail’s pace on a single wave. Friends of the captain jump onto the boat from bridges time and time again and greet us as if we had known each other for weeks. Our destination is the party at Waterlooplein. We moor up and dance, dance, dance … until the sun goes down. Anne and I look at one another knowingly: this is the only moment that counts. King’s Day, we will definitely be back! 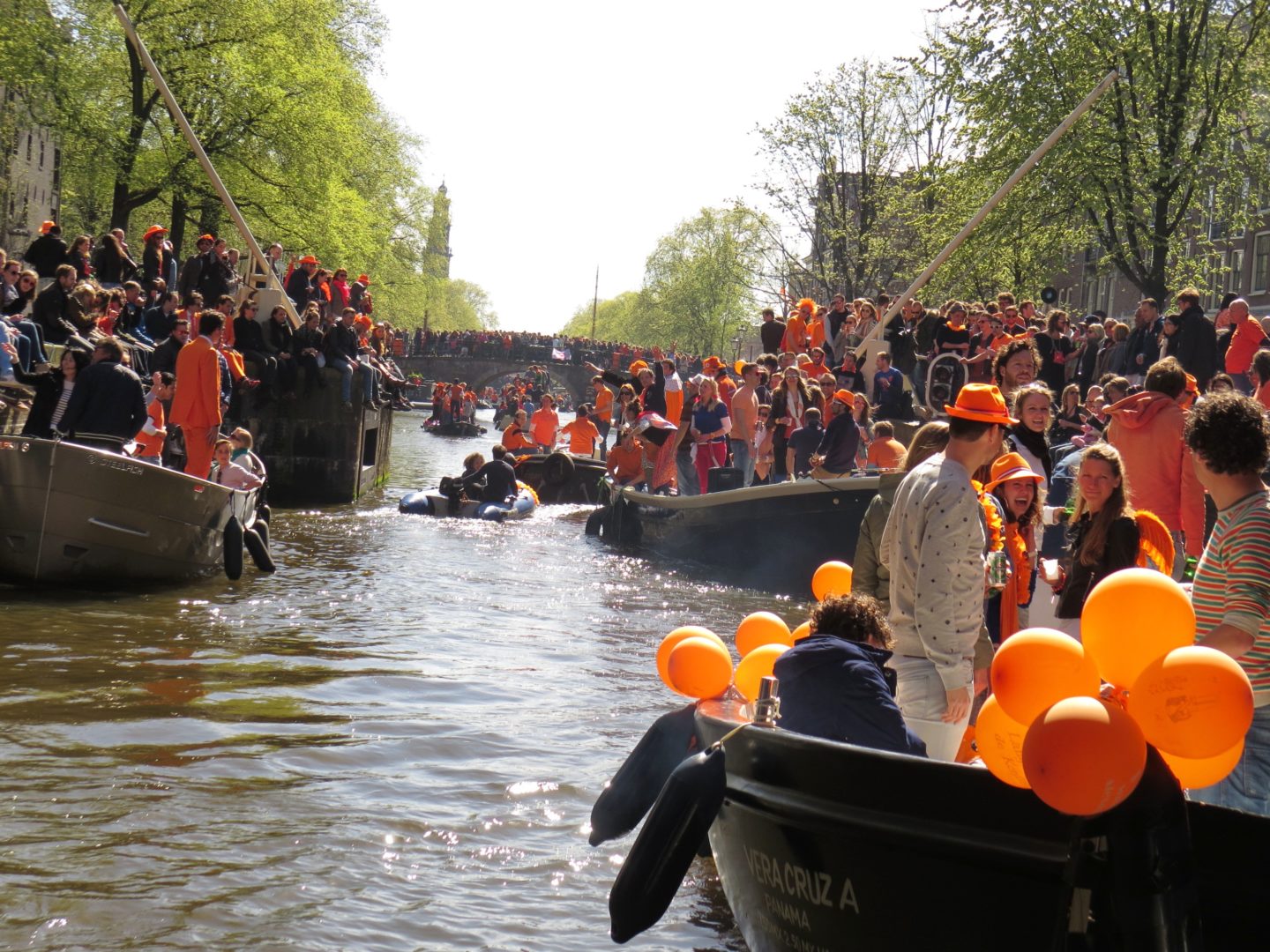 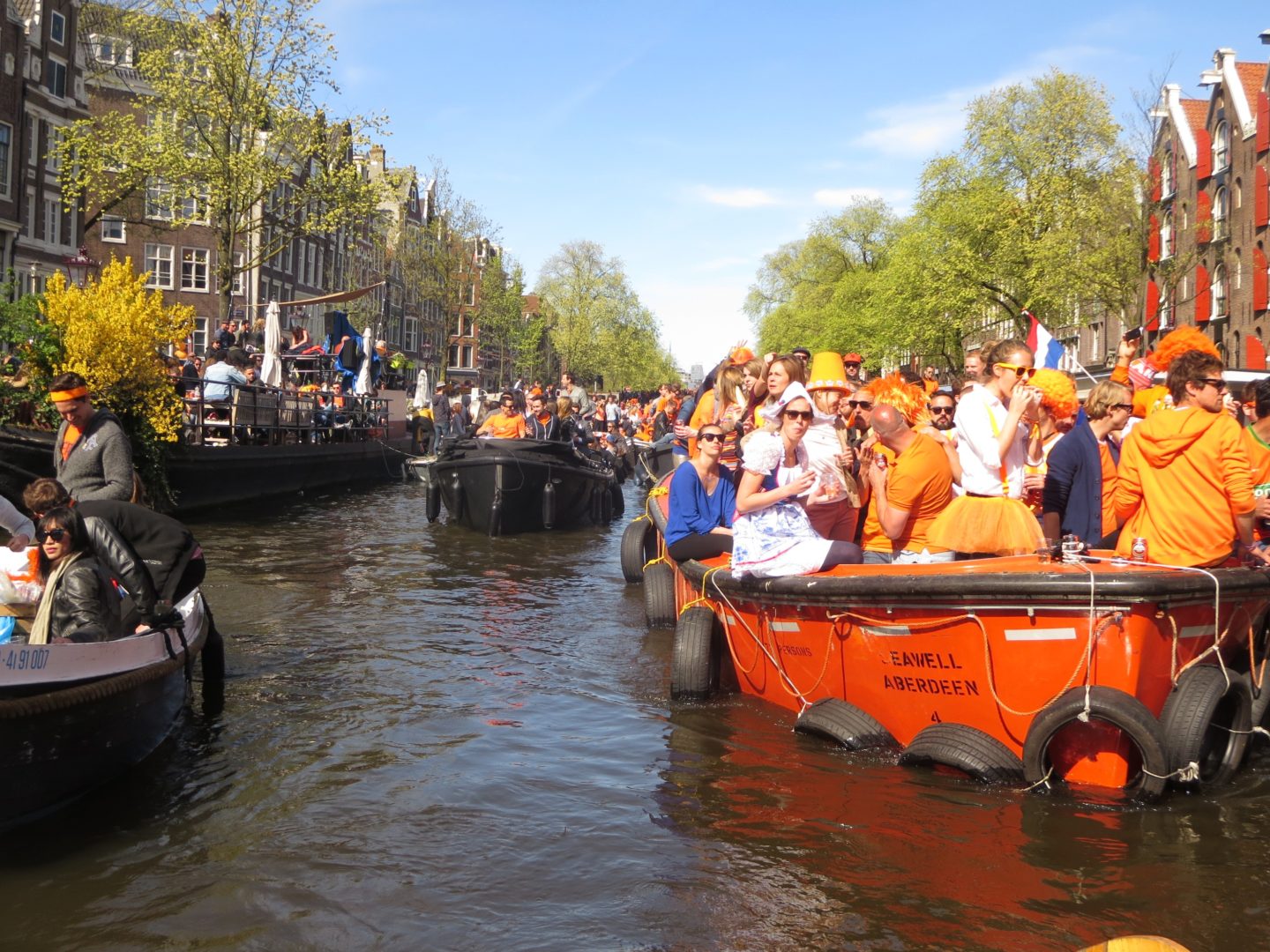 King’s Day in Amsterdam cannot be described in words. While I imagined it to be a jovial street party, it is actually more a mixture of New Year’s Eve and a birthday, the first festival of summer and the Oktoberfest in Munich all rolled into one. With the Love Parade somewhere in between! So anyone who likes any one of these five celebrations definitely should not miss King’s Day in Amsterdam. And those wishing to experience it up close, from an entirely genuine perspective, should be sure to rent a boat.

Want to take a tour of the canals another day? Then take a look here: www.meininger-hotels.com/blog/grachtenfahrten-in-amsterdam