Juicy spare ribs, brown sizzling beef brisket, and wonderfully succulent pulled pork: in barbecue restaurants, there is a lot of smoke about a lot of meat. The sidekicks of coleslaw and pickles are also genuine Southern classics.

Beef brisket, spare ribs and pulled pork: the ‘Holy Trinity’ of barbecue can indeed be learned verbatim in no time at all. “But it takes a lot of fiddling about and intuition until one can master it to perfection”, says Corinna Götz. She and her partners at Little Wolf have the experience, and they have been serving typical Southern soul food at the small but excellent diner in the middle of Munich for a good year and a half.

The large pieces of meat spend between five and seven hours in the smoker, the fiery heart of the cosy location in the Glockenbach district. The length of time that it takes the ribs and beef brisket to cook in the cherry wood or hickory smoke, at a temperature under 120 degrees, to become so tender that it almost falls off the bone depends on the meat. “Every animal is different”, Corinna Götz points out. And, unlike in BBQ’s land of origin, Little Wolf uses local beef from the region instead of US beef – something that also influences how it is handled, because the meat from local ruminants is not as uniformly marbled (traversed with fat) as that of its American relatives.

“We cook in the Southern style, but use regional products and follow recipes that we have worked out ourselves”, says the Munich inhabitant of her cooking approach. This also goes for everything that comes along with the meat. All the sauces, dips and side dishes, whether it be cornbread, coleslaw or carrot salad, and even the iced tea, are their own creations. “For example, besides fermenting seasonal vegetables such as celery and beetroot for our pickles, we also ferment watermelon.” While we’re on the subject, vegetarians don’t have to make do with a potpourri of side dishes. Next to baby back ribs, brisket, jerk chicken and pastrami on rye bread, the wonderfully spicy Southern classics without meat also stand their ground on the intentionally small menu: noteworthy is the jambalaya with smoked vegetables and rice, simmered in a tomato sauce and crowned with blue cheese.

Here you can find an overview of our hotels in Munich.

BBQ in Frankfurt am Main

In Frankfurt am Main, BBQ fans have been able to sample their way through the US’s sizzling cuisine since March in Dicke Wutz. Those who might be reminded of the ‘Fat Pig’ in New York due to the cheeky name – in the local dialect, Wutz means none other than pig – would be correct. The Big Apple’s cult address for superb meat has indeed had a great influence stylistically. In comparison with Little Wolf in Munich, the shabby-chic Dicke Wutz restaurant located at the former Union Brauerei in east Frankfurt is significantly bigger, with around 160 seats inside and 100 outside, enabling plenty of guests to relish their hearty food.

The menu also has a lot more going on. Firstly, there are the various sandwiches, piled high with pulled pork and chicken, among others. Secondly, these are joined by a handful of burger varieties and steaks from the lava stone. Finally, pizza, antipasti and fish have been included to the repertoire, upon the explicit request of guests. But as managing director Mürvet Agca emphasises, “Our undisputed bestsellers are certainly the platters with the specialities from the smoker”.

Not only can you be cooked for and waited upon at Dicke Wutz, but you can also sizzle yourself. At two special tables it is possible to try out your own skills on a charcoal barbecue, while at the butcher’s counter you can receive help in selecting just the right cut for you. Those who definitely want to be their own grill master should absolutely book in advance. 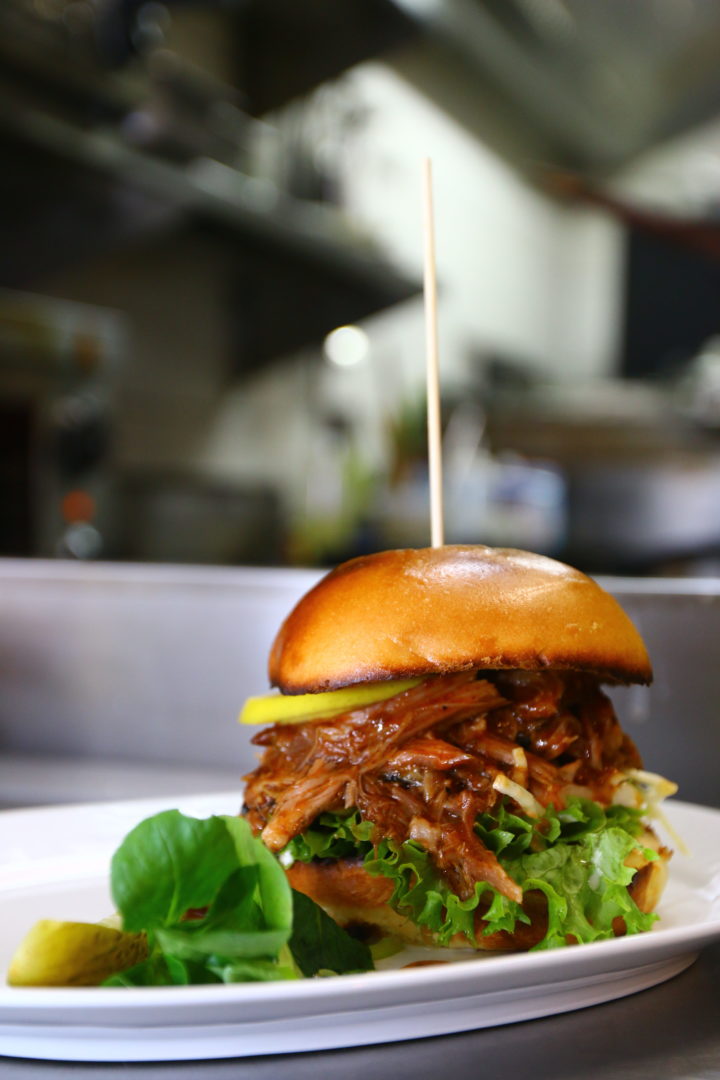 In Berlin, there are at least a half dozen possible alternatives if your desired BBQ location has a full house or an empty oven: for example, Blackbeards in Prenzlauer Berg or Chicago Williams in Mitte. One of the first addresses to check out for Southern style meat in Kreuzberg, however, is Big Stuff Smoked BBQ under the roof of the Markthalle Neun, home and cradle of the legendary Street Food Thursday. When Anna Lai and Tobias Bürger started there in 2012, they were both pioneers in the local street food scene, but relative newcomers to the restaurant trade. Anna, a native Italian, started out as a journalist, while Tobias, a native of Bavaria, is a trained pattern cutter for the fashion industry. They discovered and cultivated their passion for traditional soul food together in New York. 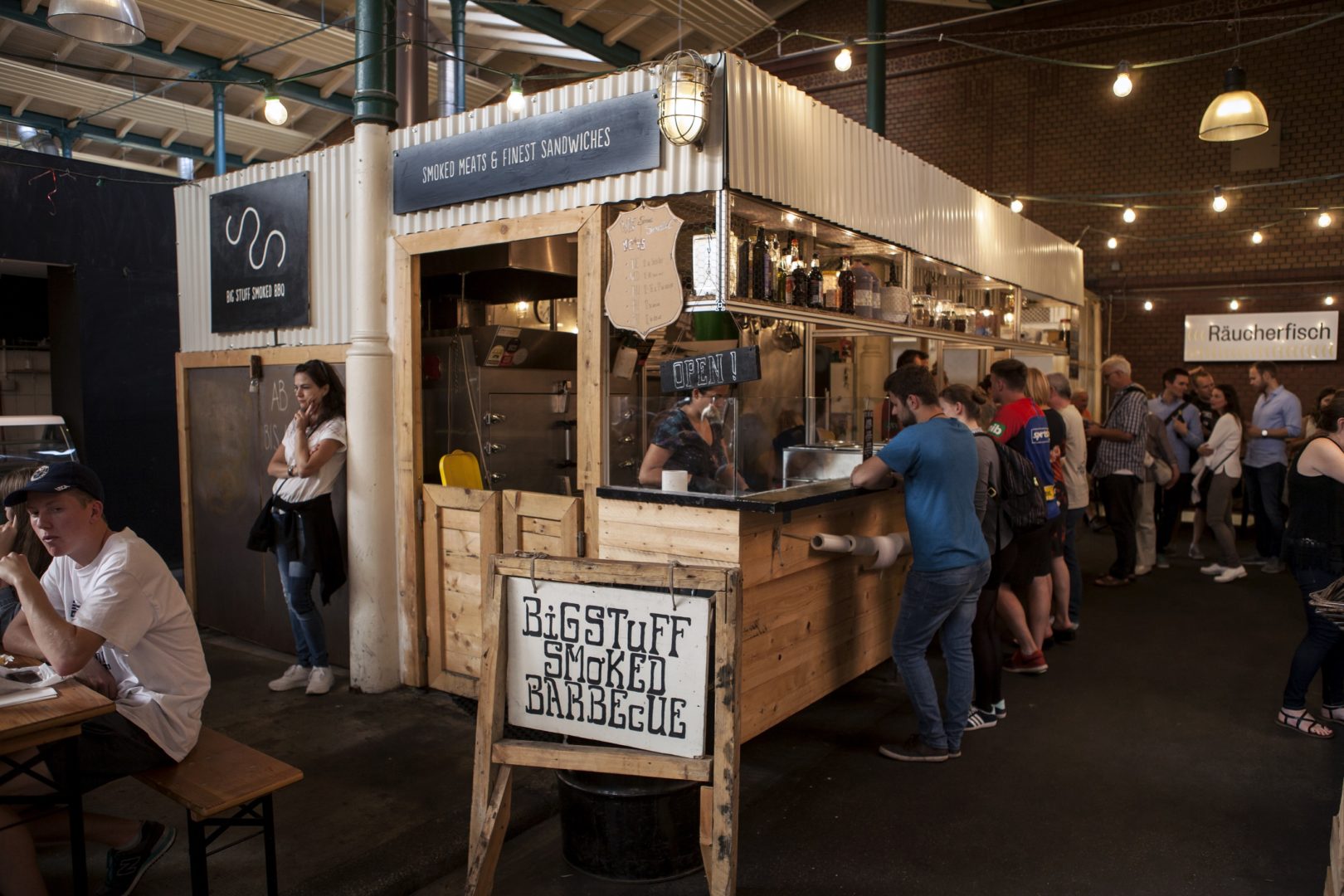 At the market stand that they built themselves, the two feed the smoke oven from Tennessee with selected cuts of beef and Duroc pork from Germany: breast, cross ribs, neck, belly. What happens to it is an open secret. “In principle, everyone can look over our shoulders. Everything that we do happens in front of the eyes of our guests”, says Tobias Bürger. The menu is as stripped back to the basics as the individual components: sandwiches with three varieties of filling, and three mixed plates in sizes S, M & L – that’s it. Specials do regularly bring variety to the fixed program, however.

Sauces and extras such as black beans, smoked potatoes and homemade fermented vegetables are kept as simple and pleasantly unobtrusive accompaniments. Because at the end of the day, the Big Stuff philosophy is that it is the meat, cooked to perfection, that should play the starring role. And because it first reaches its peak after many hours cooked at a low temperature, the same rule applies here as it does in all good BBQ restaurants and smoke houses: sold out means sold out. Those who come early are guaranteed the best selection. In this case, the early bird really does catch the worm…

Here you can find an overview of our hotels in Frankfurt am Main.