Top Things to Do in Prenzlauer Berg

When you step out of the front door of the MEININGER Hotel Alexanderplatz, you will be right there. This is where it starts. Behind you is the TV tower and the Mitte district, and in front of you is the Prenzlauer Berg district that spans over 10 km². It is known for its East German history, its abundance of old buildings, the overground U-Bahn stations, possibly the best currywurst in Berlin, lots of pretty little shops, countless restaurants and a few clubs. That’s reason enough to take a day to explore this part of Berlin. Coming up with a plan for exploring such a large district from scratch is rather difficult. We have asked Nicole, a Berlin local, what are the top things to do in Prenzlauer Berg?

How to spend a day in Prenzlauer Berg?

Prenzlauer Berg is so large that you can’t describe it as a single neighbourhood, it is more like a whole lot of neighbourhoods; 15, to be precise. These include the Kollwitzkiez, the nordische Viertel [Northern Quarter], the Gleimviertel and the Bötzowviertel. Each of these neighbourhoods has everything you could need. As such, many locals in Prenzlauer Berg are rarely tempted to leave their neighbourhood. That would be a shame, because there is plenty to explore all over this huge district. 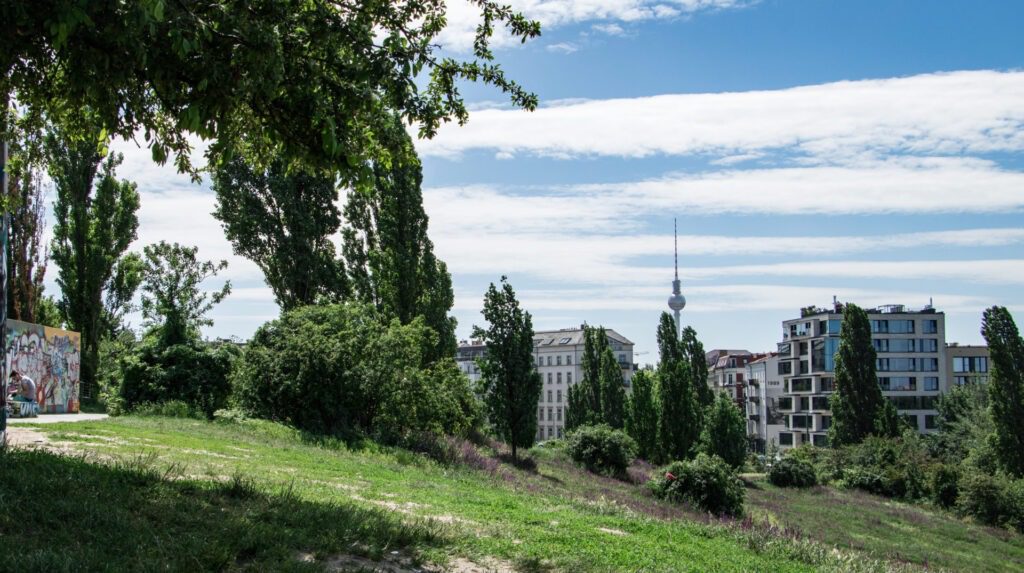 Ideally, you should start a day in Prenzlauer Berg with a really great breakfast

It is anything but slim pickings. You will be spoilt for choice. One reliable option that is particularly popular during weekends is Café Krone at Oderberger Strasse 38. From spicy shakshouka to avocado toast with poached egg or delicious pancakes – the menu offers everything you need for a great breakfast.

If you are overwhelmed by such a wide selection or simply fancy some porridge, you must try out the outstanding creations at Haferkater at Eberswalder Strasse 26. My favourite is the Waldbeerkater. That’s porridge with a forest fruits compote, roasted coconut flakes and dark chocolate. The Apfelkater with home-made apple purée, walnuts and cinnamon is also fantastic. The coffee is equally delicious. 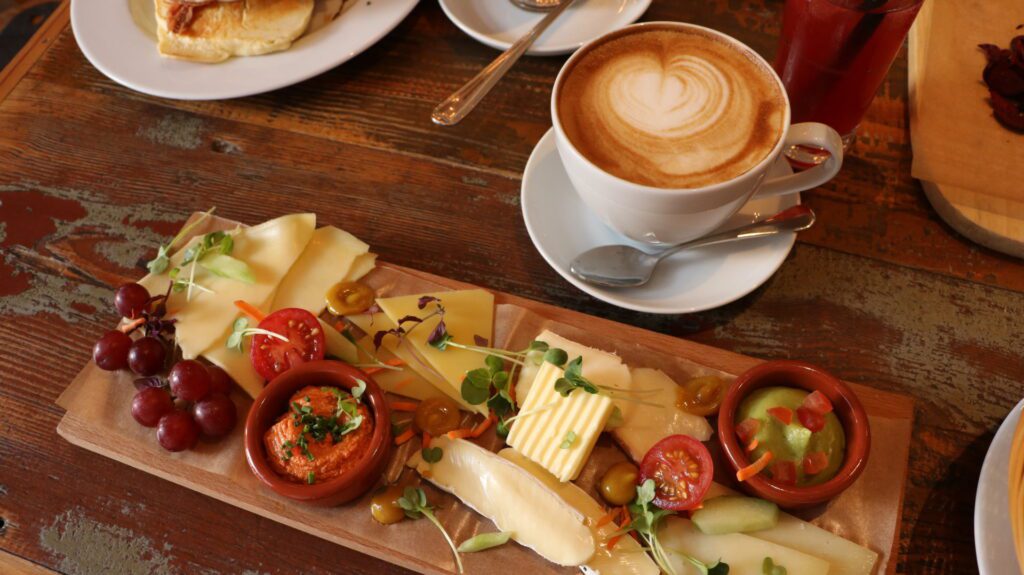 If you like specialty or third-wave coffees, you will have to prepare for a caffeine shock on your day in Prenzlauer Berg. That’s because two of the best coffee shops and roasters in Berlin are located close to the restaurants I recommended for breakfast.

One is Bonanza Coffee at Oderberger Strasse 35 (just a few doors down from Café Krone), and the other is The Barn, a renowned coffee roaster at Schönhauser Allee 8 (only a few metres away from the Meininger Hotel Alexanderplatz). And those are only the closest ones: there are plenty more to discover.

On the streets of Prenzlauer Berg

After breakfast, head to Kastanienallee. This road connects Prenzlauer Berg with the Mitte district and is super lively. The many restaurants and cafés are popular places to meet. Between them, you can find boutiques, stationery shops, concept stores and record shops. As you wander around, you will be surrounded by Berlin’s history. That’s because the houses around you have seen it all. Prenzlauer Berg is one of the districts with the highest number of old buildings, and the oldest one in the district is at Kastanienallee 77, built in 1853. It’s incredible to think of all the things that building has been witness to. Both the First and Second World Wars, as well as the division and reunification of Berlin.

Then, carry on towards Schönhauser Allee. At the junction, you will see a food stand in the middle of the street. 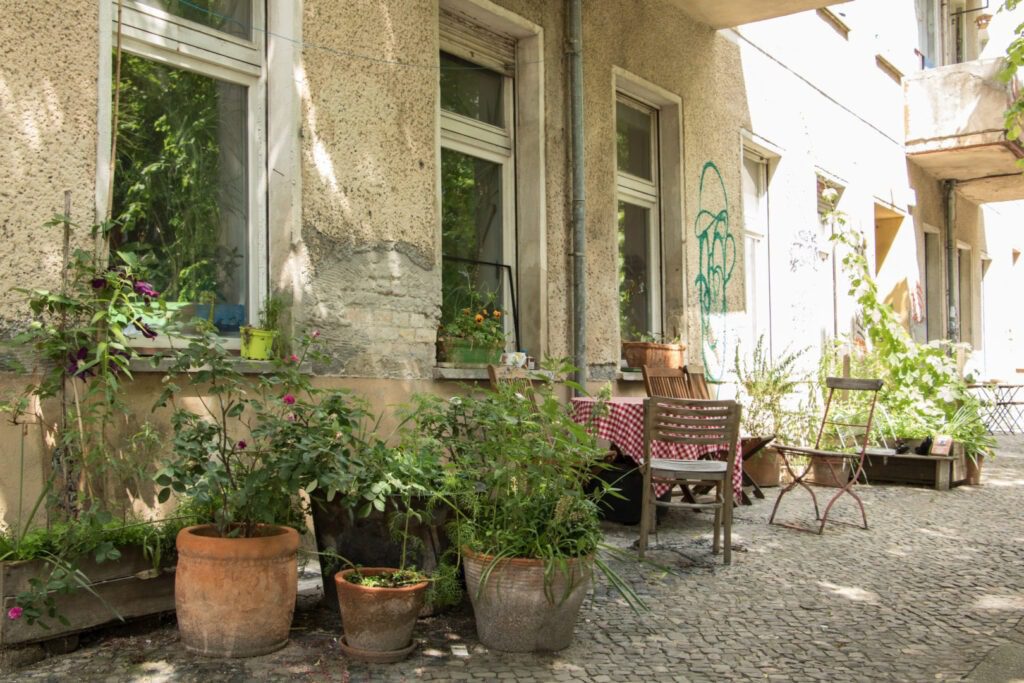 That’s not just some ordinary fast food stand, that is Konnopkes; the best currywurst stand in Berlin

At least that’s what they believe in Prenzlauer Berg. Although there are some disputes about whether Konnopkes in Prenzlauer Berg or Curry 36 in Kreuzberg makes the best currywurst in the city, one thing is certain: Konnopkes has been around for longer, since 1930. Currywurst has been sold here since that time, along with the curry ketchup made to a family recipe. So, if you’re feeling peckish, you should definitely make a stop here and treat yourself to a Berliner Currywurst with “Pommes rot-weiss” (chips with ketchup and mayo).

After that, you can take a trip to Schönhauser Allee, more specifically to Schönhauser Allee 63. There stands a small box that has become very popular: a photo booth that will give you a strip of 4 photos in a retro style for just 2 euros. A cheap and truly lovely memento of your day in Prenzlauer Berg.

If you like flowers, you should hop over to the other side of the road

Because diagonally across from there, at Schönhauser Allee 127, you can find the Blumencafé. As the name suggests, it is a flower shop and a café rolled into one. Here, you can enjoy a coffee and a slice of cake among a huge collection of plants. Or you can browse the flower shop for a nice green house plant under the watchful eyes of the two colourfully plumed residents of the shop. If you like unusual sweets, your next shop should be Kopenhagener Strasse 69. 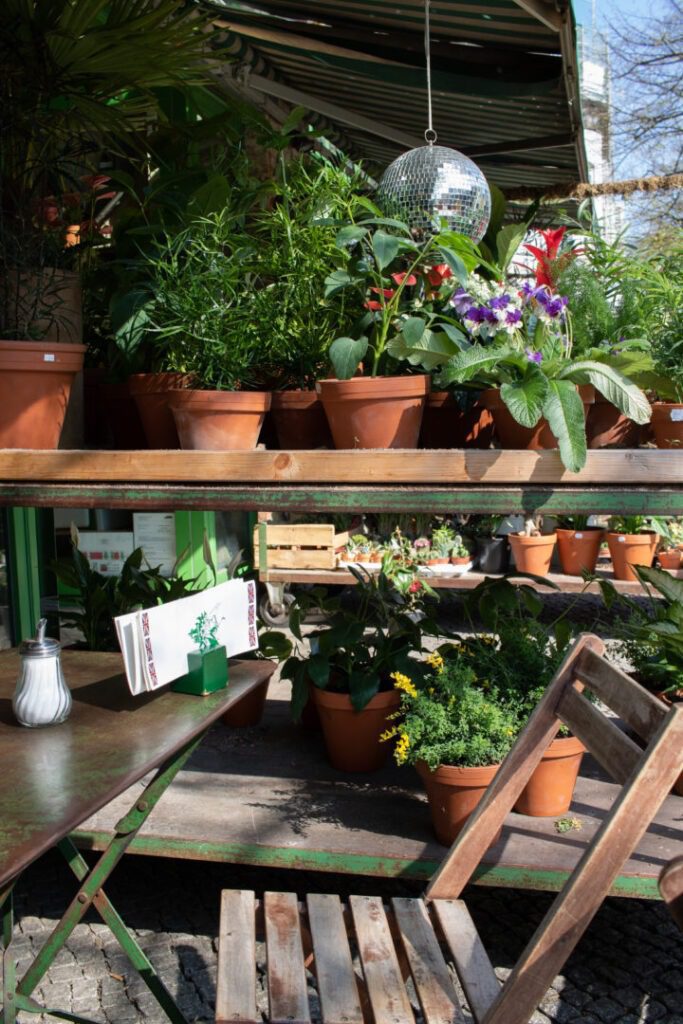 Paradise for those with a sweet tooth

That’s what you can expect at Sugafari. This lovingly decorated shop specialises in selling sweets and candy from all over the world. Matcha KitKats from Japan, peanut butter chocolates from the USA and lots of other tasty treats from faraway lands are sure to make you feel like a kid in a sweet shop. It’s impossible to leave empty-handed. If that’s still not enough sugar for you, you can take a 15-minute walk to Hokey Pokey at Stargarder Strasse 47.

Hokey Pokey has made the news countless times. Firstly because they were the first ice cream manufacturers in the trend that swept the nation. Next, because they became so popular that the local residents complained about the huge number of people outside their front doors, and finally because of their pricey scoops of ice cream. Regardless of the prices, the ice cream is just really tasty and an absolute must on a summer’s day in Prenzlauer Berg. Incidentally, a solution has now been found in response to the local residents’ complaints. The visitors are asked to queue in one direction for the first half of the business hours, and the rest of the time, they queue in the opposite direction. This means that the queue is no shorter, but the traffic jam of ice cream fans at residents’ front doors is distributed fairly.

As you can probably tell, it will be difficult to stick to your diet on a day in Prenzlauer Berg. But before we continue to fill our faces, let’s take a bit more of a look around. Stargarder Strasse is the perfect starting point. I hope you have a bag with you to carry all of your shopping, because I’m going to tell you some of my favourite shops. 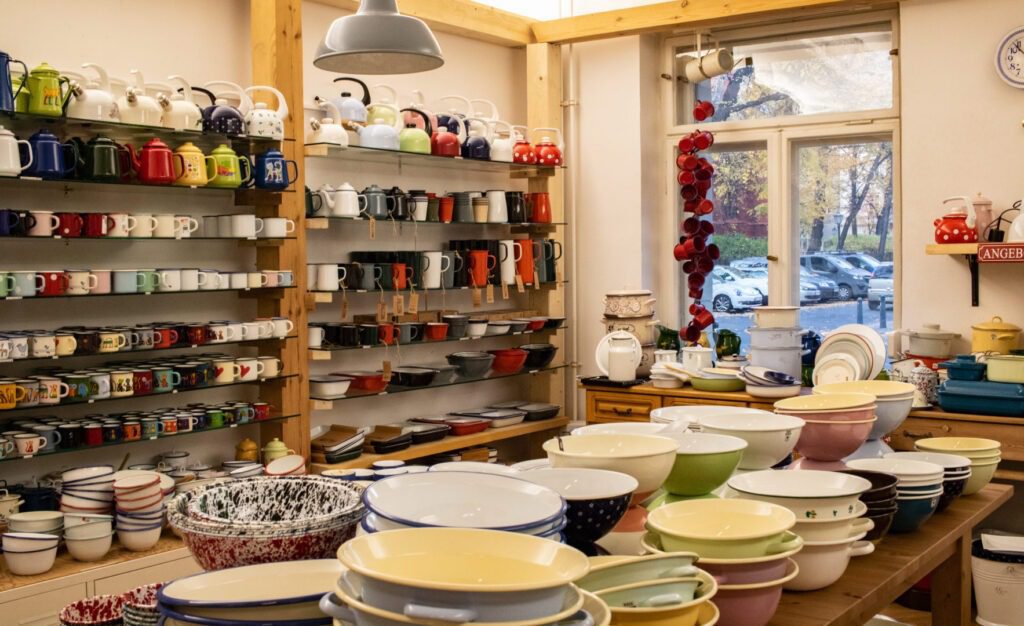 Liv Emaille has a huge selection of stunning enamel kitchenware, from teapots to saucepans.

Second-hand fashion can be found at No Socks No Panties or next door at DEAR.

Yonkel Ork is a cute little shop with stationery, decorative items and lots of pretty accessories for kids.

You can find a refined selection of Polish designer pieces and art at No Wodka. 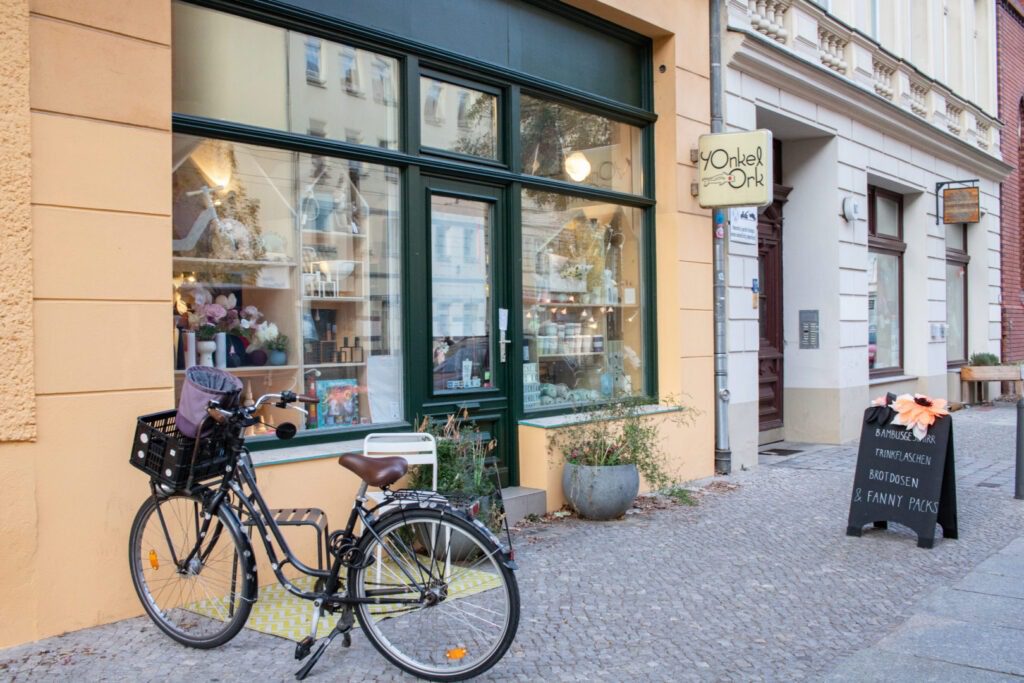 My food favourites for an evening meal are either Takumi Nine or The Bird, depending on what you’re in the mood for.

In my opinion, Takumi Nine has the best Japanese ramen in the city. Whenever I think back on my time in Japan and start to miss it, I always come here. Their food tastes exactly like what I ate at the ramen restaurants in Tokyo. However, Takumi is a very small restaurant and is unable to take reservations. As such, if you visit during their busiest hours, you may have to wait a little while to get a table. But it is definitely worth the wait. 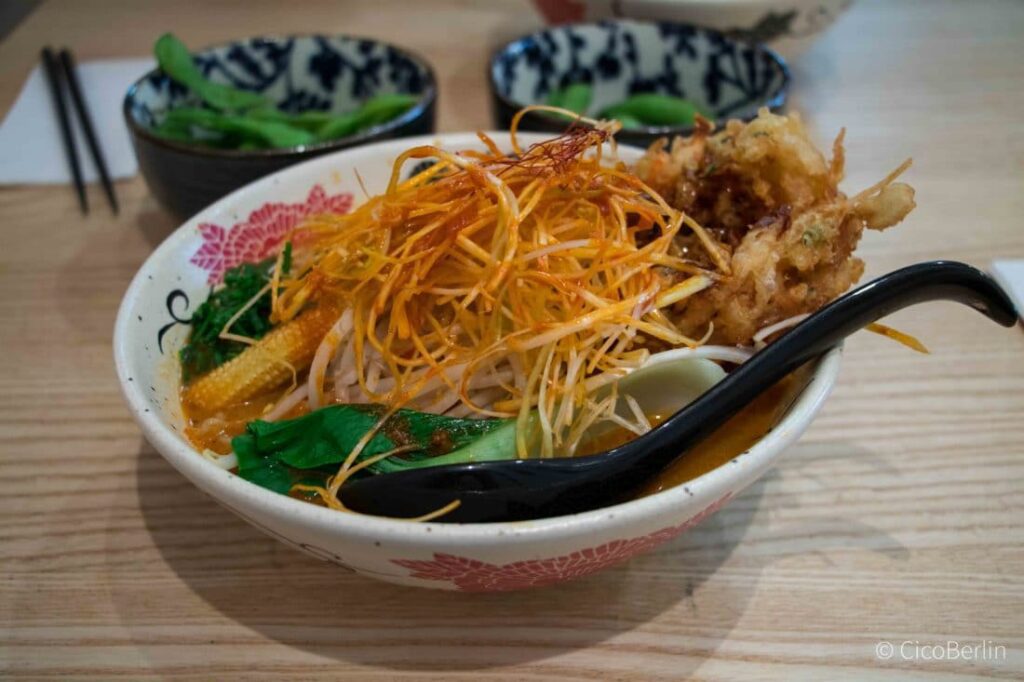 If you’re more in the mood for burgers and steak, you should visit The Bird. They accept reservations online via their website, which makes it very easy to book a table. It’s all very laid back here, from the people to the table manners. Burgers are supposed to be eaten with your hands and should ideally be cooked medium-rare or medium, according to the information on their menu. That’s because they use quality meat and home-made burger patties, which makes a huge difference. Just like you would never order a quality steak well done, the same goes for burgers at The Bird.

And that’s the end of our tour of the neighbourhood. A day in Prenzlauer Berg full of tasty treats, old architecture and cool shops, with a nice little memento in your pocket.

Looking for a hotel for your next Berlin trip?  MEININGER Hotels have 6 central hotels in Berlin.