As travellers, we usually start off by visiting places we’ve heard of. Places where history was written and cities were built. Places everyone seems to know at least a little about. But the more we travel, the more some of us choose to take a different path. A path less travelled and less known in the world. All of a sudden, priorities change and seeing the unseen and unusual becomes more important. Sometimes we walk on foot, but often in large countries we need assistance to cover larger distances – to go further.

My road trip through Argentina’s far north would qualify as a trip to the unknown. In eight days we took a Mini four-wheel drive from Córdoba to Jujuy, crossing 2000 kilometres. Most of the roads where unfinished, washed away by heavy flooding or simply in bad shape. Often we literally went off the map and out of cell phone reception. 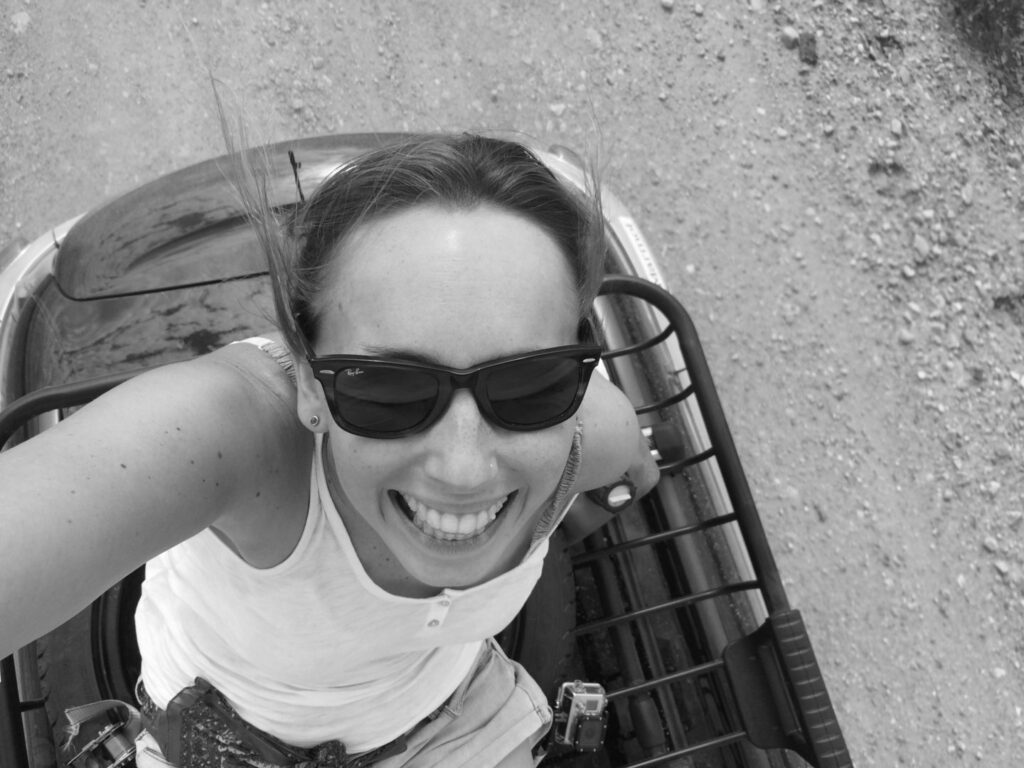 The first night we spent near La Posta in a magical place, surrounded by rocks and wild-running horses. And sheep. Two of which we had for dinner, slaughtered and cooked up on the barbeque by a local family whose hospitality was incredibly generous. They lived a simple life, no telephone, no running water in the bathroom. The parents and children all shared a bedroom and the grandmother lived in the shed next to the small house.  We were allowed to set up camp outside and sleep under a blanket of stars. The frogs in the small stream running through the place welcomed us with a concert, much louder than we could possibly sing. 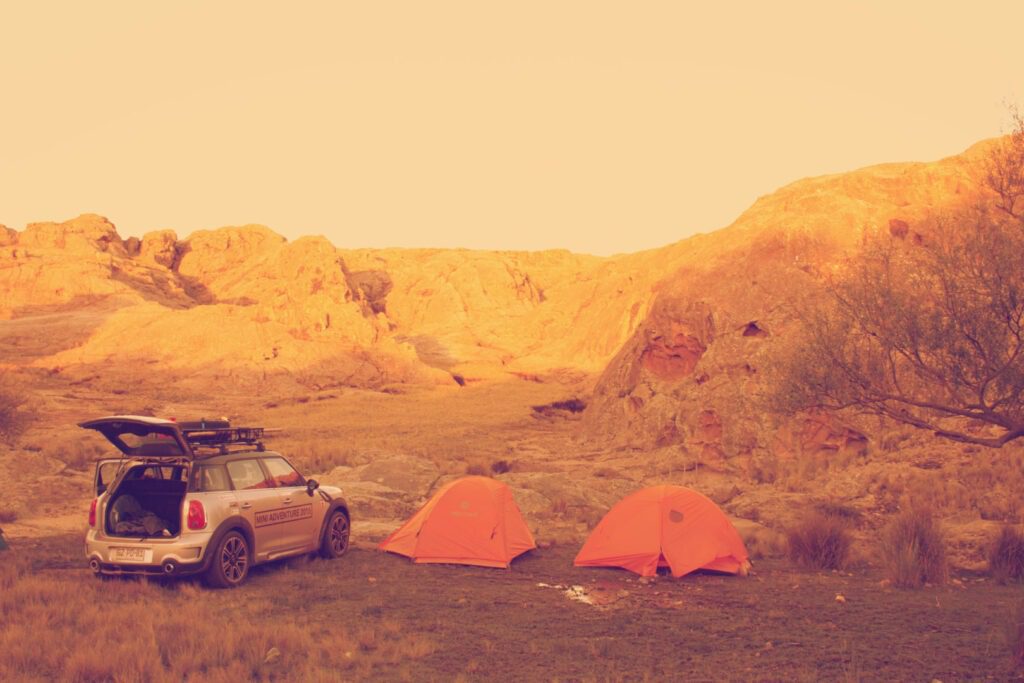 The night was cold and rainy. Sleep was a privilege not everyone had. But there is something about waking up in a remote place that makes you forgive such circumstances instantly. There was a new day waiting for us and a new road to discover.

This road took us further north towards the mountains and a small town called Chepes. “There is no tourist info in Chepes”, informed Eric, our guide. Indeed, as far as Eric was concerned, this is an unknown place even to Argentineans. Entering Chepes, you can see why: there appears to be nothing to see. Staying at a horse range just outside of town, however, revealed a lot. With a vehicle as striking as ours, we were the attraction of the whole town that night. Everyone came to see us and the gauchos set up a show. It was a windy day, and after a long and exhausting drive, just when I felt I needed a break I got one. Not as planned – a nap in the car – but a guided tour through the horse stables. Six local kids and their persistent lack of concern about language barriers convinced me to go with them. We looked at the horses. I had to take pictures. One of each horse, of course. 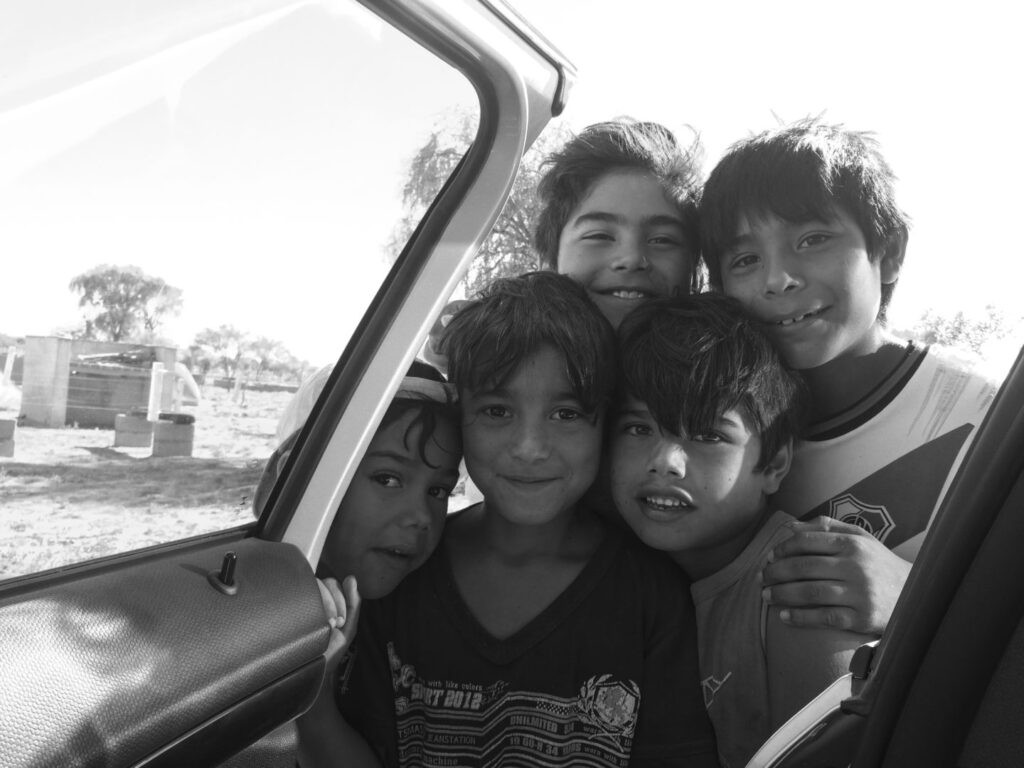 When we finally got back to the car, I felt more at ease than I imagine a nap in a hot car would have made me feel. The only thing I now had a great desire for was a shower. No matter what temperature, no matter where. So we set up a black plastic container with water and a hose with a shower head at the end. Around it we put a tent. Unfortunately, the construction only worked when you squatted on the ground. But having running water washing off the dirt and sand was well worth the complications. I realised it’s the little things that make a trip like this a good one. 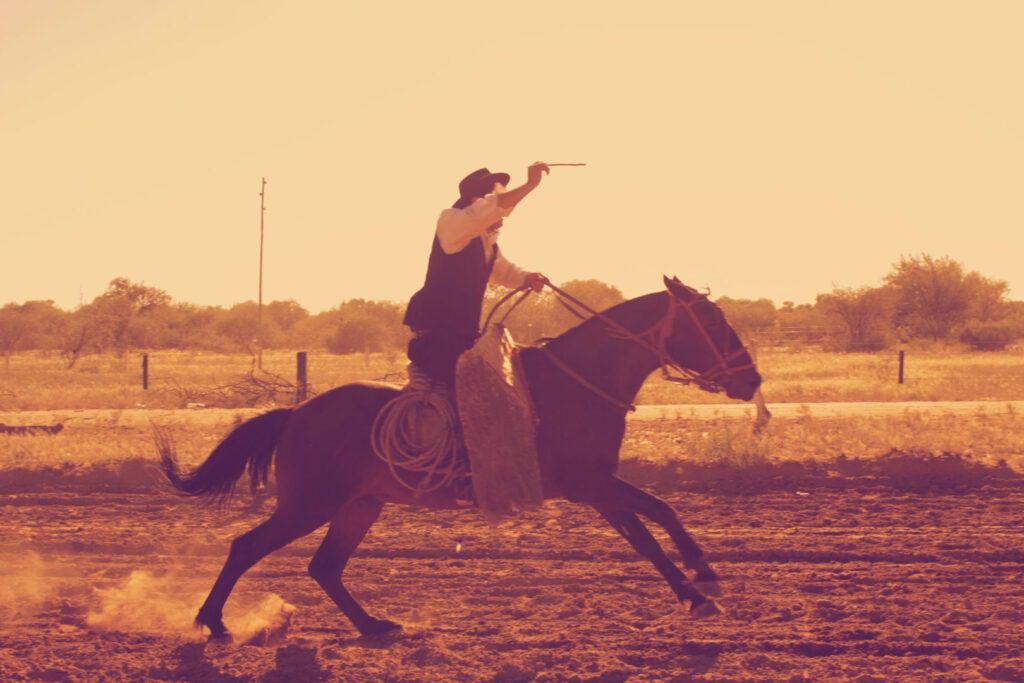 The next few days took us along routes that the Dakar Rally covers during the race. People on the side of the road waved at us and we waved back. I had never before realised how much help an unusual looking car can be when it comes to meeting people. Although there wasn’t much time to stop alongside the road, we did take in a hitchhiker. A young guy from Buenos Aires making his way to see the Valle de la Luna National Park. “Is it a known place in Argentina?” I asked, curious to find out why he wanted to see it. “No”, he replied, shaking his head. We were on the same mission – to see stunning yet little known places. 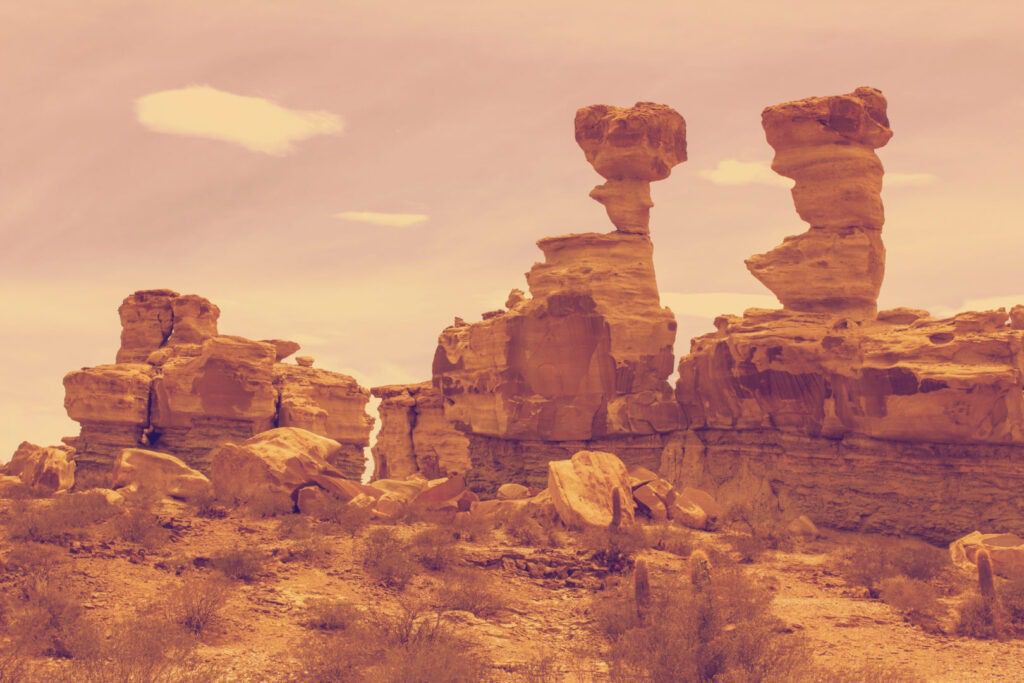 The further we went the fewer people we saw. Up in the Andes, there isn’t much to live on. Antofagasta and Tolar Grande were two of the places we stayed that impressed me the most. The first people to move and explore here must have had a very adventurous spirit. Above 3000 meters the cactus gives way to briars and small patches of yellow grass between endless slopes of loose gravel. And then the salt deserts begin. There are many and they are hard to access, but some have marked roads leading through them. Sometimes we’d drive for three hours to cross one and only make around 70 kilometres because of the conditions of the roads. We drank lots of water to prevent headache from the high attitude, and as bumpy roads and full bladders are a most unfortunate combination, we also stopped a lot on the way. 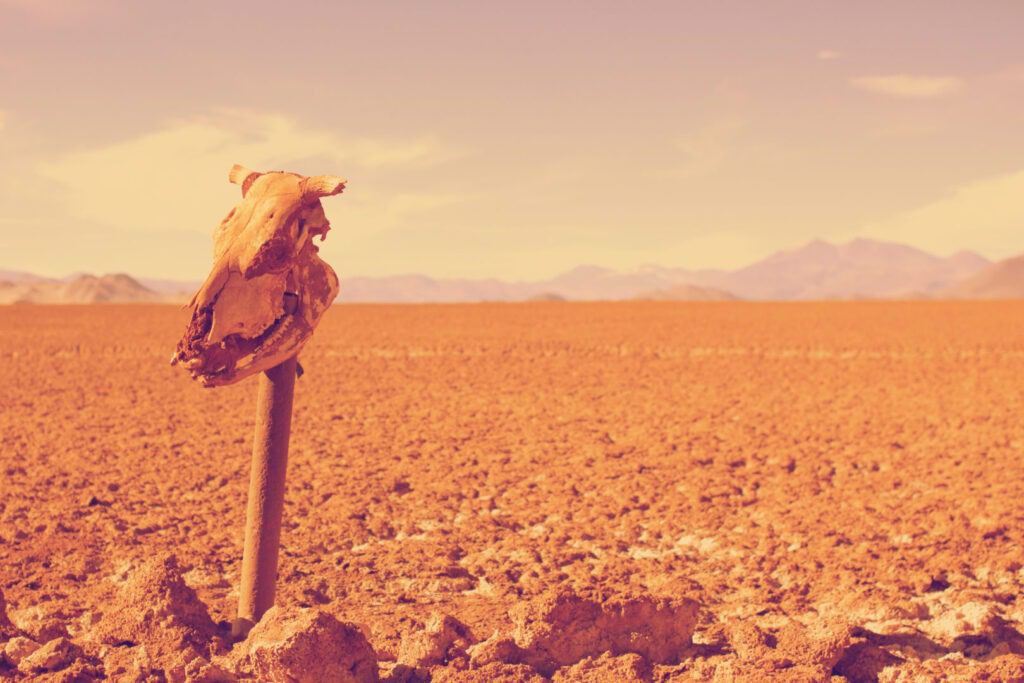 “Another place we won’t ever come back to”, Christoph, my companion, said as we crossed the last big salt desert, heading for the final stop on our trip. A strange sentimentality touched me when thinking about this. “I could come back if I wanted to”, my inner voice said. But isn’t it part of what makes travelling so special and beautiful? Knowing there is only here and now, and after that it will just be a memory of a great trip. An epic trip. 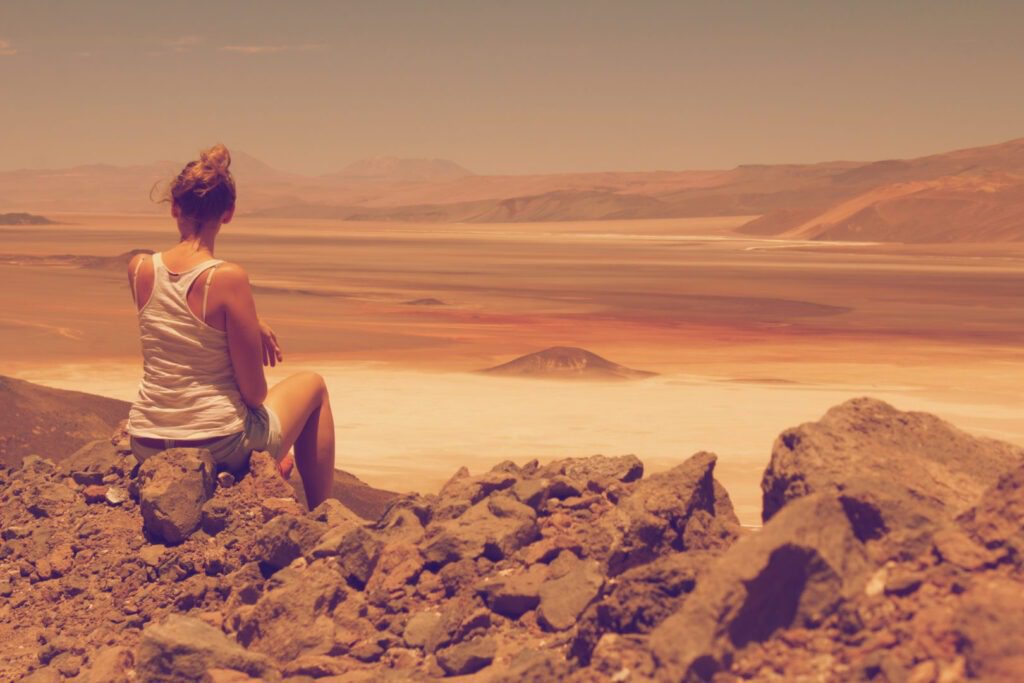