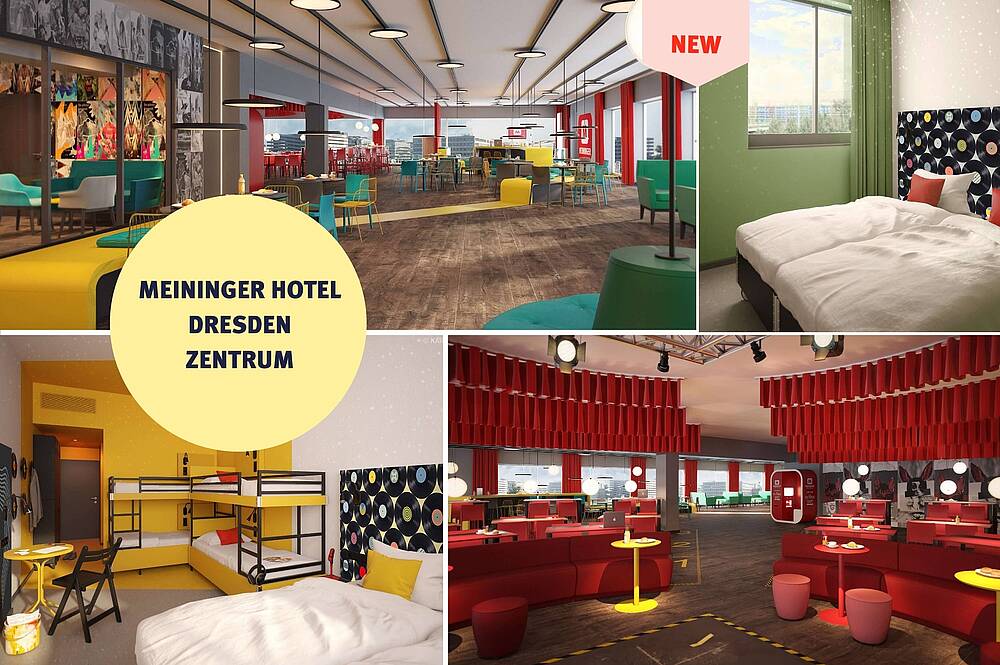 On September 14, the MEININGER hotel group will celebrate its third new opening this year. The MEININGER Hotel Dresden Center at Wiener Platz is the second hotel in Saxony and the 14th location in Germany.

One of the city's biggest hotels

The MEININGER Hotel Dresden Zentrum offers 173 rooms with 719 beds, ranking it among the hotels with the most beds in the city. "We are looking forward to the new, very central hotel in Dresden," comments Thomas Hagemann, COO of MEININGER Hotels. "Between the Central Station and the Central Bus Terminal that will eventually be opened, the hotel is situated in a part of the city that is becoming increasingly more important in terms infrastructure.

On its four floors, the hotel offers different types of rooms for families, backpackers, groups, and business travelers. "For the wide mixture of guests who typically visit MEININGER hotels, we have double and multi-bed rooms for up to six people," says Hagemann. "As is the case with all MEININGER hotels, its facilities include guest kitchens, a bar, and a game zone with a foosball table as standard." From a roof patio with sun loungers, hotel guests can enjoy a wonderful view of the historic center.

Breakfast in the limelight

"Ode to Joy," the poem once composed by Friedrich Schiller in Dresden and later set to music by Ludwig van Beethoven, was the central theme for the music-inspired hotel design. In the lobby, lounge furniture is arranged according to the note progression of the famous Beethoven composition, while lamps hanging like notes from the ceiling, spotlights and red curtains lend the breakfast area a theatrical atmosphere. And the hotel's interior decor adds an unusual feature in its contemporary interpretation of Dresden's musical history: Every guestroom has a glittering disco ball.

Full use of the building has already started

In addition to the MEININGER Hotel, the building on Wiener Platz also houses a 3,800 m2 Edeka grocery store on the ground floor, which has already been open since September 2021. The 204-meter-long and 40-meter-wide building impresses from the outside with its glittering, rainbow-colored facade. Special crystals allow the building exterior to light up in different colors, depending on the viewer's vantage point. Peter Simmel, the building's proprietor and investor, is grateful for how the project turned out: "After a very unusual and challenging construction process with COVID-19 and a building material shortage, I am thankful that we are have reached our goal with the MEININGER hotel. The location right at the Central Station and the future bus terminal, in combination with our grocery store, could not be better. The unique location, view, facilities, and overall flair are guaranteed to delight guests. I hope the MEININGER team enjoys the new building and I wish them lots of success."

Whether it is the Semperoper, the Zwinger or the Frauenkirche, the city's famous tourist attractions can be reached in 20 minutes by foot, and a walk to the historic city center can also include the Prager Strasse shopping mile. The hotel's location will become increasingly more important once the new central bus terminal begins operation in 2025.

The plans for growth continue

With the new opening in Dresden and 13 other locations in Germany, the hotel group currently oversees 7,400 beds in Germany. "The MEININGER Hotel Dresden Center is already the seventh new opening since the beginning of the pandemic, and is once again a result of a major team effort. It is a sign of our resilience as a relatively new hotel brand," says Hagemann. The expansion of MEININGER'S hybrid hotel concept into new and existing markets will continue for the foreseeable future. For the next 12 months, additional hotel openings are planned for Venice and Cologne.