I slowly twist my foot sideways as I get ready to shift my weight and grab the next bar above my head. I pull myself up and dare to take a peek down. There’s twenty metres of vertical space below me with only the metal bars sticking out of the rock. I instantly regret looking down. I shut my eyes for a second and breath in. It’s all in the mind, I tell myself. All in my mind.

The short struggle on the first part of the climb pays off sooner than expected when we reach the first summit. It’s one of many to come as I make my way along the exposed ridge. I’m up on Nordkette, a mountain range in the Austrian Alps, climbing the “Innsbrucker Klettersteig” for the first time. It’s still early in the day and the sun is only just warming up. As for me, I’m sweating like hell and loving it already. Once I’ve settled into a rhythm using my gear, there is oh so much to look at! 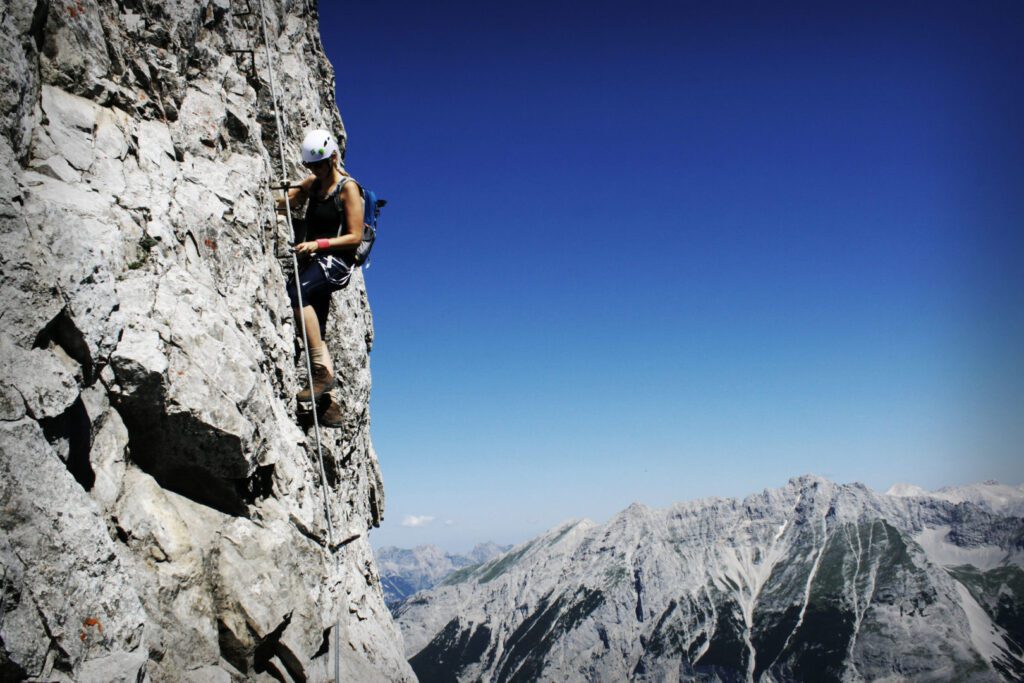 On the left side I look down to the alpine capital of Innsbruck and on the right the Karwendel Nature Park reveals itself. It’s a good day for this popular yet demanding climb. Locals and tourists, families with kids as well as a few athletic-looking older people clip and unclip their way across. It’s a busy day at a place that used to be unreachable for most before the invention of the Via Ferrata.

Via Ferrata – Italian for iron path – make remote, rugged regions accessible to bigger crowds. In recent years, Klettersteige – the German term for it – have snowballed in popularity in Europe, especially in the Alps, where they reach from Italy to Austria and Germany and further west. It’s not for the faint-hearted or those afraid of heights. But it’s a great, safe way to scale to new heights and it’s easy to get hooked. The mixture of overcoming your fears, accessing remote places and being outdoors is attractive to many.

Iron paths were originally built during World War I to move Italian troops safely and quickly through rough mountain terrain. This was much needed as many of the Italian soldiers came from the south and had never seen snow before, let alone climbed a mountain. The treks across cliffs and along ridges are usually secured with fixed cables, ladders, bridges, stair steps, bolts and shaped stone grabs. Modern routes are often funded and maintained by local governments to attract tourism to the area and can be found in most places where there are mountains.

As opposed to rock climbing where falling isn’t unusual, the Via Ferrata technique is based on the idea of not falling, with a safety back-up in case you do. Start slowly on an easy training ground and take a guide for your first steps along the wire. Once you’re set, you can pick a trek that’s right for you, using the ratings A-E. A-B treks are pretty easy for most, C comes with the first tricky vertical climbs, D usually has exhausting parts, and E often reveals overhanging rocks and long, strenuous ascents. 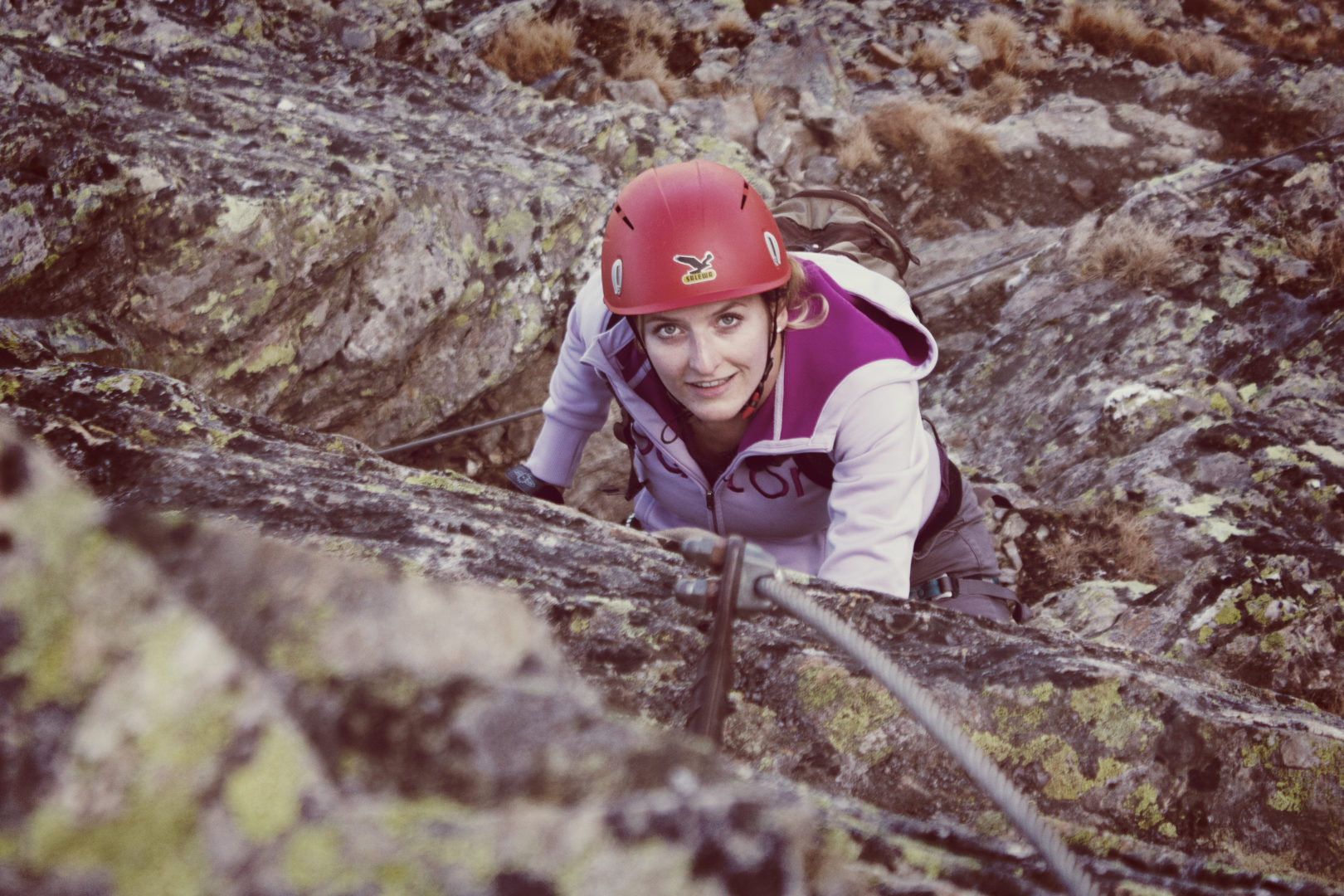 Austria is a good place to start with Via Ferratas, as they’re usually well maintained and adequately signposted. Here are some nice ones across the country: 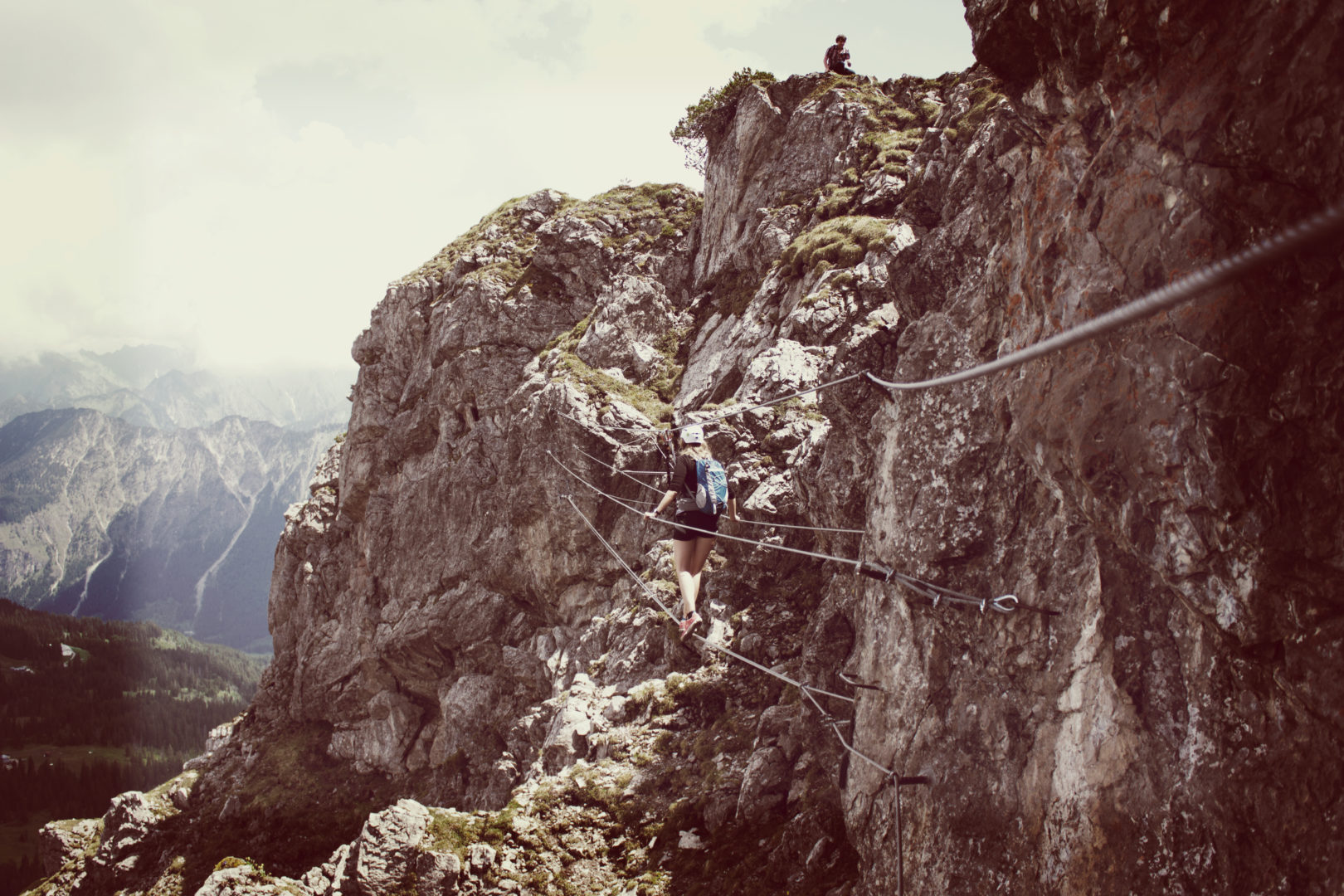 Innsbrucker Klettersteig (B-C), Tirol: breathtaking views, easy ascent with the gondola, but make sure the weather is stable and you have plenty of time.
Stuibenfall (C), Ötztal: easy climb with lots of steps for children. Fun bridge over a waterfall at the end.
Drachenwand (C-D), Salzburg: steep climb but beautiful Mondsee lake views from the top.
Hohe Wand (A-E), near Vienna: a great place to start as you have a choice of several climbs starting from A-C, but also including the Blutspur trek (E). 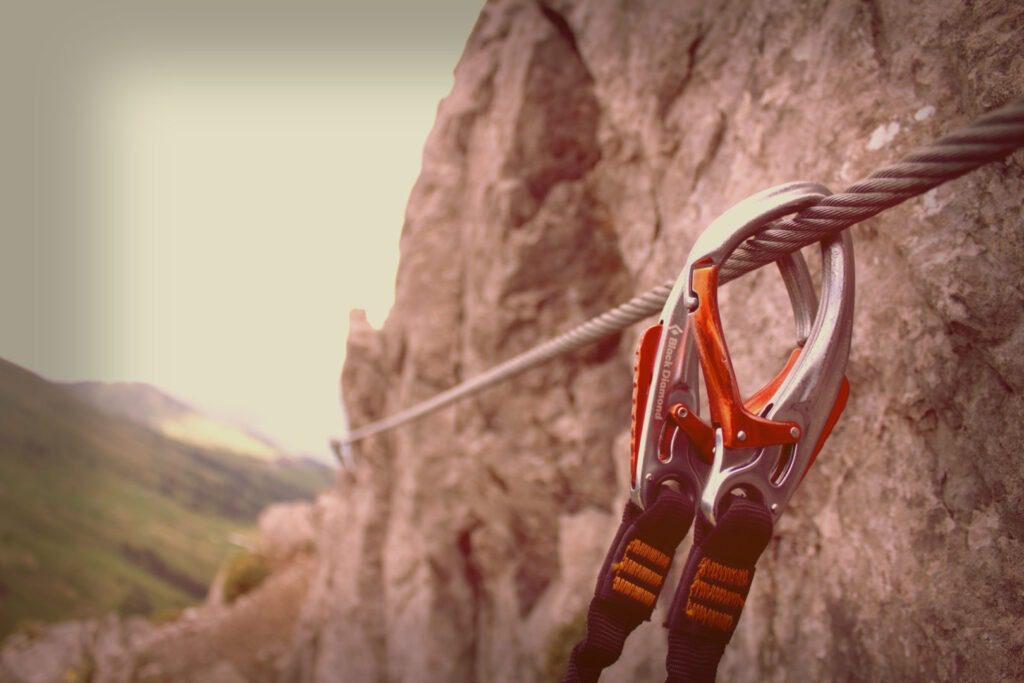 Tips for via ferrata