Zapping from TV station to TV station, everywhere you look people are frying, filleting and flambéing. Cooking is cool, and plenty of hobby chefs fantasize of one day starting their own restaurant. Restaurant Day is the celebration of this specific dream. On this particular day, anyone can open up their own restaurant. It all started in Helsinki in 2011 as a protest against bureaucracy, and ever since it has grown to become the biggest international street food festival around.

When was the last time you did something completely mad? Discarded all rules and regulations to set yourself free? You don’t remember? Well, no wonder. In a society where everyday life is regulated by countless laws and prohibitions, creative ideas can be difficult to carry out. It’s a pity, really. That’s what 34-year old event producer and journalist, Timo Santala always thought, anyway. In the summer of 2011, Timo’s friend Antti Tuomola, who was working in the food service business, shared his frustration about the fact that opening up a restaurant is accompanied by too much bureaucracy. Discussing the matter with their mutual friend Olli Sirén ultimately resulted in the idea of organising a food carnival in their hometown of Helsinki. This idea gave the initial spark for a project that was soon to revolutionize the city’s food culture. It was the birth of Ravintolapäivä which translates as Restaurant Day – everyone has the opportunity to open their own restaurant, bar or café for a day: in their home, garage, or office, from their backyard or on a street corner, or from the luggage compartment of their car. Timo and Antti’s bar on wheels that they opened up on their first Restaurant Day was a huge hit. The tapas served by the two buddies were quickly sold out. 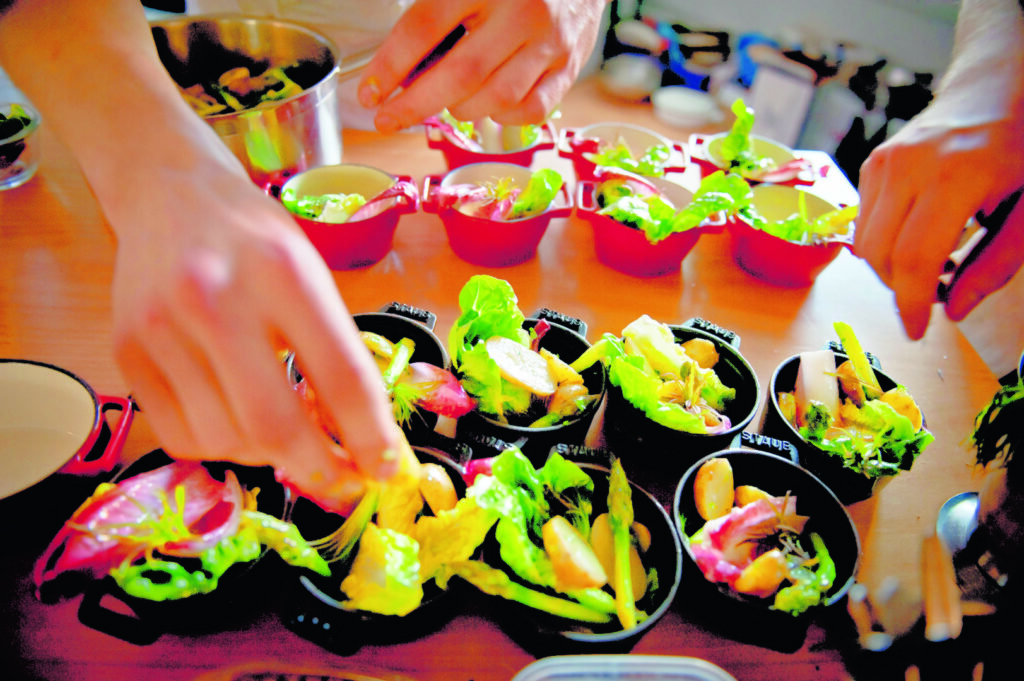 Since then, four times a year, Helsinki’s streets, parks and squares transform into a day-long festival of delicate delights. On almost every street corner, people dine on plastic chairs and upturned beer crates as they delve into the flavours of the countless pop-up restaurants. The selection of food offered is abundant; next to the sizzling spicy Thai woks, famished flâneurs will come across Spanish tapas, Oriental rice dishes, sandwiches with appetizing vegan spreads, Russian pirogi or ice-cold lemonade. Everything is homemade and created with passion and love from Grandma’s unforgotten recipes and beyond. And what makes the event so special is the social aspect of it all. No one is left to feel lonely, and the fact that not everybody speaks the same language simply adds to the pleasure. If necessary, everyone can communicate sufficiently with the help of creative gesticulation and a bit of broken English. And before you know it, you have made a new acquaintance over a cup of beetroot soup or a chocolate chip muffin. 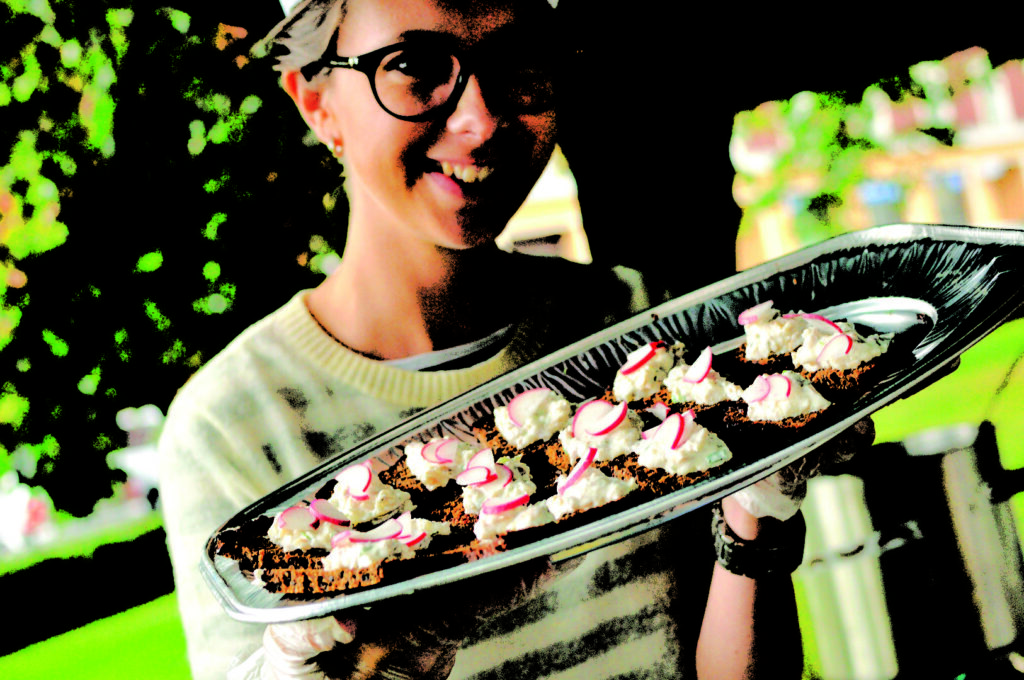 As with most of the vendors, at the food stand of Ursula Stocker you can simply stop by spontaneously. Four years ago, the German contributor migrated to Finland with her husband for professional reasons, and today she sells home-baked cakes and pies to the public from the harbourfront of the Eira district. It’s a logistical challenge, and not only because she has to bring her own utensils, chairs and tables from home: “There’s no electrical power here”, she says, “but luckily we have friends in the neighbourhood who are constantly providing the coffee via shuttle”. But to Ursula, the inconvenient circumstances are simply part of the whole experience: “It just makes me happy to bake for others and spoil them”. Her dream of having her own café is still alive and kicking, even if it’s just for 24 hours. And sales at her Café BAVARIA are remarkable. The guests can’t seem to get enough of her delicacies, and 250 slices of cake with apple and crumble, blueberries or cranberries that Ursula has picked herself in the Finnish forests, as well as cheesecake and chocolate cake, are handed over the counter during the day. In the evening, everything will be sold out, and Ursula’s confectioner’s heart will be turning somersaults. 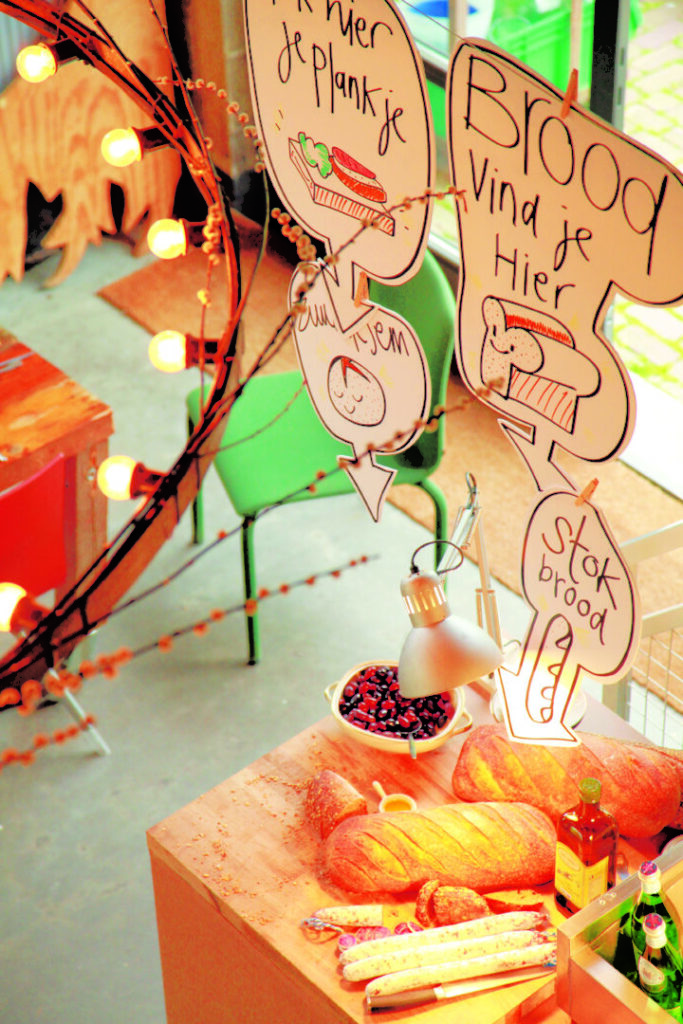 For other one-day restaurants, you have to book in advance, e.g. on the host`s facebook site. In the evening or in unfavourable weather conditions, most vendors open their private homes to serve their customers, both familiar faces and total strangers alike. One of them is Eija Antinoja. On Facebook, she announces that her Finnish/Japanese menu will be served in her apartment in the Haaga district. The unusual combination is due to the fact that her family is currently accommodating a Japanese exchange student. “That’s why I called my restaurant Koto-kahvila”, Eija says. “‘Koto’ is Japanese and means ‘home’, but it is also the name of a Japanese instrument”, she explains. The 61-year-old translator is treating her guests to lasagne with eggplant and mozzarella, a lentil stew with chorizo and sushi that Eija has prepared with the help of her Japanese exchange student. The second course is coffee with korvapuusti, which is a sort of cinnamon roll with the unofficial status of Finland’s national treat. Eija enjoys cooking for a lot of people, though she admits that it is also a lot of work: “Yesterday, I was cooking all day”, she says. In the evening, all of the chairs are filled and the guests are laughing and chatting away.

Eija tells us that normally the Finns aren’t exactly outgoing. But within half an hour, her living room is buzzing and as full of voices and cheer as never before. The guests are pleased with the food and are all having a good time. And so is Eija. There is no doubt that next year she’ll be at it again.

The Finnish aren’t the only ones feeling the street food craze. Restaurant Day has fans around the globe. In 72 countries, including China, South Africa, Germany, Nepal, New Zealand, Kazakhstan and Mozambique, about 88,000 hobby hosts have registered around 22,000 restaurants and are ready to serve roughly 2.5 million guests worldwide.

The next Restaurant Day will take place on Saturday 21 November, perhaps in your city as well. Maybe you want to join? You can find all the necessary information for future hosts on: www.restaurantday.org