Southeast Asia Travel: From Saigon to Singapore by Longboard

After skating with my longboard from Germany to Istanbul last summer, I was ready for an even bigger adventure: I wanted to skate from Saigon to Singapore. To push myself to the limits, to experience, to grow, to travel. Along the way, I weaved through the most intense traffic I’ve ever seen, discussed global politics with Cambodian monks, became a pop-up Thai celebrity, and sweat more than I ever thought humanly possible.

After arriving in Saigon, it took me five minutes to realise that the traffic was much heavier than anything I had ever seen before. It was very chaotic and simply impossible to count the motorcycles. When I left the hostel and skated down the first road, I was super happy that the trip had finally started, but scared at the same time. Fortunately, the traffic turned out to be much easier to skate through than I had expected. After about two hours of tiring pushing through the city, the traffic started to thin, there were fewer houses and people, and instead more and more rice fields and even some cows. 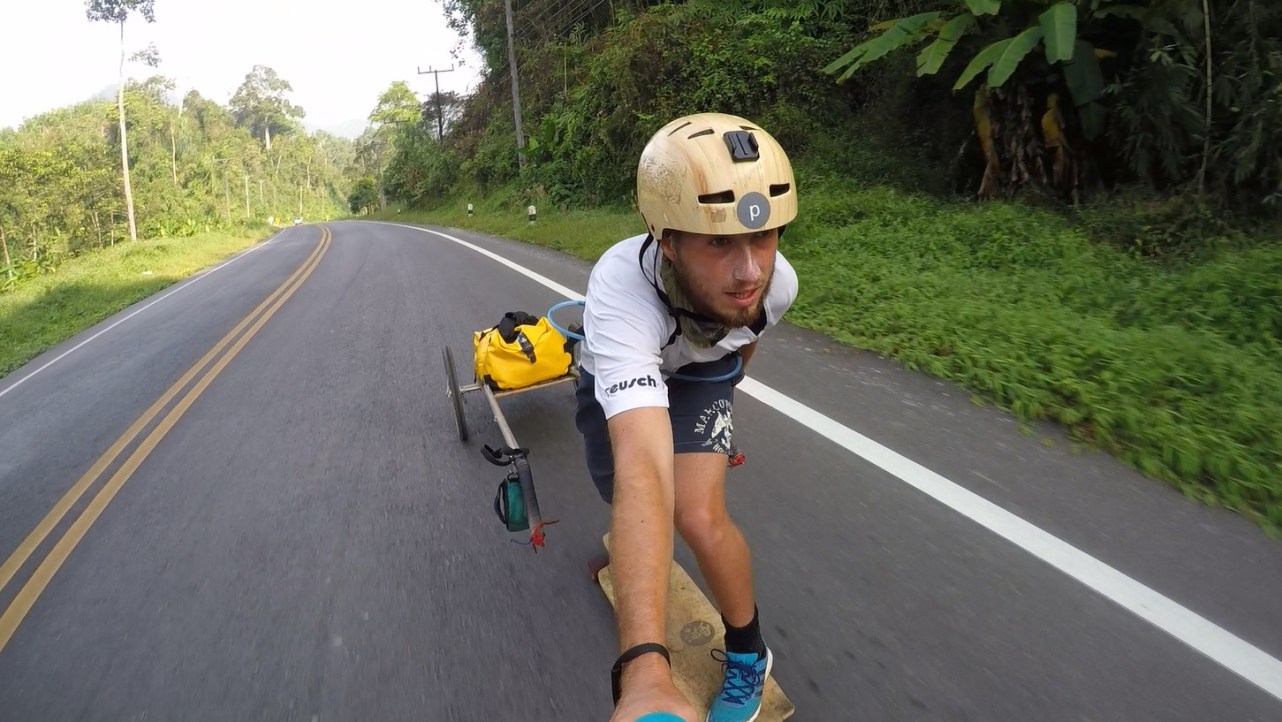 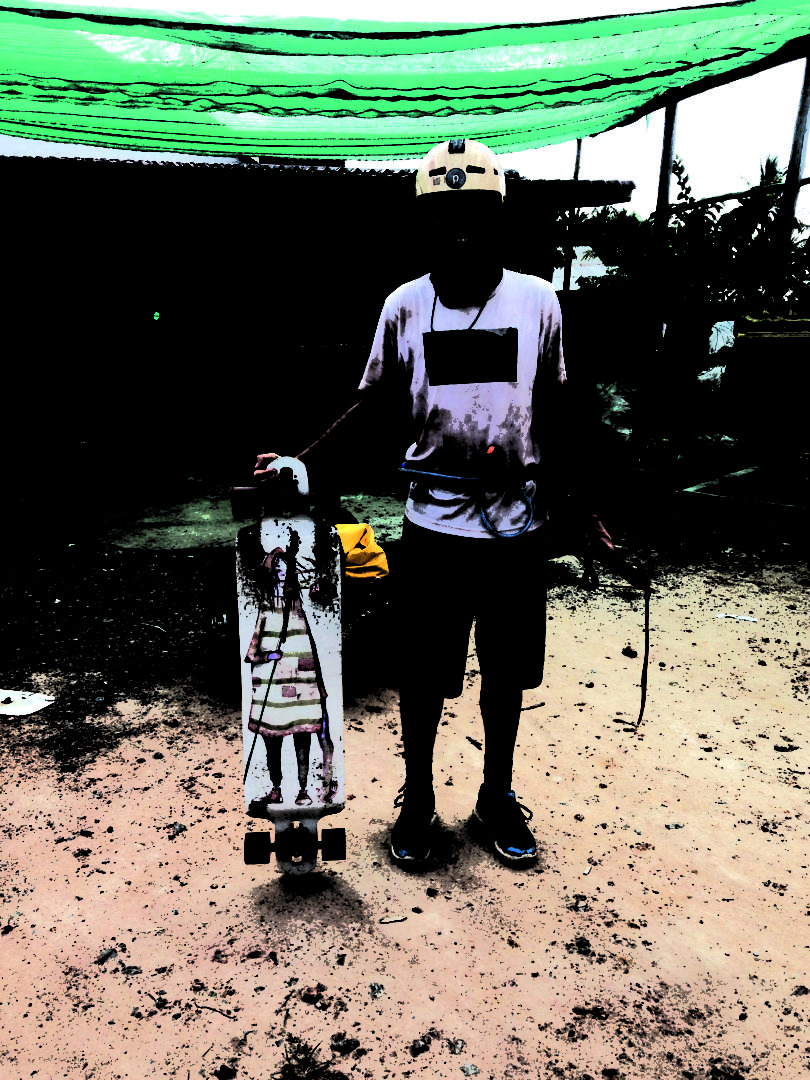 Cambodia greeted me with much worse roads and dust everywhere. Every time a truck passed by, I had to hold my breath for half a minute for the air to clear again. I pushed through rice fields and passed by buffalos, cows, little villages and the first small forests. On my way to Phnom Penh, I stopped at Kohsatharam Pagoda and was invited to sit down with some of the monks. We ended up discussing why we thought Germany was such a powerful country and Cambodia wasn’t. In Cambodia, I also visited some projects of UNICEF and Polarstern, two NGOs that I personally support. What they do in Cambodia is impressive and I wish more people would get engaged in this kind of work.

In the south-western part of Cambodia, I had a crazy couple of days. Pushing a longboard through this remote area in the Cardamom Mountains was definitely an adventure! I was told there were still wild elephants, mountain lions and leopards in the national parks I skated through, and even though I didn’t see any, it made the trip through the jungle much more exciting.

The Kingdom Of Thailand

The first couple of kilometres after crossing the Thai border were pretty hilly, but the roads were fantastic. I have never skated on anything as smooth, and as I pushed along Thailand’s east coast the views over the sea to the left and the jungle mountains to the right were spectacular. But the heat was a nightmare. I drank about six to seven litres every day and still felt like I hadn’t peed in weeks. A couple of days later, I camped on the beach at Leam Sing Forest Park. After setting up my hammock, I enjoyed the sunset and fell asleep to the sound of the wind and the waves. This was what I had been dreaming about. 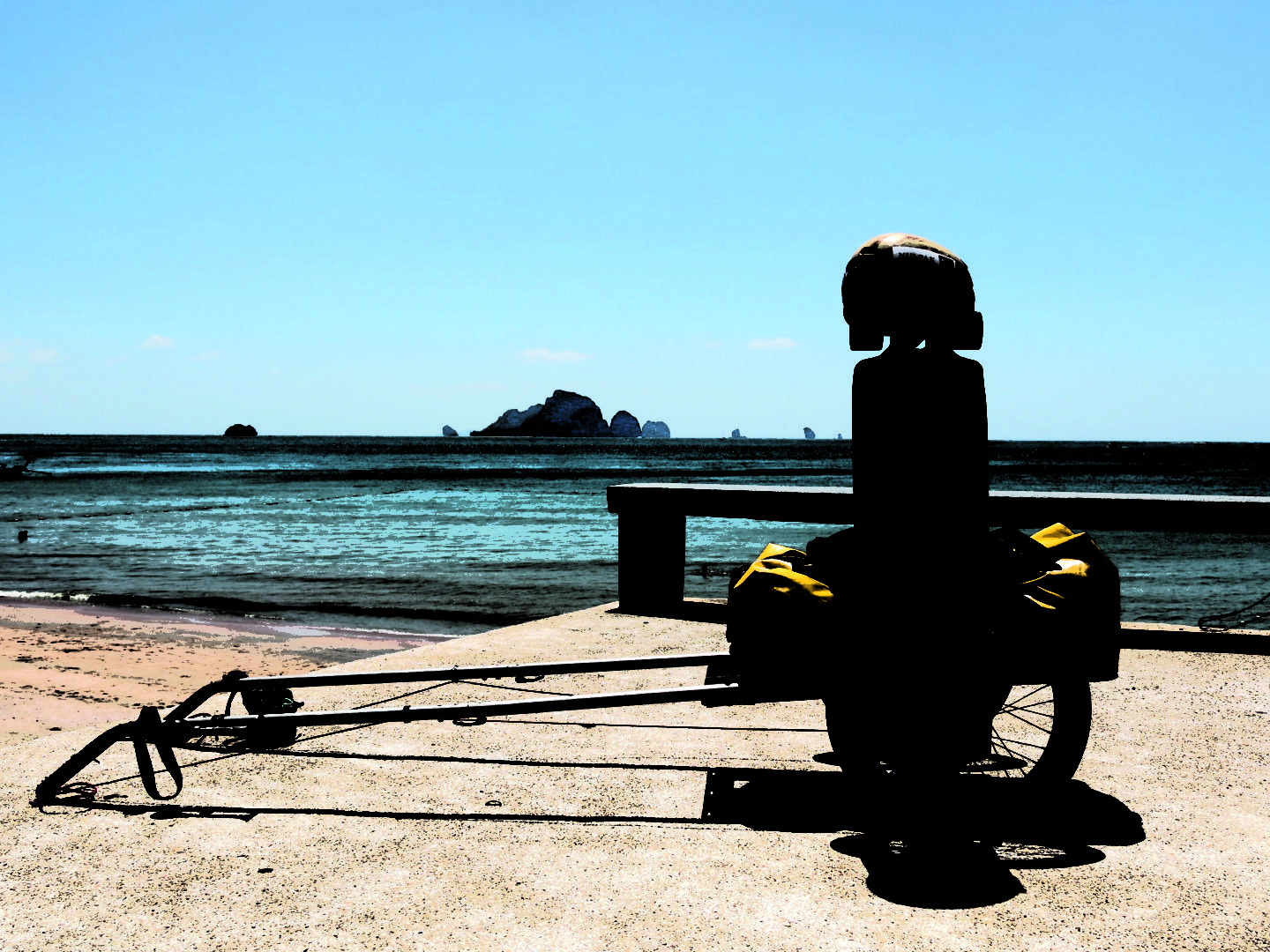 One time a pickup truck pulled over and a reporter for Thailand’s national TV Channel 3 jumped out of the car and wanted to interview me. After I had been on prime time news five nights in a row, everything changed. Many Thai people recognized me, and after taking photos they would stuff my bag with food and drinks. Most foreigners, on the other hand, reacted completely differently. Some simply ignored me, but many stared at me with open mouths before starting to laugh.

In Khao Lak I joined a diving trip, because I was told that the chances of seeing Manta Rays were pretty high. Unfortunately the old joke about Thailand actually proved true: there were more divers than fish in the water. But I forgot it all when I saw the first ray – one of the most beautiful creatures I have ever seen. 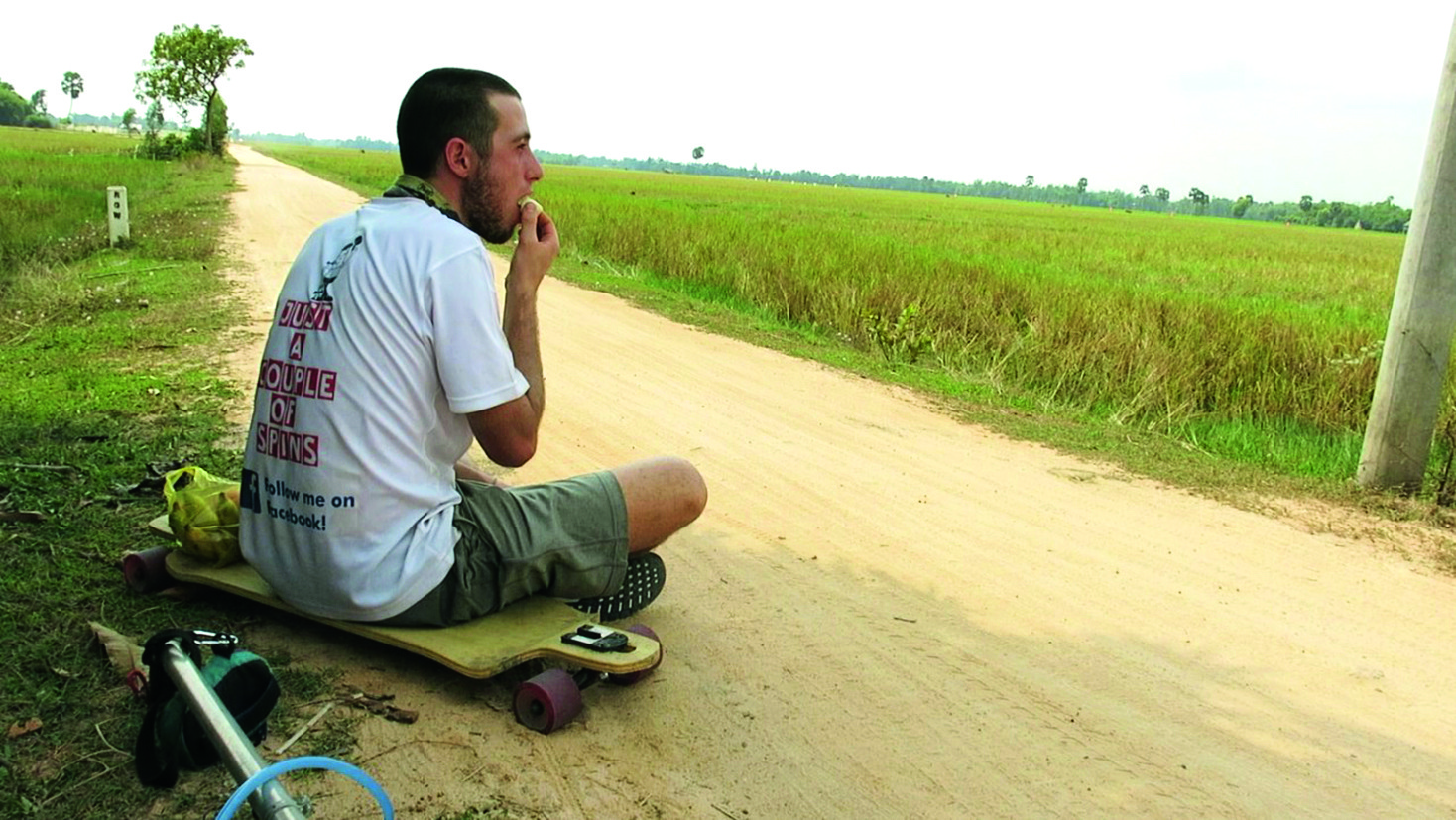 In Malaysia, I skated through some smaller and some bigger cities and was greeted with big smiles and overwhelming friendliness in each one of them. I laughed and smiled at everybody and everything. The people must have thought I was crazy, but I didn’t care. The whole atmosphere in Malaysia was different, maybe because it’s a country where so many cultures are mixed together.

It was incredibly hot as I skated through Malaysia, and when I arrived in Kuala Lumpur it had gotten so bad that my shirt and shorts were soaked through after only a couple of minutes on the board. I started a little game of counting the drops of sweat falling from my face. The record was 35 drops in a minute. 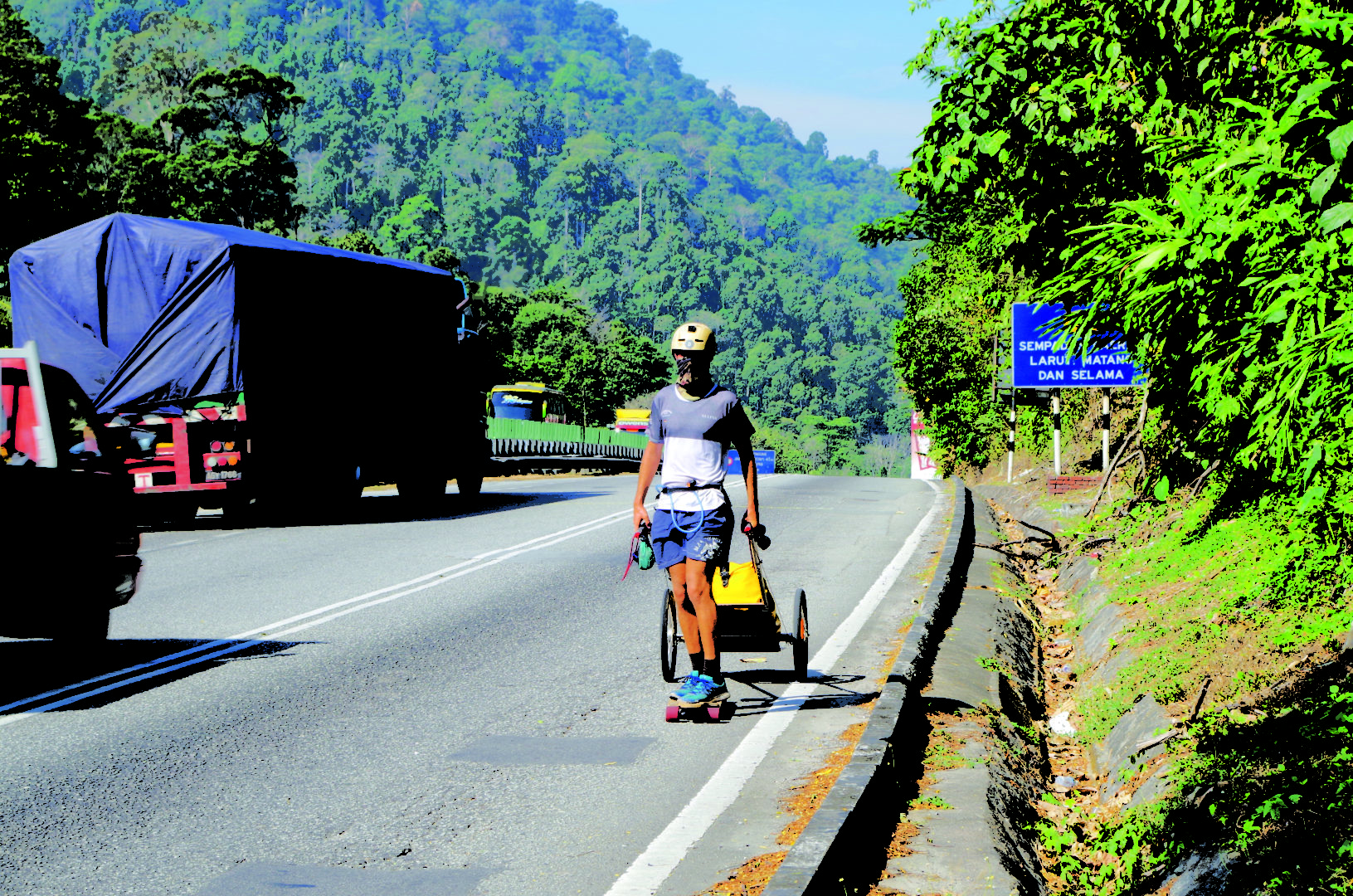 When I arrived in Pontian in southern Malaysia, I realised for the first time that my trip would soon be over. As I stared out at the setting sun, I remembered all the beautiful moments I had experienced along the way, all the beautiful people I had met and the stunning places I’d seen. I remembered the ups and downs, how I had managed to push on through the hard times and how much I had enjoyed the good.

When I woke up the next morning, it was suddenly the last day of my trip. But because I still had a lot of distance to push through, there was no time to get emotional. I reached the border to Singapore and got more and more excited the closer I got to the city centre. And then I had finally made it. I had skated 3,531 kilometres from Saigon to Singapore in 70 days. My legs and feet hurt badly. I stood there and enjoyed the overwhelming feeling of accomplishment for a moment, but was soon brought back to reality. There were hundreds of tourists around taking billions of photos. They looked at me like I was an alien. Sweaty, dirty, sunburnt, smelly and grinning like the dumbest person on the planet, I can totally understand why. 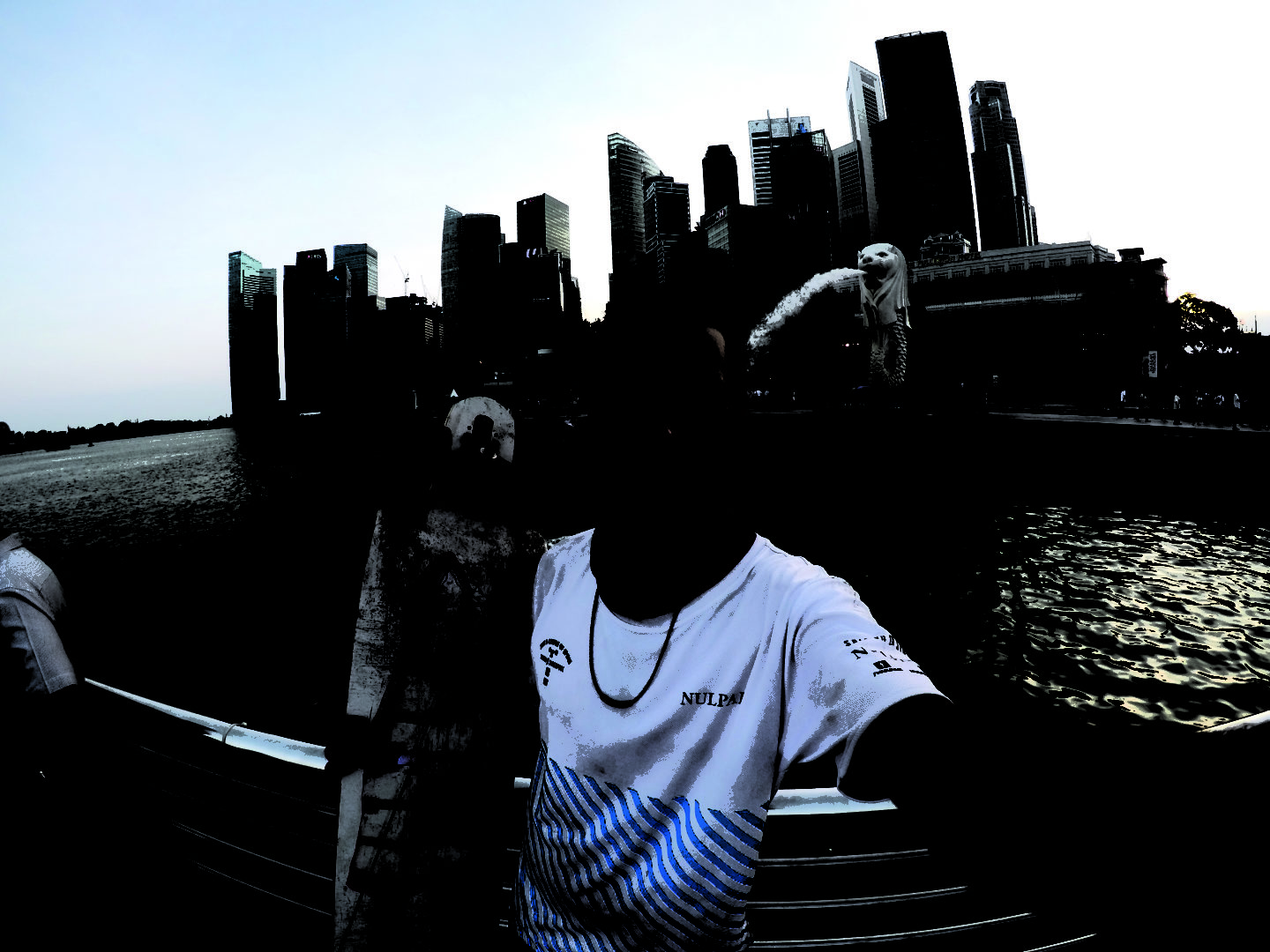