Insights of a life in Ethiopia: Colours of the South

The sign of Addis Ababa vanished into the smog of the capital and our jeep jiggled as our driver Sisay manoeuvred his way through the potholes in the road. Donkeys, goats, and herds of sheep joined together to block the way. Rush hour? Nothing they would be bothered by.

Our journey from the capital of Ethiopia to the south of the country was 600 kilometres long and would pass through lonesome remote areas as well as villages and small cities. It would also lead us to the ‘Southern Nations, Nationalities and People’s Region’, which is home to some of Ethiopia’s many colourful ethnic groups, which conserve their traditions and cultures to the fullest.

Four hours into our journey, the streets started to become more empty. The roads were taken up only by the 4WD jeeps of the tourists and the locals’ cattle. Even the houses began to disappear as we drove alongside the vast fields. Once every kilometre, a few small huts emerged at the edge of the road. Huts resembling anthills made of hay and stones – the homes of the Konso. The Konso people are Ethiopia’s agricultural champions. Wherever I looked, I saw young girls and elderly women carrying huge bales of hay on their backs, or boys and their fathers trying to move their livestock around despite the intense 40 degree heat. It seemed as if nothing could make them stop their work, even for a second.

Our car moved along the curved streets. This time we stopped for children, shaking their butts like little professionals right in the middle of the street. “It’s their traditional dance”, explained Sisay, who is from Addis Ababa. We watched these children of the Dorze ethnic group, who prepared us for our visit even before we reached one of the villages. The land of the Dorze is only half as intensively farmed as that of the Konso. The streets are also less filled with cattle or busy locals. Here, men like to meet for walks, hoping for a tourist car to pass by. We were spotted, and within seconds a Rastafarian man with a wide smile and shiny clothes jumped into our car. Happy and excited, he started chatting away.

The village of the Dorze lies in the heart of southern Ethiopia, close to the city of Arba Minch. “Look, this one here is a traditional house. This is how we live. Please guys, take a photo”, the highly motivated Rastafarian man in his mid-thirties explained. Our guide then jumped in front of the flash, ready to take us out of the traditional house and into daily village life. “My sister is baking bread, we should go and watch.” He marched on quickly as if we only had a couple of seconds to watch the brilliant spectacle taking place. Loud voices could be heard from the other end of the village. “Welcome to the Dorze Bar”, our guide shouted with a grin that was so infectious it was impossible to resist joining him. The ‘Dorze Bar’ was an improvised hut with a bamboo roof, and was also the place where the men of the village would meet in the afternoon to have a chat over a strong and burning sip of the locally made schnapps. The sound of clinking glasses got closer, the cheers of the men louder, and within seconds I found myself downing one of the precious drinks. 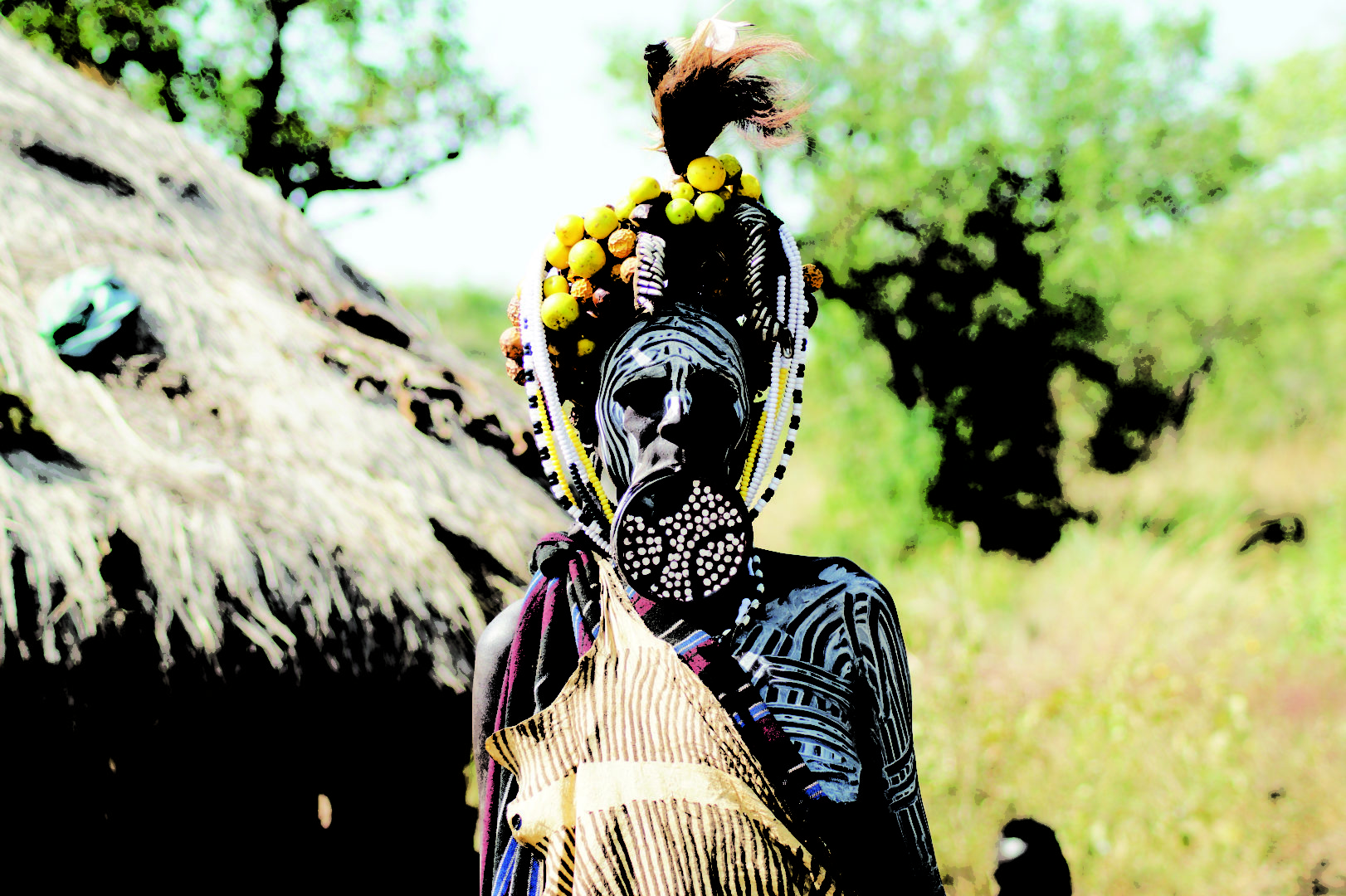 The heat of the Omo valley was getting to us. The hot air flickered over the roads, and Sisay had to concentrate hard as he navigated the large holes in the unpaved streets. He stopped when an armed guard jumped into our car without any explanation. We were getting closer to another ethnic group, the Mursi people, so isolated and special that it takes a rough ride of more than four hours from Arba Minch to reach them. Around 10,000 Mursi people live as nomads in the lower Omo valley, around 800 kilometres from the capital city of Addis Ababa. The Mursi are famous for one thing: the large and colourful plates that the women put in their lower lips at a very young age. Though today they are also known as the tribe that knows best how to make money and that likes to get drunk on local schnapps – hence the armed guard.

We reached the village: a loose assemblage of improvised huts and highly motivated inhabitants who were willing to have their photo taken by every single tourist visiting their home. “Photo, here, photo”, they shouted, trying to get our attention. The fact that they were barely wearing anything except for the plate in their lip, a lose skirt and some very interesting head jewellery was hard to avoid. We started taking photos, only to find out that every click – yes, every click – cost 5 Birr, around 20 Euro cents. Afterwards, we made our way through the village until we found the very first person who was actually wearing a shirt: the village chief. He greeted us with a large smile on his face. In fluent English, he started talking to us, explaining that the money they earned by being ‘models’ for tourists was used “for their own little business”. “Do you guys travel a lot?” he asked, before continuing directly without even waiting for our response. He had been to six countries, and his brother to 20 countries, always promoting Mursi culture in various fairs, events and talks. Sisay then waved from the back: we needed to go.

As we rushed back up north towards the capital, the car passed by villages, people and lazy livestock. A magical trip, which was unbelievably unreal and tangibly true at the same time, was slowly coming to an end. SD cards and minds filled with memories that we could only start to digest once the sign of Addis Ababa came closer, once the big city jungle could be smelled and felt, and once the hustle and bustle of the capital started to reach its peak.