The precursor to Carnival as we know it today was being celebrated 5000 years ago in Mesopotamia, and already in the Middle Ages the high-spirited celebrations that mark the beginning of Lent – including the practice of dressing up – were widespread and popular. Today, Carnival exists in different variations worldwide and generally divides people into two categories. On the one hand, you have the fans: those who love dressing up, who are always on the lookout for an extraordinary costume and who are barely able to stand the anticipation in the build-up to Carnival season. On the other hand, you have the explicit festival despisers: those who just don’t feel like being part of the hoo-ha. The latter generally rely on the support of earplugs, sleeping pills and heavy curtains, but since none of these can really get you through the whole Carnival season unscathed, it might simply be worth following the old adage of “If you can’t beat them, join them!” So pull out your wig, get your mask on, and join the glittering party!

Since Medieval times, in Cologne the evening before the beginning of the Lent fasting period has witnessed some wild excesses. Back in the day, the festivities were limited to three days, but that was still long enough for the town by the Rhine to establish its reputation as the Teutonic Carnival capital. In 1341, the celebrations apparently grew so extravagant and uncontrollable that the city council decided to cease all municipal funding of it. Today, the city authorities once again contribute a considerable amount to the party budget, since Carnival is one of the most economically important events in the city’s yearly calendar.

Cologne’s Carnival season is officially proclaimed at the Alter Markt square on the 11th day of the 11th month at 11:11 am. From this point on, the festive activities steadily escalate until the big week-long party in February, which takes place between the night of Weiberfastnacht and Ash Wednesday. Christmas comes and goes rather quietly, but in January numerous Carnival sessions and balls start to kick off. The Thursday before Ash Wednesday is known as the Weiberfastnacht, when the Carnival of the streets is inaugurated, and there’s no stopping it. From then on, the so-called Jecken carnivalists will be partying on the streets, in the bars and at home – with costumes and drinks in all colours, shapes and sizes. On this night, one Carnival custom particular to Cologne allows women to cut off men’s neckties as a symbol of their male power. 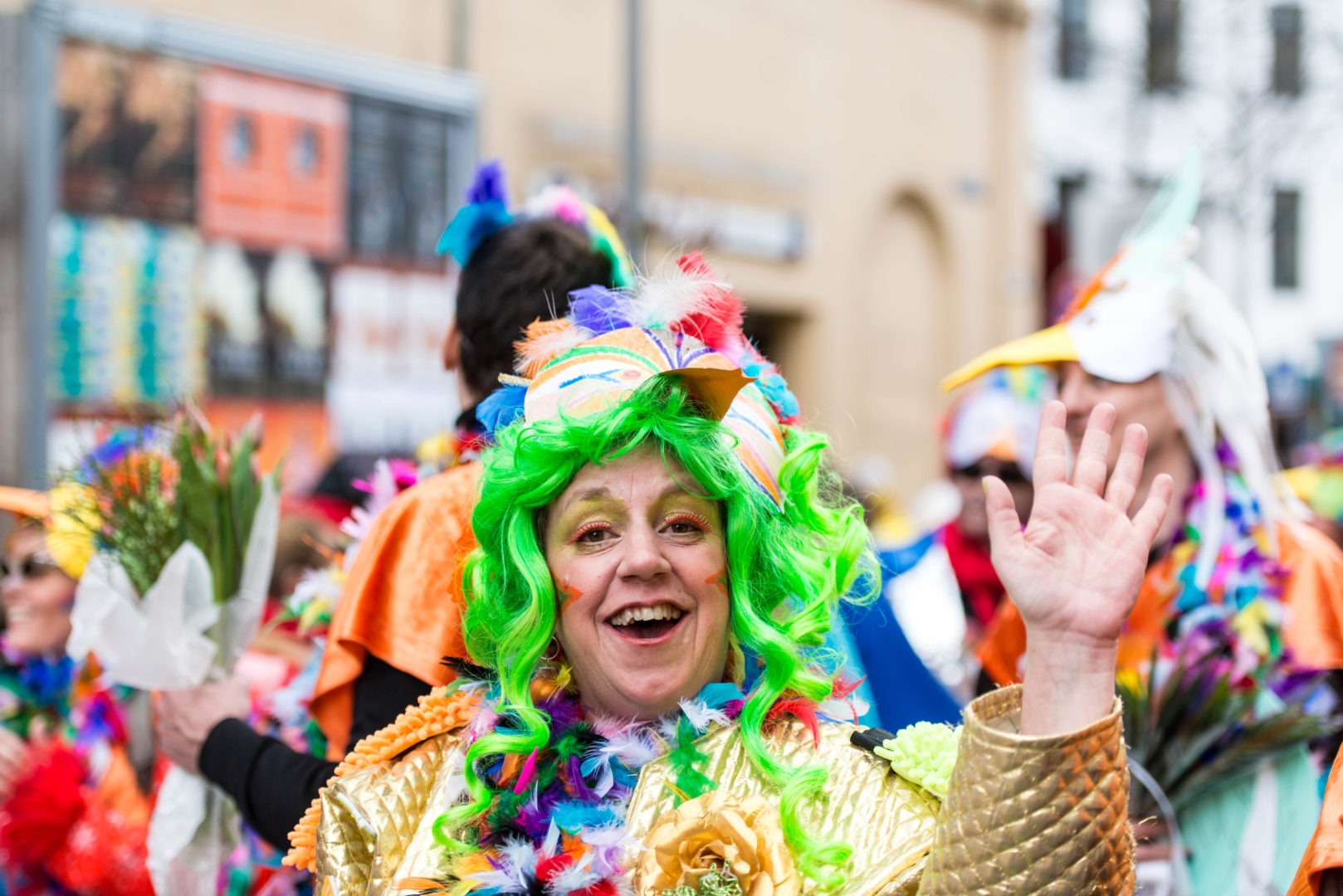 The peak of the Cologne Carnival is the Rosenmontagszug parade, colloquially known as the Zoch. It has been held since 1823 and is the oldest and largest Carnival parade in Germany. With its impressive length of about 8 kilometres from start to finish, the parade attracts hundreds of thousands of spectators every year, who enjoy the spectacle of the costumed groups, marching bands and impressive floats… while trying to catch some of the approximately 300 tons of sweets that are distributed during the parade. The generous dispersal of candy, known as the Kamelle, probably originates from the practice of indulging oneself to the full just before the beginning of Lent. 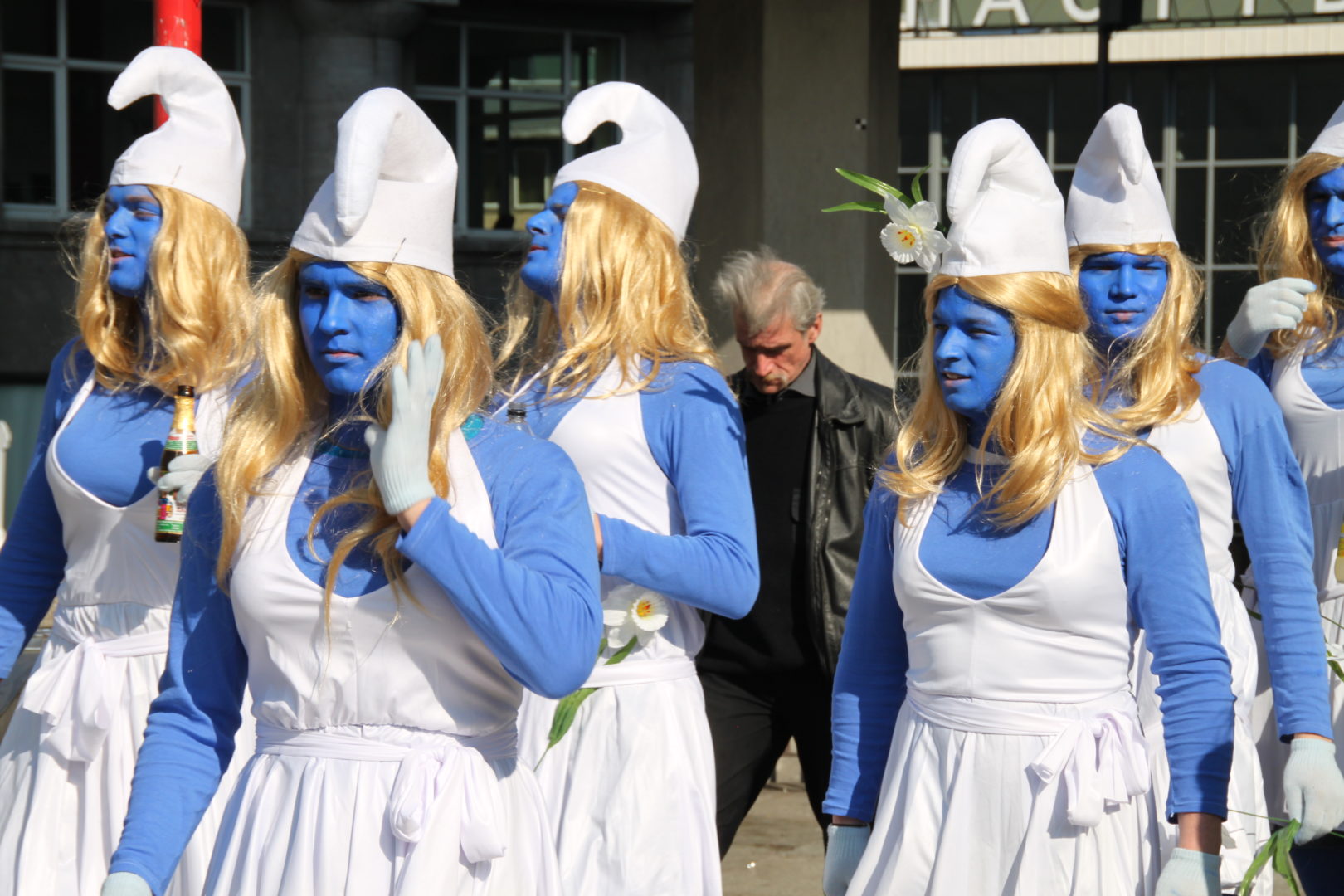 The world-famous carnival in the metropolis at the foot of Sugarloaf Mountain is a party of superlatives: A complimentary frenzy of music, shows and plenty of alcohol. The colourful and exuberant street parties and parades are so full of samba that it is impossible to keep up with the celebrations. The biggest party in the world has its origins in Portugal: the high-spirited Entrodu festivities marking the beginning of Lent made their way to Brazil in the 17th century. The present day Brazilian mega party officially begins on the Friday before Ash Wednesday, and the culmination is the parade of the various samba schools, with their colourfully dressed dancers moving through the specially built sambódromo. Every year, each escola de samba chooses a specific theme that defines the style of the costumes, the rehearsed dance moves and the decorations of the float. And since football is just as popular as Carnival in Brazil, the samba schools are divided into four leagues. At the top is the Grupo Especial, which consists of the twelve schools with the highest ranking. The winner of the parade receives a cash prize, but the honour of being a member of the victorious school is almost more important. Many of the women dancing through the sambódromo prepare hard all year round and save up money for the costume that they’ll wear only for this one occasion of the parade. The processions always begin at 9am, and last for ten hours each day. If this won’t satisfy your party needs, then nothing will. 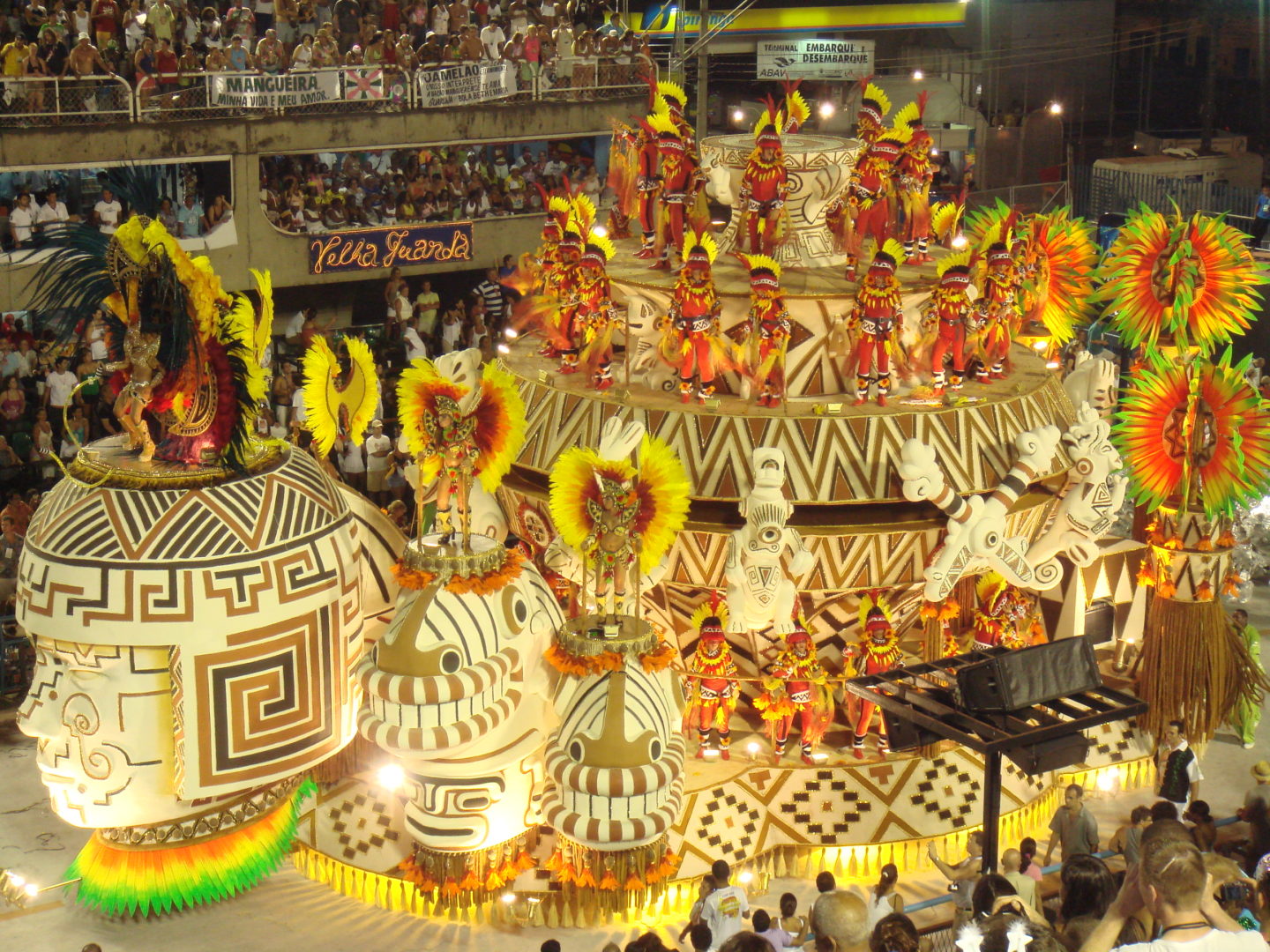 The idea of hiding behind a mask is a time-honoured concept and still a perennial favourite in Hollywood. But while Batman & co. are regularly spotted guests at Carnival parades around the world, Venice remains true to itself, at least regarding costumes. And it’s been like that for a long time, with the origins of the festival dating back to the 12th century. The Venice Carnival stems from the Italian royal courts, and since the late Middle Ages has developed to become increasingly fancy and elaborate. Already a week before the night of Shrovetide, the city by the lagoon transforms into a single vast and magnificent masquerade, its fairytale scenes becoming the backdrop for the glittering dresses and playful Venetian masks. Glamour and splendour are the general fashion, and that has made the historical Carnival of Venice, at least from a visual point of view, the most famous Carnival in the world. Additionally, it’s known for its animal fights, Herculean games and fireworks.

The Carnival of Venice officially begins on the Sunday ten days before Ash Wednesday. The festivities are inaugurated by the Volo dell’Angelo, the so-called “Flight of the Angel”, an event that involves either an acrobat or a particularly brave local descending from the 99 meter high St Mark’s clock tower along a steel wire and landing in the middle of the square below. The beautifully decorated gondolas cruising the canals and the inflatable works of art illuminated at night create a uniquely evocative atmosphere. 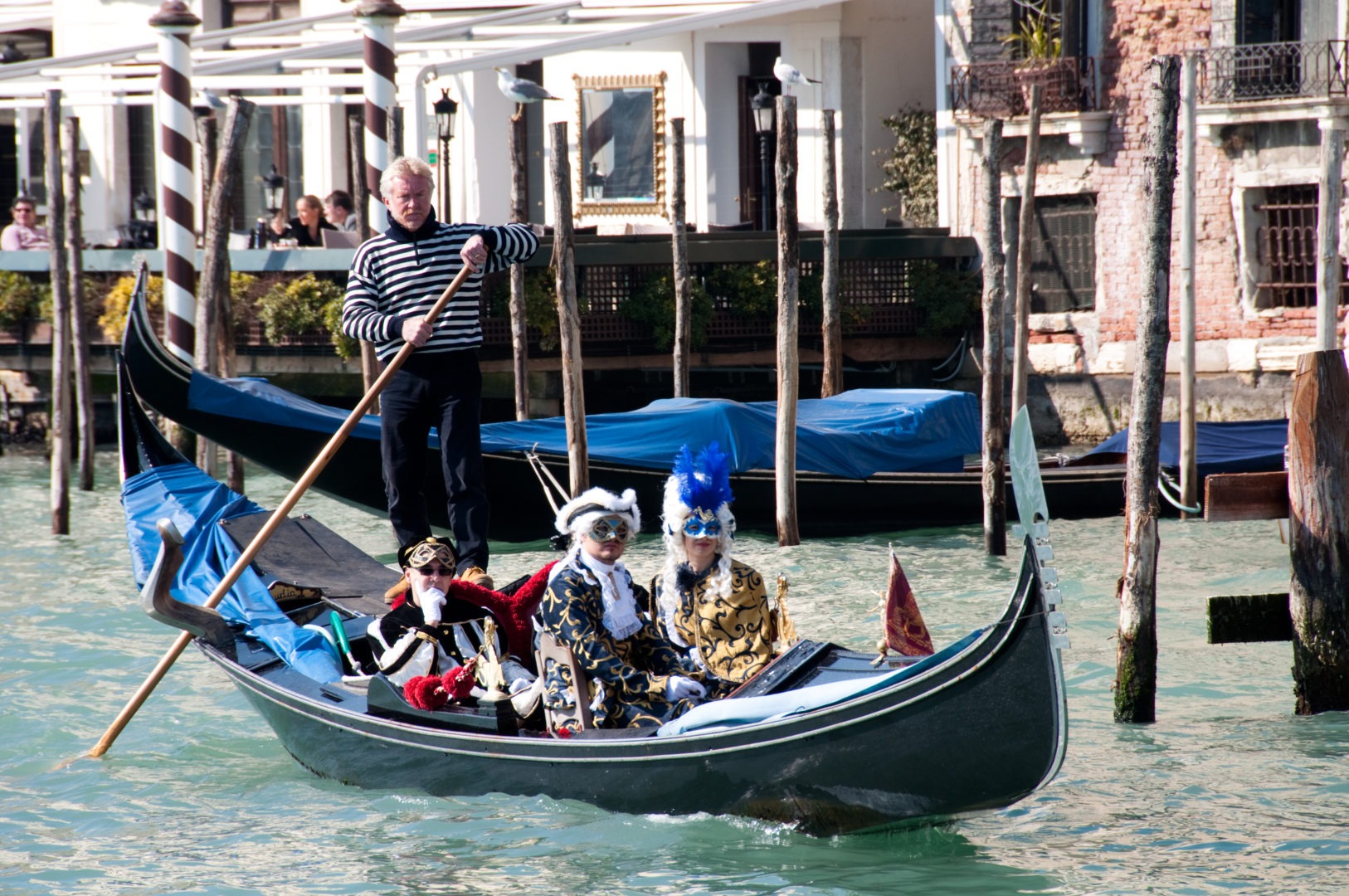