13 Very Best Things To Do In Brussels

Nicknamed the “Capital of Europe”, Brussels has been a top destination for thousands of politicians and members of state for quite a while, but it’s not just the world’s elite who are enjoying the historically-rich city and streets filled with interesting food, fantastic art, and wonderful locals. Brussels today is very different from the trading city it was over a hundred years ago and there’s plenty to keep everyone occupied and enthralled from the moment they arrive into the city.

For solo travellers, there are a number of great attractions to see, restaurants to eat in, and great bars to enjoy a drink in. For couples, there are a number of markets and luxury shops where both treats and souvenirs can be found, cafes that sprawl out onto the pavement from where you can watch the world go by, plus a number of theatres and opera halls – such as the internationally renowned La Monnaie De Munt – in which a culture-filled night of entertainment can be found. Families are also incredibly well catered for, with plenty of choices to fill up both a long weekend or extended summer holiday. Of all the things to do in Brussels, the 13 selected below should not only expose you to the best of Brussels but enthrall you from the moment you arrive.

#1 Absorb yourself in the old Gothic center

If ever there was a historical center that deserved to be on the UNESCO heritage list of buildings of historical importance, it’s the Grand Place of Brussels – and that’s exactly what it is!

This 17th-century former central meeting point of the city is a remarkably preserved example of Gothic-era architecture and for a long time was the meeting point for several guilds whose buildings still line the edge of the square. Together with the City Hall and the Kings Hall opposite, the scene is one of the most iconic postcard pictures you’ll find in Brussels and shouldn’t be missed. It’s a beautiful place to see under a midday sun, but to see it at its most beautiful we recommend visiting just as the sun starts going down. The buildings look beautiful at night, and the square is much quieter too.

#2 Gorge on all of the Belgian chocolate you can find

Of all the exports that Belgium sells, it’s the variety of their chocolates that is unquestionably the most well-known. After more than three centuries of practice, the people of Brussels and the neighboring municipalities have perfected the method of making some of the most intensely rich chocolates and variations of flavors. Throughout the center of Brussels, you’ll barely find a street that doesn’t have at least one chocolatier in which you can enter to watch as they prepare their handmade pralines, truffles, and figurines – but beware, after your first bite, you’ll find it hard not to have a second, third, and fourth! 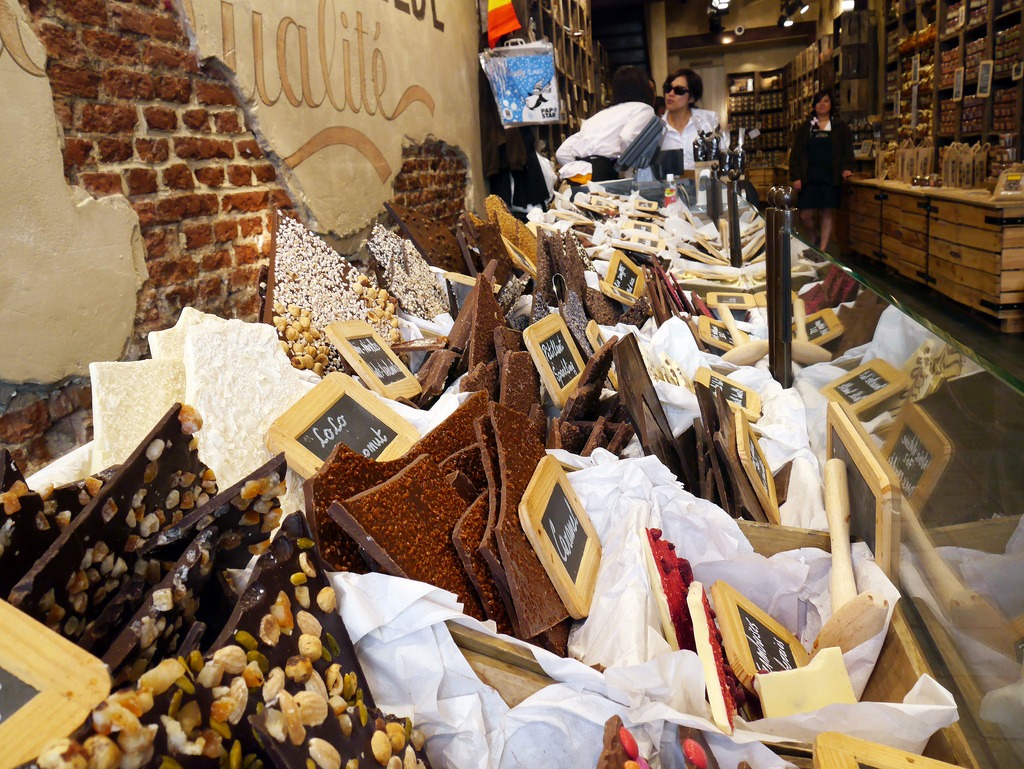 #3 Delve into the surreal artwork at Musee Magritte

Though the surrealist artist was born just over 60 kilometers away in the southern town of Lessines, it’s within Brussels that you’ll now find the home to some of his best work in the museum dedicated to his life. Much of the master’s work is now spread out across the globe, but it’s only here at the Musee Magritte that you can truly delve into the surreal mind of the genius through the expanded story of his life that’s on display. Photographs, videos, and collections from his personal papers and communication give a great glimpse into how friendships throughout his life helped to shape his ideas and visions of what art could become during his lifetime. The entry fee to the museum is €8 and best booked ahead of time via the Official Musee Magritte Ticket Sales website.

Though well known throughout Belgium, it’s only over the past few years that the Jeu de Balle flea market has become an important thing to do in Brussels for tourists, thanks in part to the success of the recent animated production of Hergé’s Adventures of Tintin, directed by Academy Award winner Steven Spielberg.

Whilst considered as a flea market, there’s a surprising array of antiques to be found that are priced far and above the typical penny prices you might be used to seeing elsewhere – however, regardless of age, the market is a picture-perfect place to wander through and explore. Even with just a few extra Euros in your back pocket you can still find a treasure if you keep your expert eyes open. The Jeu de Balle market is right in the heart of the city and opens every day between the hours of 6 AM and 2 PM.

#5 Search the streets on the Comic Book Walking Tour

The effect that Belgian comic books have had on the world is unquestionable, and ever since the books were published and strips appeared in youth magazines the world has paid attention to the unique style in which great characters such as Tintin, The Smurfs, and the Franco-Belgian creation, Asterix are drawn.

To the satisfaction of comic book lovers the world over, the city council began a continuous project to paint a selection of the empty walls in the city centre with murals depicting a broad range of the most well known comic book stars. The resulting walls are today marketed as a comic book walking tour of Brussels that winds around some of the most interesting roads and smaller neighborhoods of the city. With more than 30 walls now painted in Brussels, walking between them to tick them off from the list has become a popular activity for kids, families, and even young-at-heart adults who wish to see and photograph them all.

If ticking them off is top of your agenda then be sure to pick up a free map and mark them all off before you go out for the day. You’ll find a list and map for each one on the City of Brussels website. 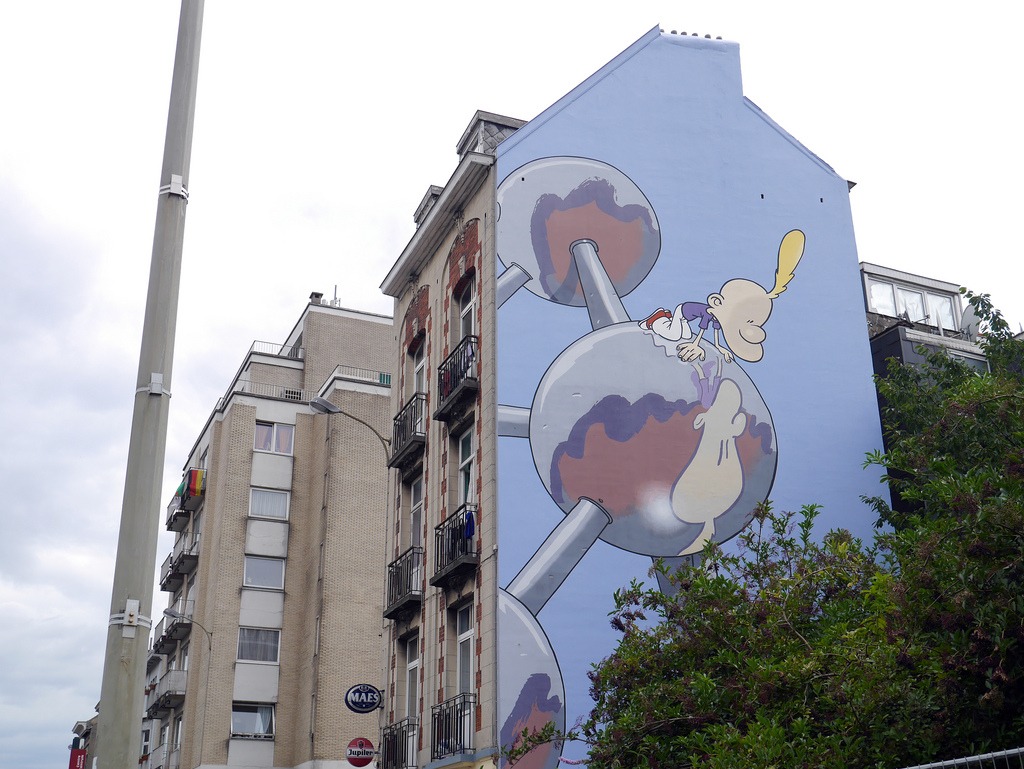 #6 Become experts on Tintin at the Comics Art Museum

When the city council first began putting together the project to paint the streets of Brussels, it was only made possible thanks the dedicated passion of the team at the Belgium Comic Strip Centre, which also goes by the name of the Comics Art Museum of Belgium.

The work put together by the team at the CAM to constant document and create exhibitions dedicated to the original Belgian comic artists of the 1920’s, as well as the modern greats it’s fantastic to see. Visitors to the museum can explore the museum and learn more about the history of artists like Hergé and the invention of the comic book, as well as join one of the guided tours (though these are best organised by email two weeks in advance to avoid disappointment). Entrance for adults is priced at €10, people between the ages of 12 and 25 enter for €6.50, and children under 12 have a reduced price of only €3.50. 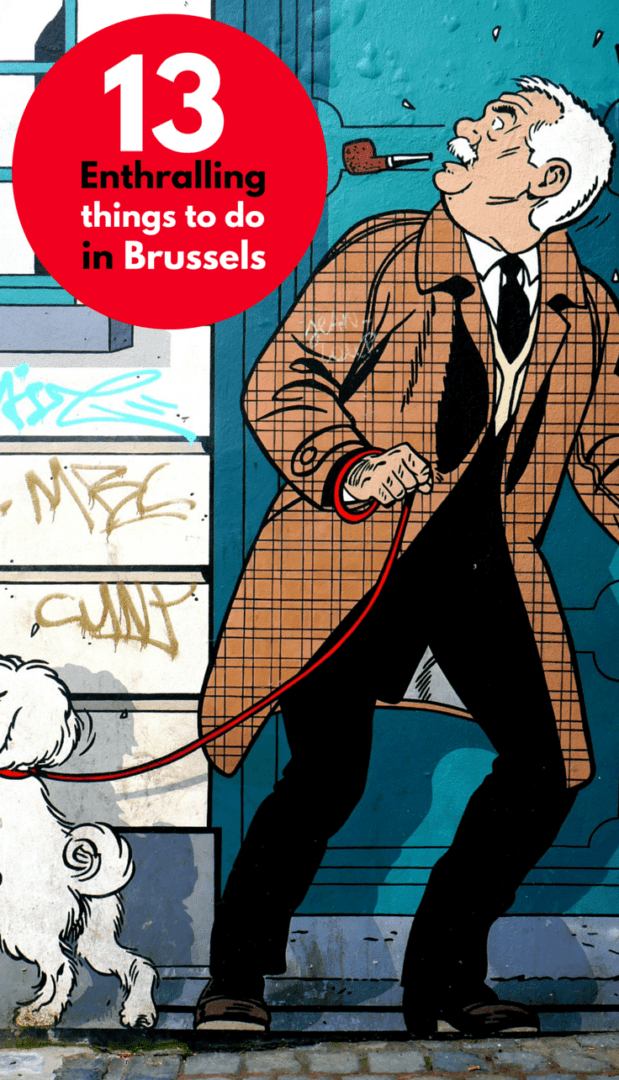 #7 Get your postcard picture at the Atomium

Possibly Brussel’s most recognizable landmark, the spheres and structure of the Atomium have been drawing crowds since the piece was completed in 1958 for the World Fair, and it still continues to draw thousands every day. The Atomium is more than just a standing monument, it’s also a museum, restaurant, and panoramic platform of the surrounding gardens and city. If there’s one place to capture your postcard shot or future profile picture from your holiday in Brussels, it’s this one. 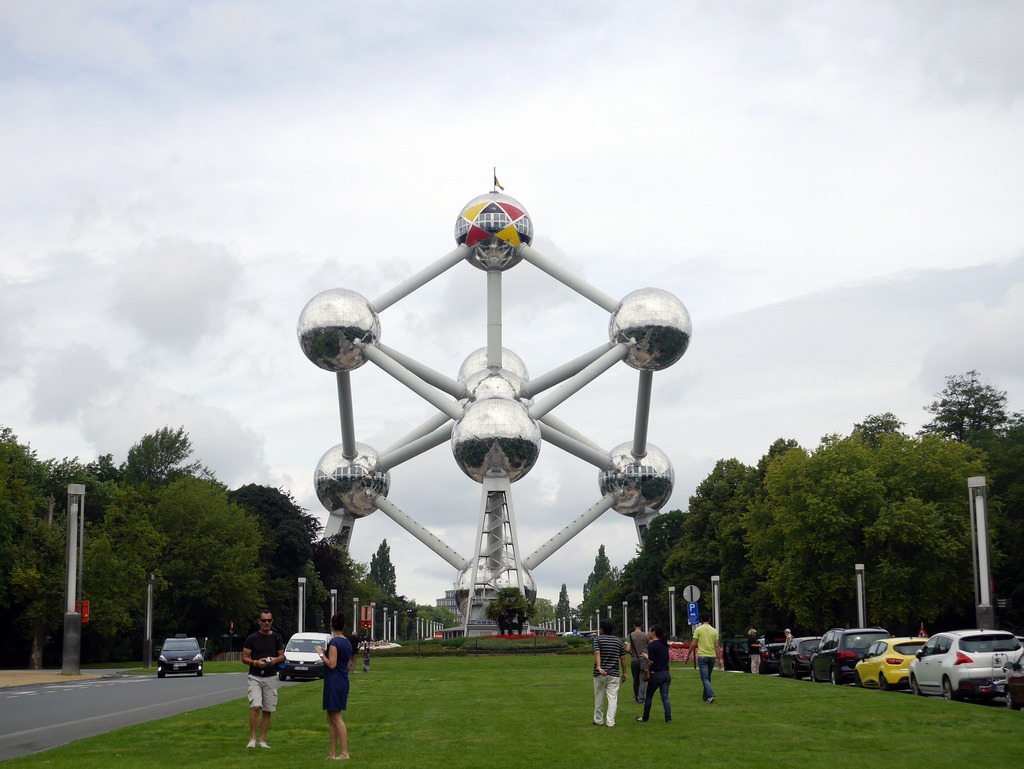 #8 Be a smart traveller with a discount-filled Brussels Card

Making a saving during your holiday is always a smart move as you’ll have more money to have more fun during your trip, and amongst the wisest choices you can make is picking up a Brussels Card. Set at durations of 24, 48, and 72-hour lengths, the card not only carries a number of discounts to attractions, tours, restaurants, and bars in the city; it also offers free access to 30 of Brussels’ best museums – including the René Magritte Museum.

Getting around Brussels is also made easier with the purchase of a Brussels Card + Sightseeing card which includes free use for 24 or 48 hours of the Hop-On-Hop-Off bus (depending on the card purchased).

#9 Engross yourself in the best bookshop in Brussels

Tropismes Bookshop has been described as one of the nicest in Europe, and once amongst the bookshelves, it’s not hard to understand why. Within the famous roofed gallery of the Les Galeries Royales Saint-Hubert, the bookshop is highly popular with locals as a place in which to let the hours go by whilst browsing through the latest publications.
Most of the catalog is in Dutch, French, and German, and there’s a small selection of English-language books to glance over too, but it’s the place itself which you’ll be most engrossed with.

#10 Challenge your wits at the Escape Rooms

“Escape the room” games have taken Europe by storm over the past five years as a place in which a number of people can spend a few hours testing the power of their mind as they try to break cryptic puzzles in order to “escape” the theatrical room in which they are in. The most popular place to test your wits against your friends and family is the Escape Hunt Experience on Livornostraat which remains open late until 10 PM, meaning that after a full day of sightseeing you can end it by coming out top amongst your friends or family as the smartest of all!

#11 See the best panorama of Brussels – for free!

Cinquantenaire Park is one of the largest green open spaces in Brussels and everyday people take to the paths and open grass areas to stroll, run, or relax in the sun during an extended lunch break. The park is also home to a number of interesting historical buildings that were commissioned for a National Exhibition that took place during the latter years of the 19th century. Most interesting of all is the large Arc du Cinquantenaire which occupies the largest part of the park. The arch is reminiscent of several triumphal arches across Europe that were built in admiration of the classic Roman tradition, although this is one of only a small number of arches that feature as the centrepiece to a larger building complex. Most interesting of all is the panorama that can be seen from the top of the arch. Accessed for free via a connecting corridor within the adjoined Royal Museum of the Armed Forces, the view is frequently listed amongst one of the best in Brussels. 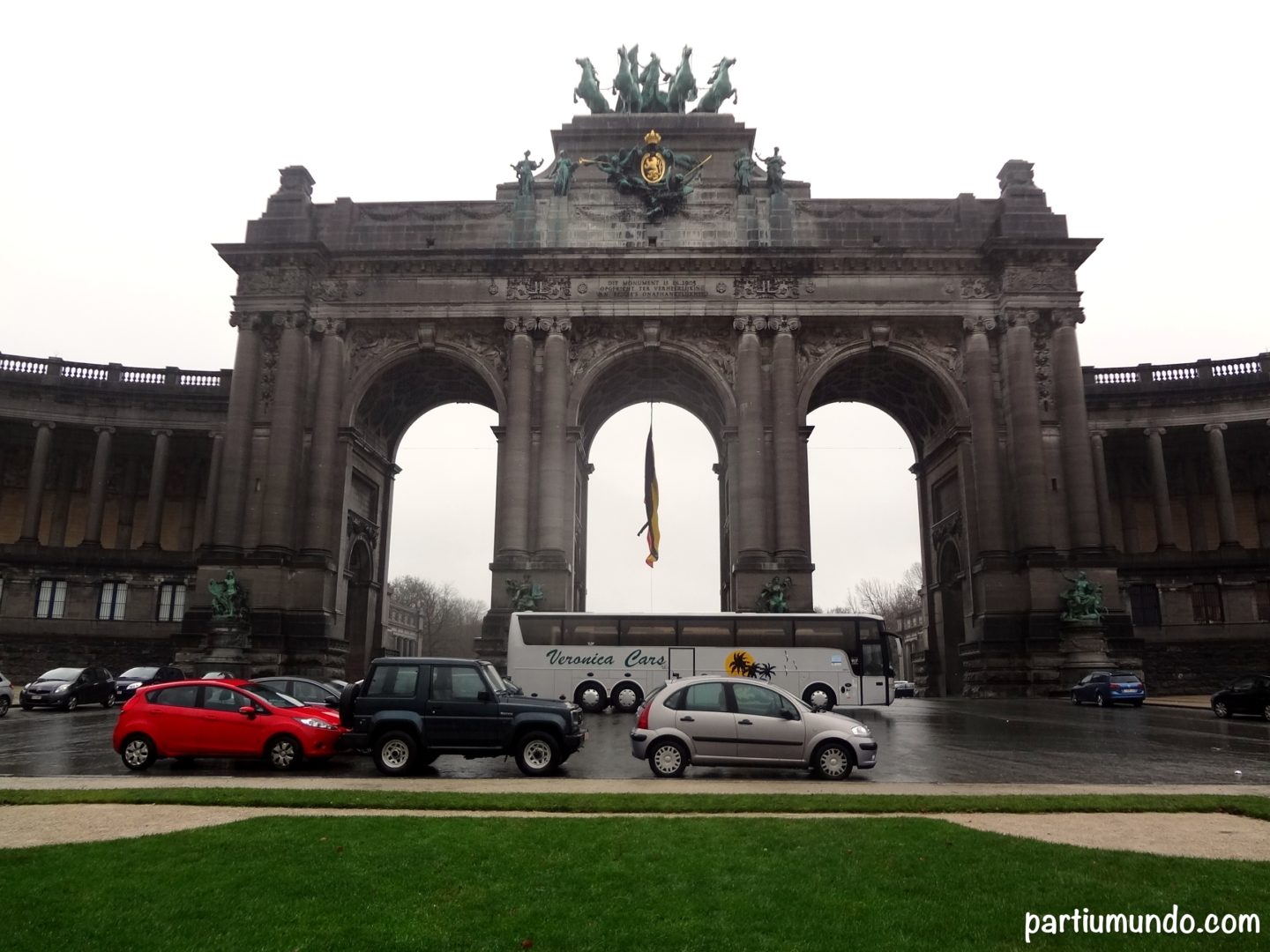 Though the claim to the origin of fries remains up for regular debate between France and Belgium, it’s the latter in which they’re more widespread and recognized as the national snack of the country. Thin, crispy, and golden in color; ordering a plate or cone of fries topped with mayonnaise or tomato ketchup as a snack is highly common for Belgians and it’s something you’ll likely see more than a dozen times a day whilst walking around Brussels. Leaving Brussels without ordering a plate filled with these hot potato treats could be seen as a crime, so be sure to share a plate with a friend or two during your stay.

Stay at an affordable art-centric hotel