Not only is Berlin nine times bigger than Paris it’s also home to more vegan and vegan-friendly bars and restaurants than most of the larger capitals of Central and Western Europe – and as more vegans take to the skies to explore Berlin and the unique cultural makeup of the city, finding the best vegan bars and restaurants is a top priority.

After booking your affordable stay at one of the MEININGER Hotels in Berlin take a moment to wet your appetite and plan where to eat yourself with animal-friendly vegan treats and drinks at one of these 10 Best Vegan Bars & Restaurants in Berlin.

Opened in 2014, Laauma has quickly become one of the highlights of the vegan cafe scene in Berlin and for good reason.

Created by Peter Aurisch & Jessica Mach – the artist couple behind the internationally popular tattoo studio Nevada Johnny – to highlight the much-loved and appreciated culinary talents of Peter, who’s vegan food offerings match the beauty and artistic grace of his tattoos.
Laauma doesn’t aim to be a part of the growing artisan coffee shop and cafe scene in Berlin, instead they’re aiming to create a digital and WiFi-free environment where people visit to enjoy not only the fantastic cruelty-free vegan and raw vegan food, but also the relaxing interior surroundings created and designed by the artistic hands of the couple themselves using a combination of recycled materials to create both the furniture and the art that decorates each wall.

Their sweets are amongst some of the best to choose from in Berlin, but don’t miss out on a plate of their Naughty Nuggets – a vegan take on chicken nuggets, but without any of the cruelty, but a far better taste. 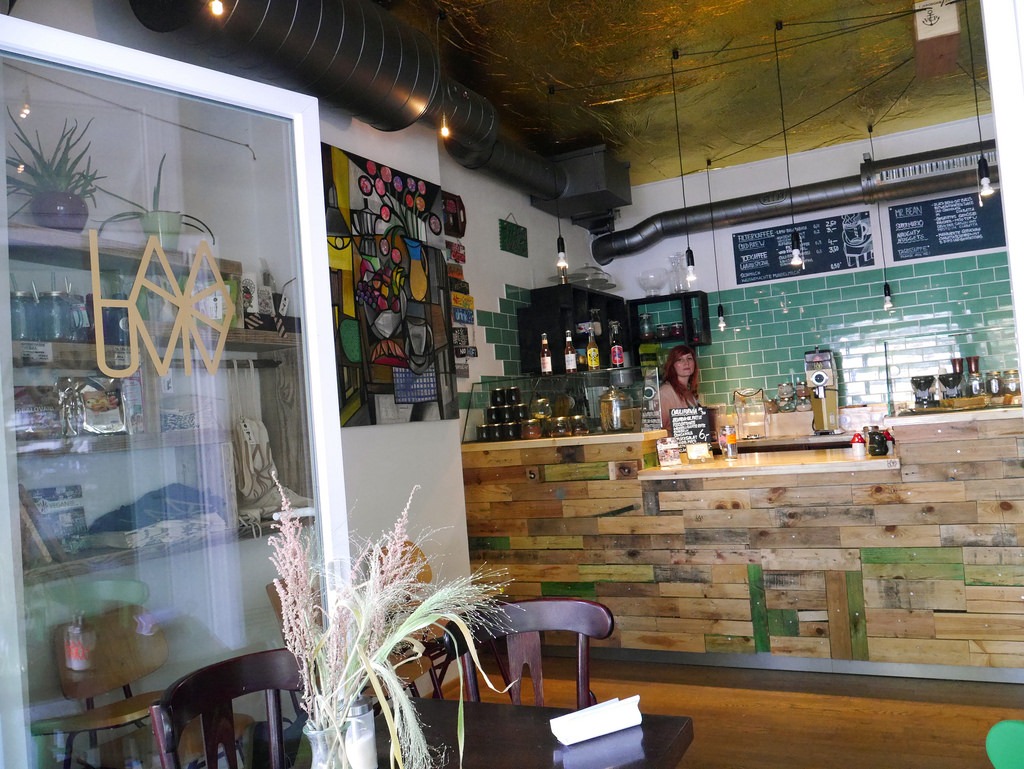 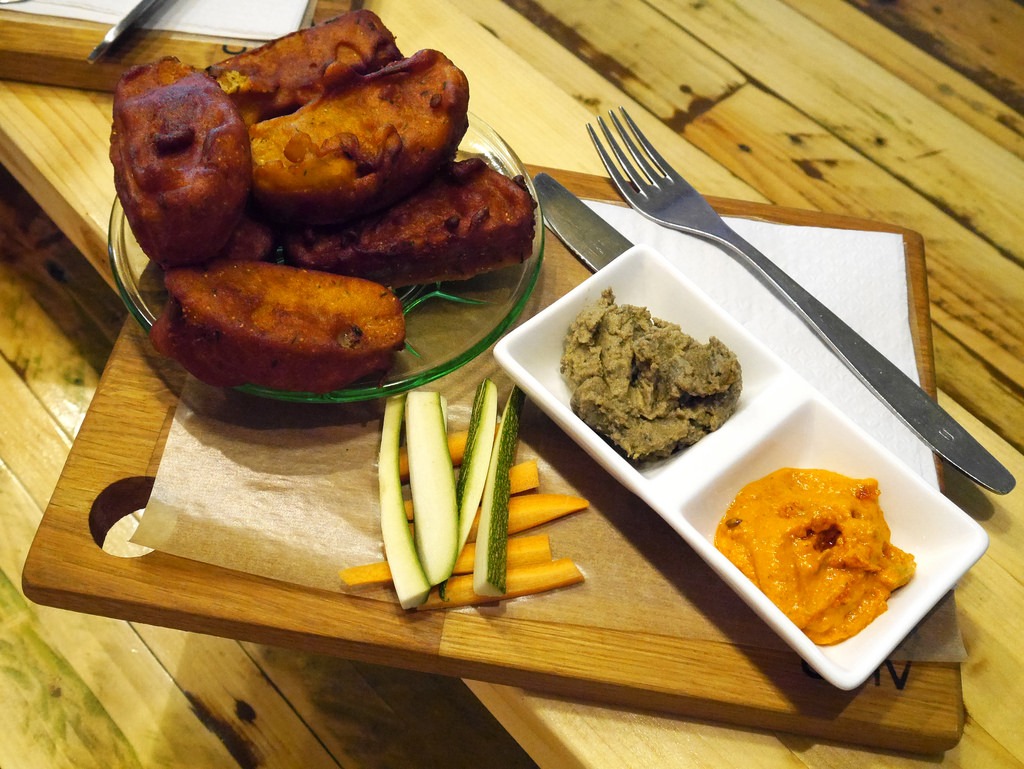 The small team at Chaostheorie pride themselves on not only being the first 100% vegan bar in Berlin, but also on how highly valued and loved they are amongst both the local populous, but also by international visitors who often make it their first stop during their vacations in Berlin.
Though Chaostheorie carry a nice selection of vegan and veganized snacks, small meals, and desserts, the biggest draw for most is their available through the day selection of cocktails and sweet drinks that tickle all of the senses.

Their drinks menu is a collection of the traditional and unique – both with alcohol and without – leaving with you with plenty of choice. Most loved amongst the late night visitors to Chaostheorie are the mixed cocktails, with the Chaos Spritzer one of the best amongst them, but if a strong drink isn’t your flavour then one of their coconut milk-based pineapple & banana smoothies will definitely quench your thirst.

Open until midnight from Monday to Sunday, at less than a 15 minutes walk from MEININGER Hotels Berlin Alexanderplatz it comes as no surprise to see why so many travellers to Berlin are picking it as one of their all-time favourite vegan bars.

The boutique shopping scene in Berlin is enticing more people than ever to explore the shopaholics paradise it has becoming in recent years thanks to the surge in week long pop-up design shops that seem to disappear just as soon as they’ve arrived – but when all of the shopping is done and you’re feeling the need to drop all of your bags of freshly claimed fashionable goods and pamper yourself with some vegan treats your needs are now easily taken care of in Berlin.

Ohlala in Friedrichshain is Berlin’s answer to the French boutique cafe and within its pink painted walls you’ll find some of the best vegan sweets in the city. It looks and feels much like the boutique shops spread across the city and sitting amongst other resting shoppers with an almond milk latte.

Though open throughout the week offering meals and their notoriously sweet raw vegan, gluten-free, and vegan desserts; the highlight for most regular visitors to Ohlala is their weekend brunches between 10am and 3pm where you can fill up your plate with anything from their buffet table spread of savouries and pastries. 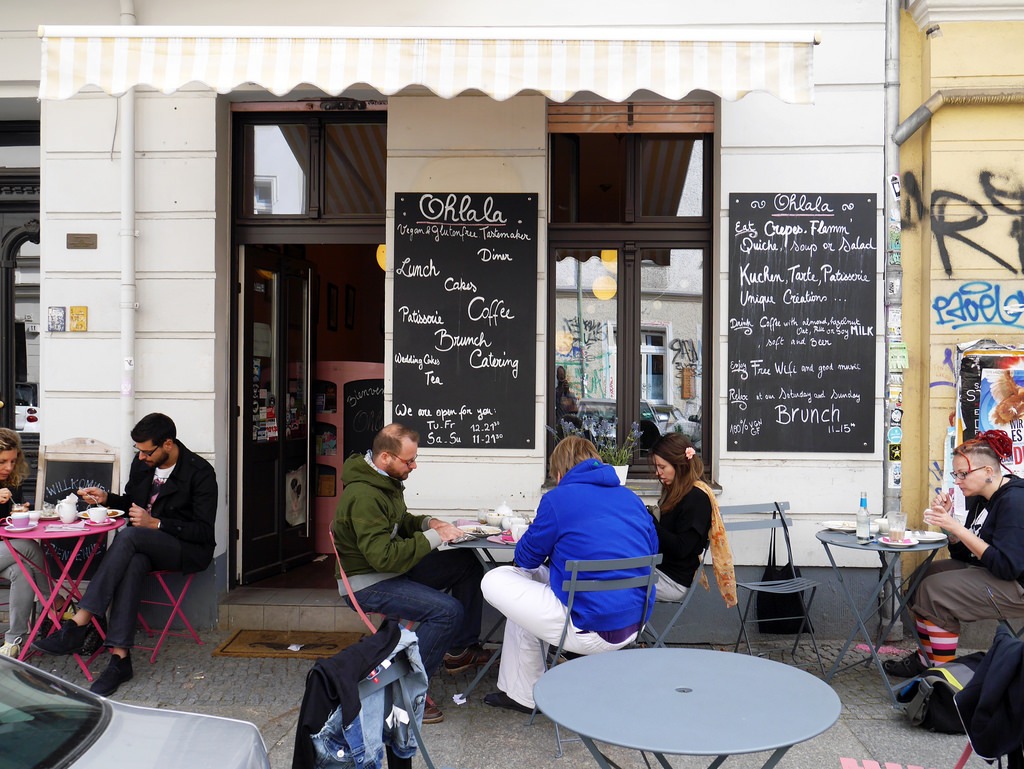 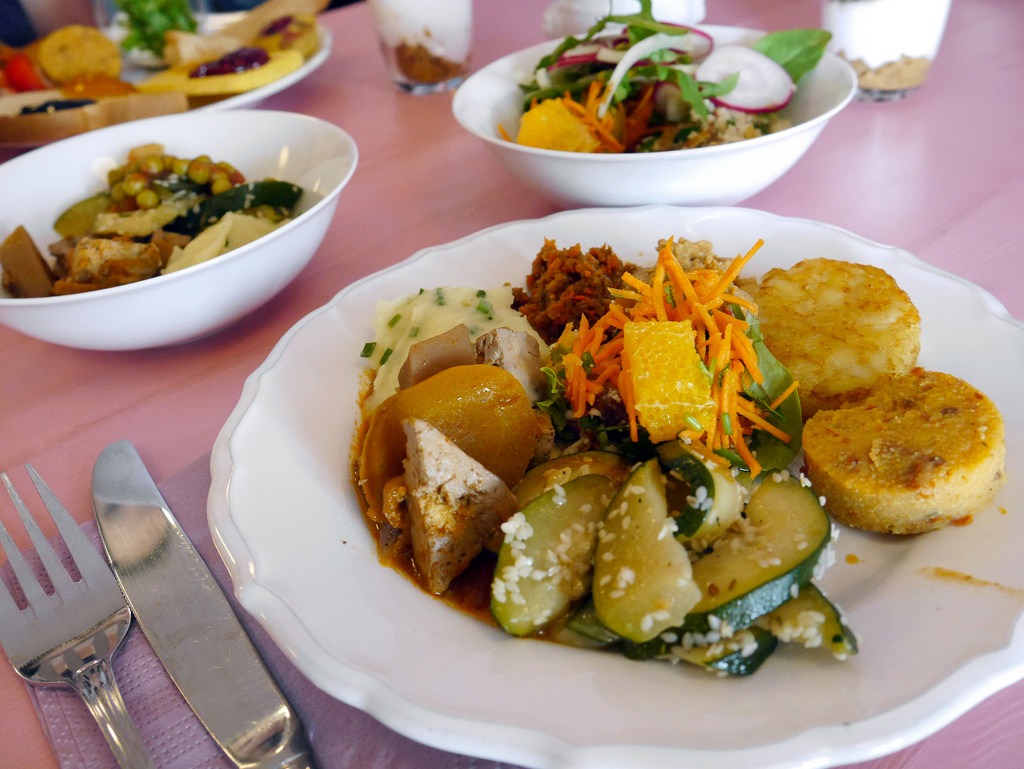 Another of Berlin’s best vegan bars is Viasko, located in the fashionable-amongst-hipsters district of Kreuzberg-Alt Treptow.

Though over the past few years this former Irish Bar has moved towards being more of a restaurant than a bar, it’s still a frequently visited place for groups of people who wish to enjoy a drink, but now with a side of great vegan food too.

Whilst famous for another great weekend buffet like the one at Ohlala, the regularly changed 100% vegan menu never fails to provide a delicious bite to eat thanks to their aim to provide not only traditional vegan staples that you can find internationally, but also veganised and ‘accidentally vegan’ options from traditional German cuisine.

If you only visit one 100% vegan place during your stay in Berlin, Voner must be it. Whilst Berlin may now be a famous home for the doner kebab and the spicy meat that it contains, vegans haven’t been always been able to join in on the excitement that surrounds them for first-time visitors to Berlin – until now.

Voner’s ‘Meat Free’ doner kebab is now the thing of legends and using a mixture of seitan and other secret ingredients is as close to the same taste as our omnivore neighbours are enjoying – and some say that it’s even better than the original.

This fast-food snack bar may only have seats for a maximum of 16 at a time, waiting your turn to enjoy your own cruelty and meat-free doner kebab is worth every moment waited – and if waiting just a couple of minutes doesn’t quite fit your tight agenda of touring around the district of Friedrichshain, you can always take one of their delicious vegan doner wraps to go. 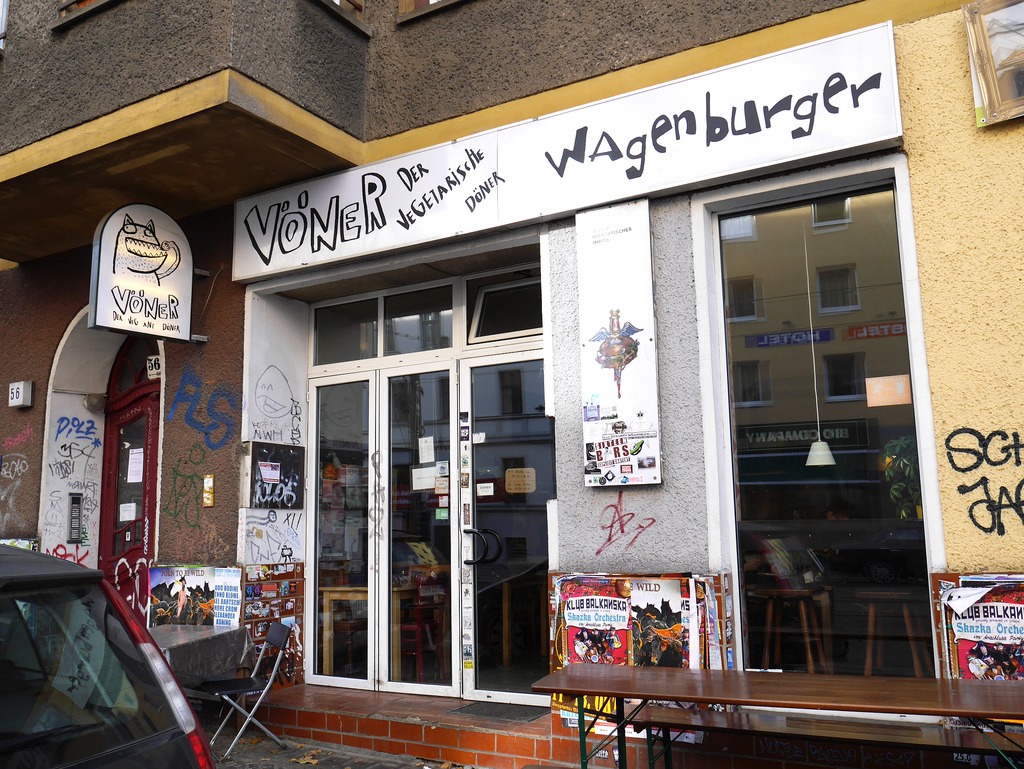 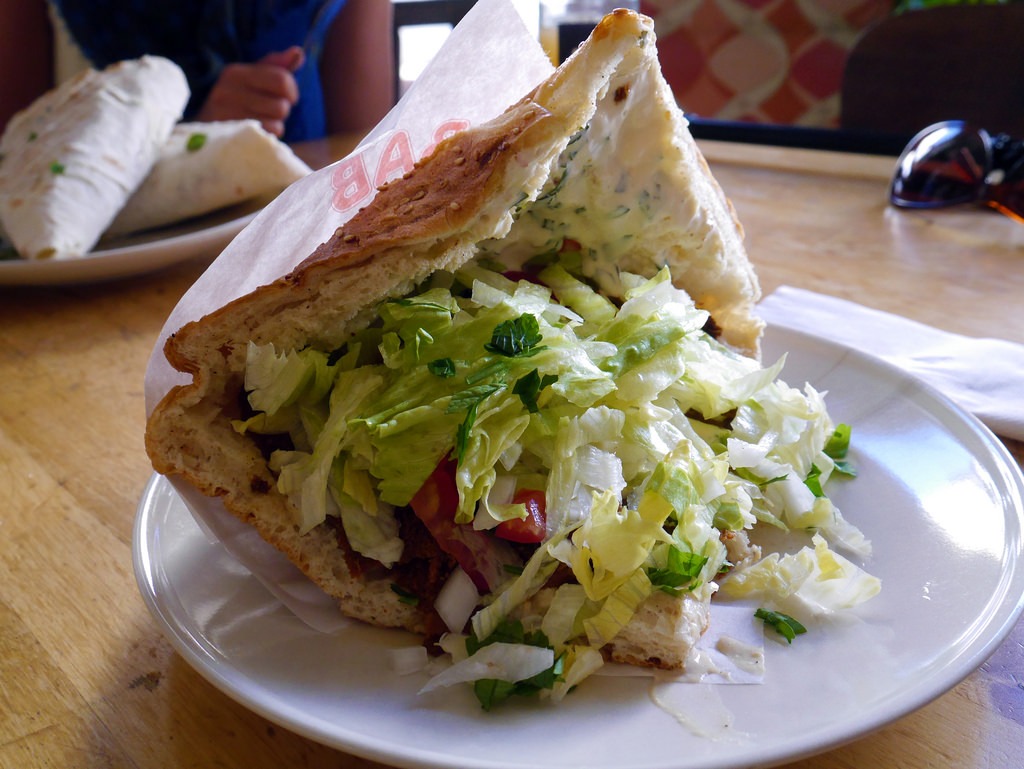 After you’ve booked your stay at one of the MEININGER Hotels in Berlin you’re next booking should be for a table at Kopps.

Located in the district of Mitte and run by Bjoern Moschinski – Germany’s most well known vegan chef – this high end vegan restaurant never fails to disappoint any of its clients who arrive in the knowledge they’re in for a one of the closest-to fine dining experiences for vegan food in Europe.

Though their week long menu is worth the visit alone due to their focus on traditional German foods, one of the most common reasons people have been regularly enjoying the tasteful delights at Kopps is due to its weekend buffet between 10 am and 4 pm. Perfect for travellers on a budget, at €12.50 per person you can enjoy some of their best options from their large selection of vegan cheeses and meats, salads, vegetables, and veganised German classics.

Sfizy Veg is fast become one of the top highlights of the vegan scene in Berlin and quite rightly deserves its inclusion in this list of the best 10 vegan bars and restaurants.

Operated by Northern Italians, the pizza base alone is one of the best reasons to visit Sfizy Veg. With the same thinness and crunch that you typically only find within the boundaries of Naples and Italy as a whole; it’s worth choosing this pizzeria over so many which typically opt for the more American deep pan and thick crust. That the pizza menu is entirely vegan only adds to how fantastic and delicious their pizzas are.

Using a combination of traditional flavours, imported original Italian products, and the inclusion of some of the best known vegan cheese brands; no matter which of their multiple topping choices your pick you’ll find yourself reaching for slice, after slice, after slice. 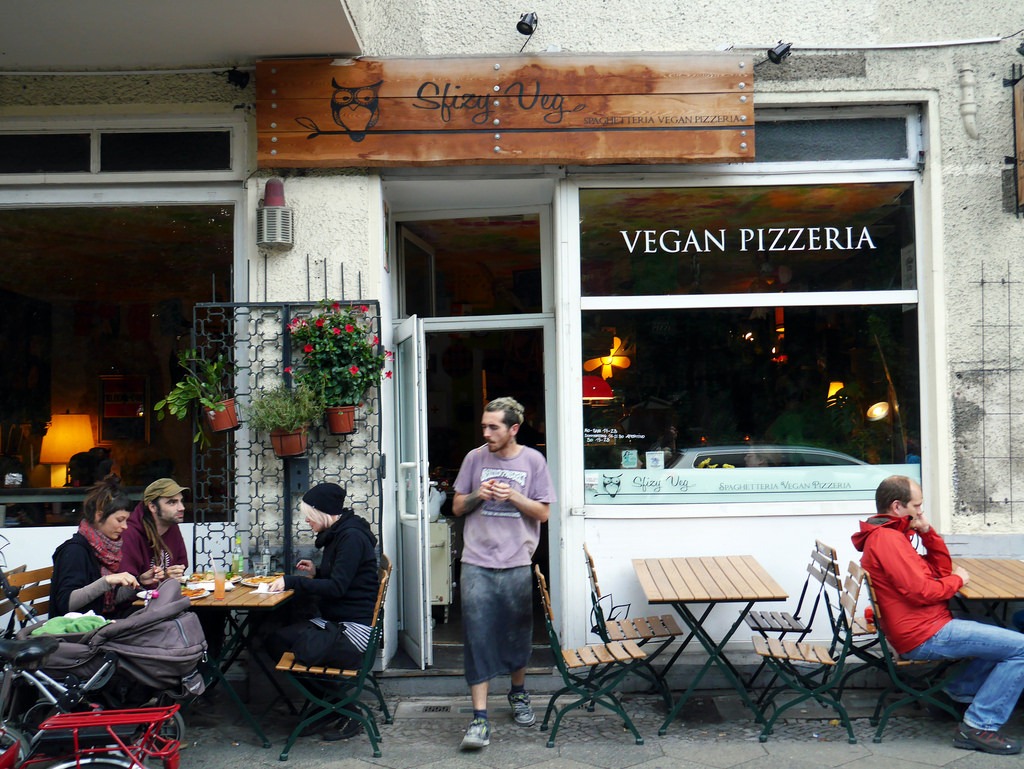 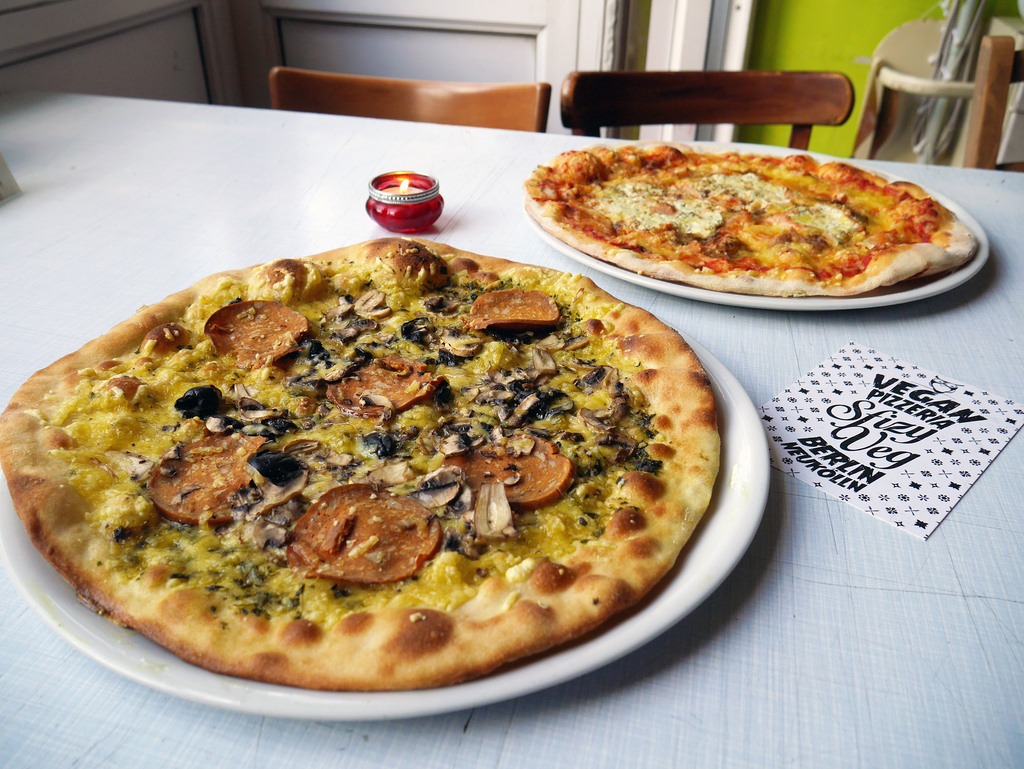 Sitting outside one of Berlin’s best open green oases at the Eberswalder Strasse exit of Mauerpark is Fast Rabbit; one of the most relaxed vegan takeaways in the city. Focused on ‘indoor street food’, the menu is centred for the most part on the fast and fabulous taste of a well made wrap. Though over the past year Fast Rabbit has moved to expand its menu and provide a delicious and diverse vegan menu for its growing catering business, there’s still a lot of love for small selection of three wrap fillings with a taste unlike most Mexican wraps elsewhere in Berlin.
Next to the two other Oriental and traditional Mexican wrap flavours on the menu, the ‘German Wrap‘ as a unique must-try blend of which has picked vegetables amongst its ingredients.

If travelling as a mixed omnivore and vegan family or group it can sometimes be difficult to find a restaurant to eat in where everyone’s choices are catered for. Thankfully, at Santa Maria in Kreuzberg those troubles are easily taken care of.

Focusing solely on the Mexican classics and street food, Santa Maria has a couple of vegan options amongst its typical meat fare that are both tasty and quite filling. Chief amongst those are the vegetable tacos and nopal (young cactus leaf) quesadillas.

As the night arrives so does the option as Santa Maria as a vegan-friendly bar, with a number of choices for vegan drinkers. Tequila is most certainly one of the most ordered drinks at this bar, but it’s always worth double checking via one of these vegan drinking apps which liquors on hand are fit for vegans. 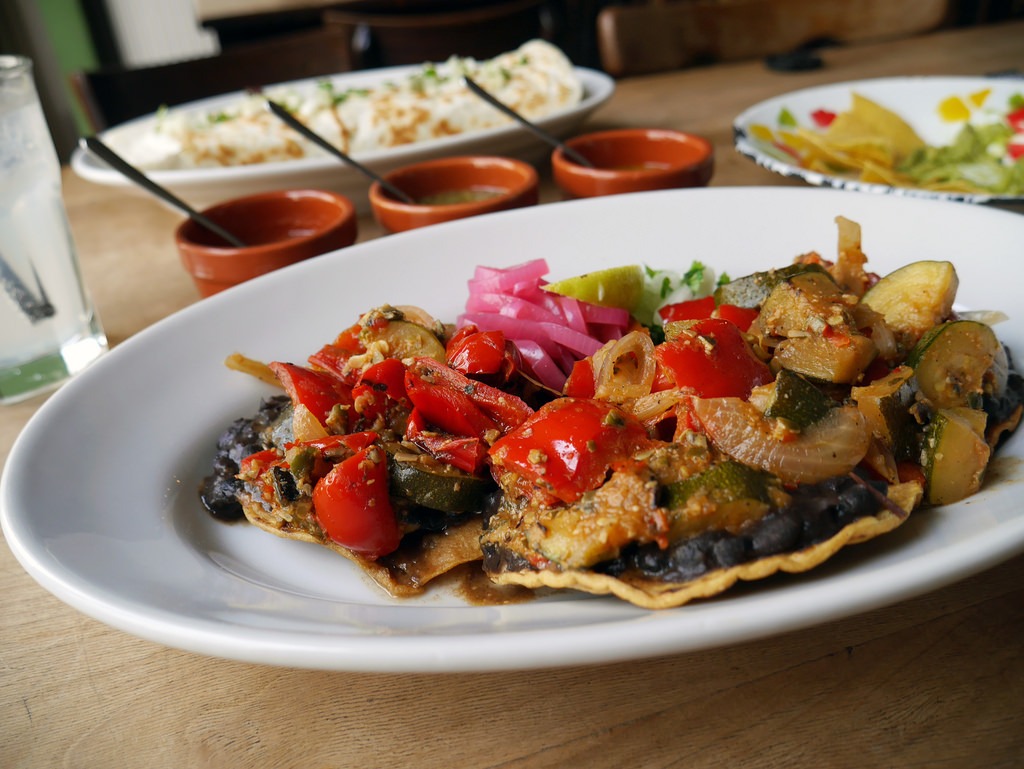 For fans of the dark and drab romantic side of bar culture, this animal-friendly cafe and bar is undoubtedly one of the most notable. With its classic artistic sheen there’s no wonder that this cafe has been a meeting point for alternative culture for several years as people of all ages gather to discuss the increasing need for activism against prejudice over one of Morgenrot’s famous vegan breakfast and brunch – however it’s not as exclusive as some other punk-edged cafes tend to be. It’s as welcoming as any bar and beer house in Berlin and is a great place to strike up a conversation with a local should you wish to understand more about what life in Berlin is like.

One of the biggest reasons that Cafe Morgenrot makes this top list of 10 vegan bars and restaurants is due to the regular vegan-friendly buffet that runs from Friday through to Sunday between the hours of 11 am until 3 pm.

As more vegan bars and restaurants continue to open in 2021, there’s no better reason to put a visit to one of these great choices top of your agenda whilst staying at one of MEININGER Hotels affordable family-friendly hotels in Berlin.