Gay Amsterdam Travel: Where to Go, Dance, Drink and Shop

Our Amsterdam gay guide will help you plan a fabulous trip including tips on the gay scene, the best gay bars, parties, events and more…

Amsterdam has one of the liveliest, most vibrant and inclusive gay scenes in Europe. The capital of the Netherlands has been a bastion of LGBT+ culture for centuries and has seen its community survive and thrive despite political and social adversity. Today, Amsterdam is home to some of the best gay clubs, bars and hotels in the world, offering gay travelers a truly unique and exciting visit. The Netherlands is of course the first country in the world to introduce marriage equality, gay people living in and visiting the Netherlands are so well accepted and integrated that at first there might not seem to be much of a gay scene.

Amsterdam, also known as the “Venice of the North” because of its distinctive canals and narrow bridges, is one of the most charming and exciting cities in the world and offers something for everyone. The city is also rich in culture and art, with a variety of galleries, museums and exhibition spaces showcasing the best art from the Netherlands and beyond. Major attractions include the Anne Frank House, the Van Gogh Museum, and the Museum of Sex. 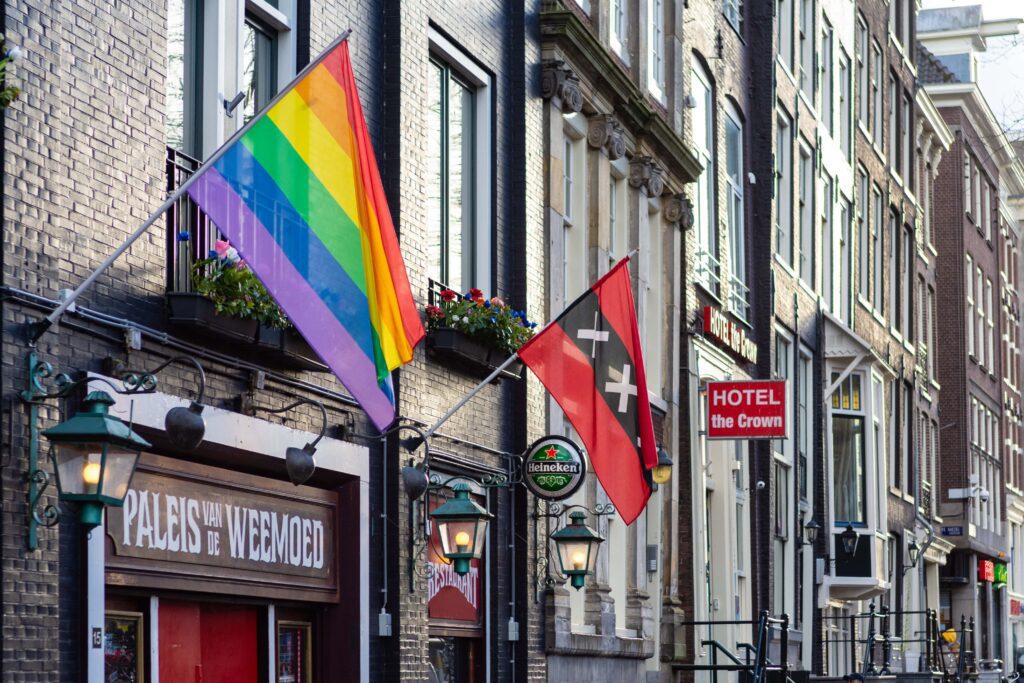 Reguliersdwarsstraat is the most important gay street in Amsterdam. It is located just outside the city center in the canal ring in the south of the city. This is the gay area of Amsterdam where you can find most gay bars, stores, clubs and cafes. Aside from being THE most unpronounceable name for a gay village (!), it is definitely one of our favorites and is why we rank Amsterdam as one of the best gay destinations in Europe.

Other points of interest in Amsterdam include the Homomonument and Pink Point. The Homomonument is a large pink triangle commemorating all the gay men and women who were persecuted for being gay during World War II. When it was dedicated in 1987, it was the first memorial to homosexuals in the world. It is located a few blocks north of Reguliersdwarsstraat, right next to the Westerkerk Church. Next to the Homomonument is the “Pink Point”, the official information kiosk for gays and lesbians in Amsterdam.

Probably the most important sight in Amsterdam that specifically has an LGBTQ slant is the Homomonument. Of course not only aimed at gay visitors, this significant monument on the Keizersgracht canal was the first of its kind in the world to commemorate all the lives of gay men and lesbians who suffered persecution under Nazism because of their sexual orientation. Take a moment here to remember and be inspired by those who fought.

Amsterdam is well-known for its clubbing scene, and of course any of the most famous ones such as Studio 80, Club Up or Trouw are going to be gay-friendly, but for a specifically queer crowd, try PRIK, an intimate bar that has the dance parties on the weekends or Queers which regularly hosts drag shows. For something a bit earlier in the evening, try De Spijker, the city’s oldest gay bar that opens up as a café in the afternoons and offers a laid-back atmosphere. Another good option is Getto, a gay café, bar, restaurant and club all in one which hosts an impressive variety show every Thursday night and guest DJs at the weekend.

With its myriad independent boutiques, fashion labels and designers, Amsterdam can easily be considered something of a mecca for shopping-lovers, but it’s also home to several gay-specific shops selling unique and unusual items. Head to Mr B to get to know your inner rubber or leather fan and explore their range of high quality fetish gear and sex toys, which are presented in a friendly, inviting environment: staff will likely even invite you to sit and have a coffee while discussing the best item for you.

For something more than just a sex shop, check out Gays & Gadgets, a friendly business that sells all the usual sex toys (as well as some more unusual ones) plus fun but essential pride items such as rainbow flags, badges and glitter guns. It’s also a great place to come for some silly gifts for your best gay or straight friends: how about a fancy lube dispenser or a penis baking form for the kitchen? Finally, don’t miss Vrolijk, a cute little bookshop in Binnenstad, this place sells a wide range of fascinating gay literature, including comics, travel guides, health, coming out and parenting books. They also have an extensive offbeat and mainstream movie selection as well as plenty of art and photography books and magazines.