The Flemish fashion scene is currently booming, filled with refined, timeless and tasteful creations. Fashion trends? Who cares! In the city along the Scheldt, it’s what you like that matters.

The fashion pulse in Flanders beats incredibly lightly. Polished flats, sneakers and flat ankle boots walk by in a silent parade before the full-length display windows. The typical clacking of high heels is muted. In Antwerp’s fashion quarter near the Nationalestraat, understatement is the word. Minimalism. On both sides of the glass. One eye-catching piece is deemed enough. Yet one particular display window brings the parade to a halt; women stop in their tracks, begin to whisper to one another. In the window of Belgian fashion designer Dries van Noten, gold-painted wooden stools are stacked on top of each other, forming wobbly towers. In front of this stands a mannequin, straight as an arrow, its rigid body clothed in a white pencil skirt featuring a bird of prey bearing down on some words, paired with a soft pink jacket and white-gold pumps.

“It’s my favourite shop”, says Kaat Debo, “if only for the window dressing! I always look forward to the new display”. Every day on her way to work, Kaat passes Het Modepaleis – the fashion palace – as the flagship store’s designer modestly named it. Kaat is the director of the Museum of Fashion that lies on the other side of the street, housed in a massive grey pre-war building. Together with the Flanders Fashion Institute and the Fashion Academy, they form the Modenatie, the pivotal centre of Belgian fashion.

The Academy is one of the foremost shapers of talent in the world, often acting as a springboard straight to Chanel, Dior or Armani. No one here is interested in mainstream clothing. The lecturers want to be surprised and recognize their students’ character in their sketches, leading to the exclusive selection of the most creative. “The Academy is an avant-garde cocoon”, says Kaat; a cocoon in which each student develops his or her unique drawing style. Many graduates have gone on to achieve world fame, and the forward-looking evening dresses of Flemish fashion designers have long been featured on international catwalks. They bring Antwerp renown and respect and attract fashion lovers, creative types and up-and-coming designers to the city by the Scheldt.

And Antwerp is indeed a charming host. The city revels in the charm of its own chaos, forming a maze of cobblestone streets, hidden courtyards and repurposed warehouses, in which restaurants, galleries and clubs have opened their doors. Half a million people from more than 160 countries live in the Flemish seaport.

The minute the first rays of sunshine break through the grey clouds, locals and tourists stroll about the large squares, sit on benches, eat sticky sweet waffles, thick chips or pralines, with paper shopping bags from boutiques and souvenir shops, antique dealers and jewellers, lined up at their feet. For Antwerp is immensely rich, with around sixty per cent of the world’s rough diamonds being traded here. The streets are lined with baroque and Art Nouveau houses, Rubens’ work is ubiquitous – and so is fashion.

Sofie Claes is a Belgian designer who chose to settle in Antwerp. Her garments are cool and edgy, cut in dark, flowing fabrics. “There is no Antwerp style”, declares the 29-year-old designer. According to her, diversity is the city’s trademark. Sofie buys most of her fabrics in Italy, while the collections are manufactured in Belgium. Exclusive fashion that comes at an exclusive price. A price tag dangling from a black leather jacket reads €1399. Although she is self-employed, Sofie is by no means isolated. “As young designers, we’re well connected and we exchange with one another.” She receives support from the Flanders Fashion Institute, which publishes calls for proposals, organizes workshops and sends young designers to fashion shows in New York and Paris.

Alongside new creations, old handcraft is also sought after in the fashion hub, such as can be found in Ganterie Boon, only a few minutes away from Sofie’s shop on Lombardenvest. Founded in 1884, the wood-panelled interior of the shop enfolds customers in an historical atmosphere; the till is an antique and the wooden shelves are stacked with worn, hand-labelled cardboard boxes in which hundreds of gloves are stored: plain single-colour models; gloves with holes for convertible drivers; eccentric gloves in imitation snakeskin. The manufacturer is renowned beyond Belgium’s borders for its peccary leather gloves, a much sought after rarity that requires hours of handiwork and up to 2000 stitches. The price for a pair is €100 and upwards. 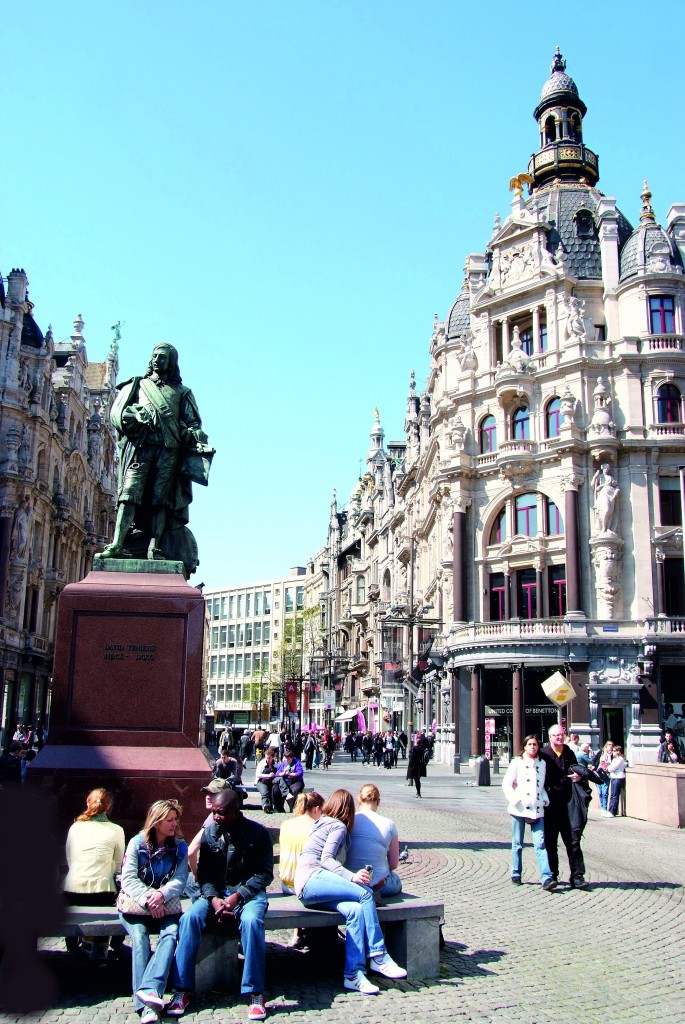 Shopping can be expensive in Antwerp, but it doesn’t have to be. In this charming small city that boasts all the international flair of a world-class capital, there’s something for every wallet. In spring and autumn, the sales offer exclusive fashion bargains. High-end designers such as Dries Van Noten, Stephan Schneider and Christoph Broich sell their left-over stock at discounts of up to ninety per cent. Many designer shops are located around Nationalestraat and Groenplaats, as well as street fashion and second-hand shops such as Vintage Store Sussies, where innumerable rails are hung with clothing from the 1930s to the 1980s. In the hip concept store YOUR on Kloosterstraat, things are rather wilder, more colourful, louder, with a selection that spans chewing gum, cosmetics, watches, bags, belts – and of course, cool clothes. Even in antiques stores such as Tante Brocante in Kloosterstraat, Antwerp’s proximity to the fashion world is unmistakable: next to milk churns and deer antlers, you’ll find a dozen French dress forms lined up like tin soldiers. Each one of these originals, from the most important commercial street in Paris (and the world), is labelled “Couture – Faubourg St. Honoré”.

Currently, while fluorescent colours, animal prints and high heels totter along the pavements of many international capitals, the fashion city of Antwerp remains pleasantly calm. Skinny trousers, flats, oversized sweaters. Black is the new neon. Even on the main high street, the Meir, where one big clothing chain store follows another, the people strolling along the grey pavement are dressed rather unostentatiously. “Bling bling” is a fashion faux pas. Instead, the Madonna in St. Andries Church wears haute couture. The Flemish fashion designer Ann Demeulemeester dressed her in a light sequined gown, complete with black fringe and a fluffy feather boa. Typical of Antwerp, where being different is allowed.

Tip: The Fashion in Antwerp App is an excellent shopping companion, with fashion icons sharing their insider tips.