185 years ago the cornerstone was laid for an original Berlin drink. Now the liqueur will reclaim the capital city.

‘Keep it clean and tidy, bring it back on Friday!’ With this curt instruction, the 30-year-old David Bowie was employed as a human advertising column and placed inside a Mampe ‘Halb & Halb’ bottle to advertise the bitter liqueur in the 1920s. Only in the movies, of course – this one was called ‘Just a Gigolo’ and was a flop with the critics when it came out in 1978. Today, by contrast, it is a cult classic. Just like the brand that Bowie was advertising in the film: Mampe. In the 1920s the herb liqueur was a permanent institution in Berlin pubs and it continues to be a genuine Berlin original right up to the present day. However, the story actually began 150 kilometres northeast of the capital city.

In 1831 the physician Dr. Carl Mampe was tinkering away in the Pomeranian region of Stargard, mixing alcohol and herbs together in order to make a remedy against the cholera outbreak that was taking hold around him. He invented the ‘bitter drops’, which were promptly sold in the chemist. This schnapps for the stomach did not help much against the infectious disease, but it did go on to become a money spinner throughout the country.

During his lifetime, Carl Mampe Senior passed on his secret recipe to his two stepbrothers, Carl Junior and Ferdinand Johan, who, hungry for success, founded two separate Mampe companies which are supposed to have competed against each other for the following one hundred years. Ferdinand Johan founded the company ‘F.J. Mampe’ in his hometown of Stargard in 1835. Scarcely two decades later, in 1852, Carl Junior opened his first factory, later to become ‘Carl Mampe AG’, which was located in the Prussian province of Koszalin and where various types of spirits were distilled. 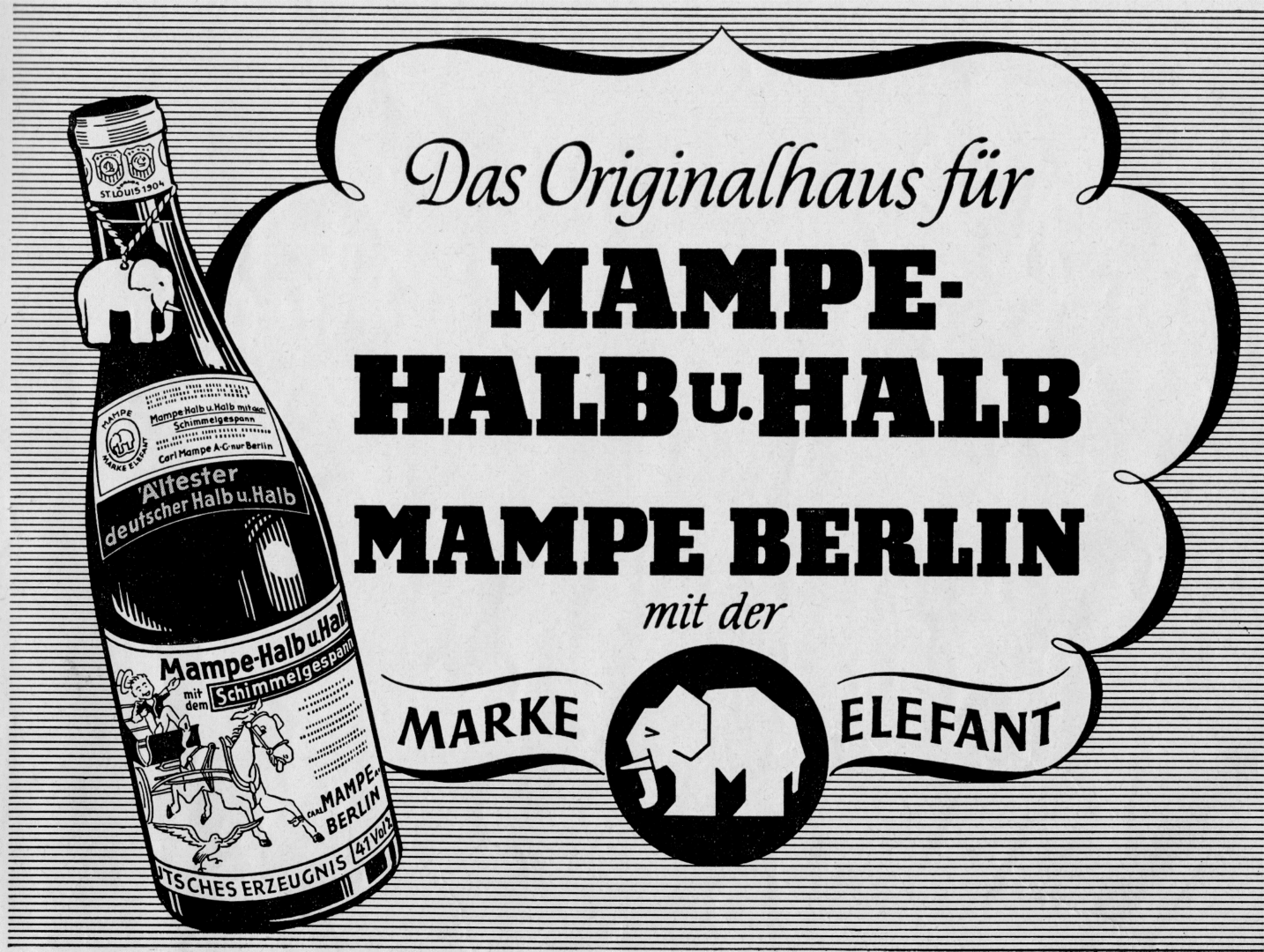 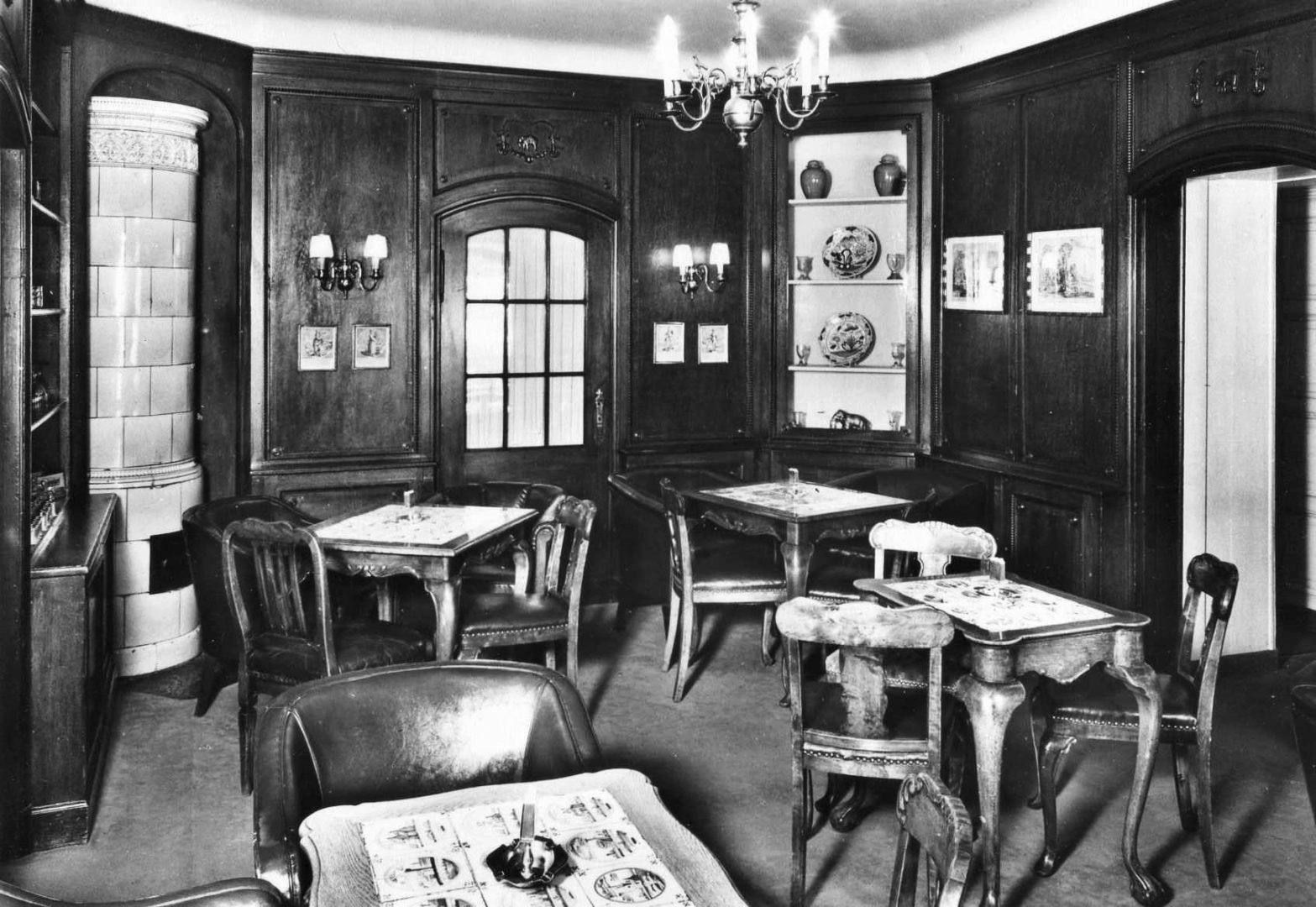 Mampe first became a genuine Berlin original, however, when Carl Junior moved production to the city in 1877. Berlin, at that time the booming capital of the early German Empire, was the mainstay of the company’s history. It was here in 1894 that Carl Junior developed the name for the brand: ‘Mampe Halb & Halb’, a liqueur made from bitter oranges and 130 herbs. Half sweet, half bitter, and so good that it promptly won the grand prize at the World Fair in 1904. Mampe Berlin was already a global brand at the turn of the century.

Indeed, the fame of Mampe would increase further. The company owned restaurants, nicknamed ‘Mampes Gute Stuben’ (Mampe’s Living Rooms), and provided the whole of Berlin as well as Frankfurt am Main and Leipzig with the famous Halb & Halb, gin and vodka during the 1920s. The most famous Gute Stube (Living Room) in Ku’Damm in Berlin opened in 1917. There people met to chat, but most importantly to drink. It was also popular with artists: Kurt Tucholsky is supposed to have frequented it and the Austrian author, Joseph Roth, finished his world famous novel ‘Radetzky March’ there.

The liqueur manufacturer was especially dedicated to promoting sport, and in the 1970s it allowed the federal league football team Hertha BSC to print elephants on its uniforms. Mampe’s commitment to motorsports also contributed to its legendary status: German racing icons drove to victory with the support of their sponsor Mampe. Indeed, it was not uncommon for the complete Mampe advertising department – the elephants Carl and Mampe, Hertha BSC players and the racing car of the Mampe racing team – to all meet up in front of the Gute Stube in Ku’Damm.

However, in the 1980s the brand so accustomed to success began to wane in importance. First the Mampe Stuben closed, then later the bitter liqueur stopped being sold at the corner bars and by retailers. The long established company appeared to have slipped into oblivion. At the beginning of the 2000s there were only about 10,000 bottles sold throughout Germany, and Halb & Halb was a term used solely by the original born-and-bred inhabitants of Berlin.

But this is all about to change with the foundation of Mampe GmbH. Tom Inden-Lohmar took over the dormant cult brand in 2012 with his partner. They gave things a good shake-up and reduced the selection drastically down to just five products, including Halb & Halb. Now Mampe produces around 60,000 bottles a year – an improvement, but no comparison to the mass production of the last century. The concept is working, however. In October, ‘Mampes Neue Heimat’ (Mampe’s New Home) will open in the Bergmann neighbourhood area of Berlin. Inden-Lohmar and his team will offer tours and Mampe sampling, and a museum will reveal the history of the brand. Part of the production is also intended to be based in Berlin. The advertising specialist Inden-Lohmar’s new slogan is: ‘Not for everyone. Only for Berlin’. This is also why Mampe is only available in Berlin – and this shouldn’t change in the future.