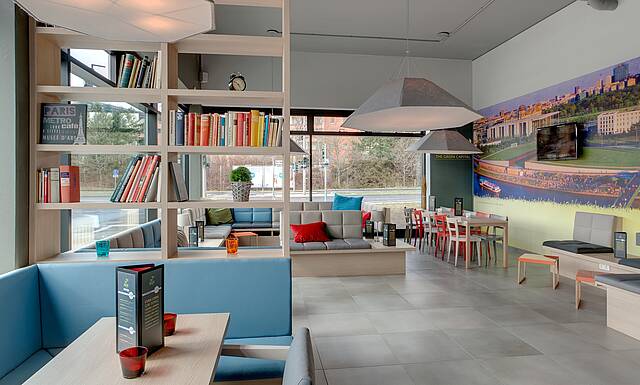 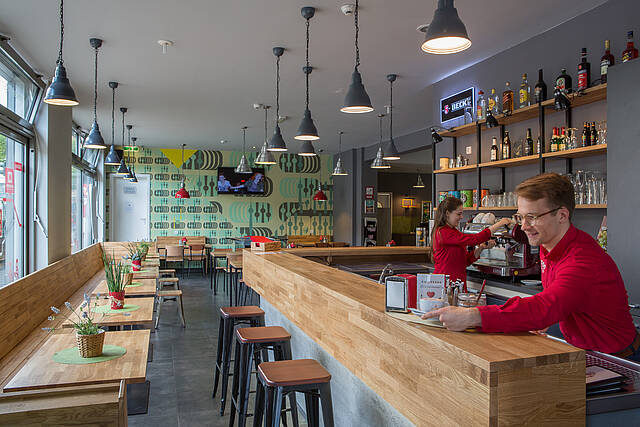 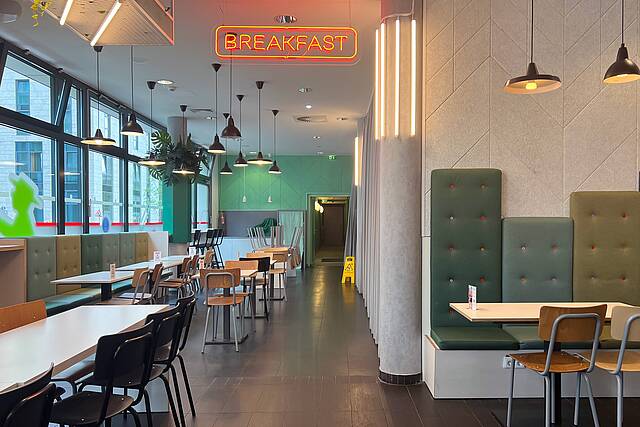 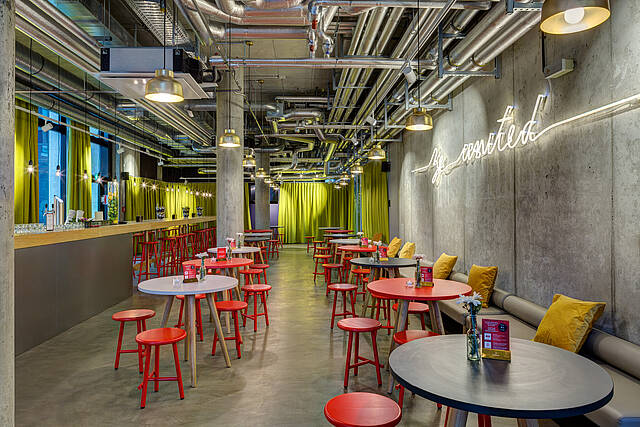 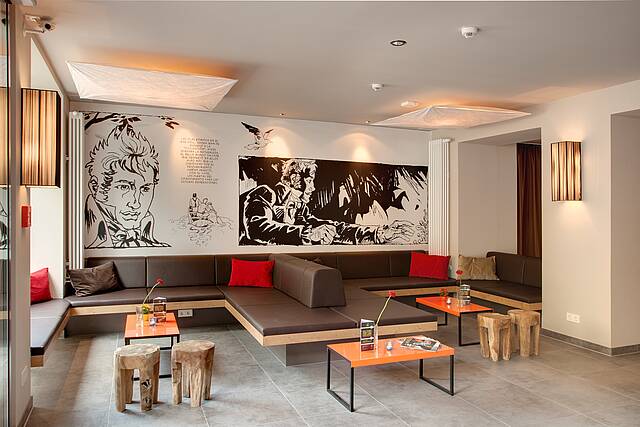 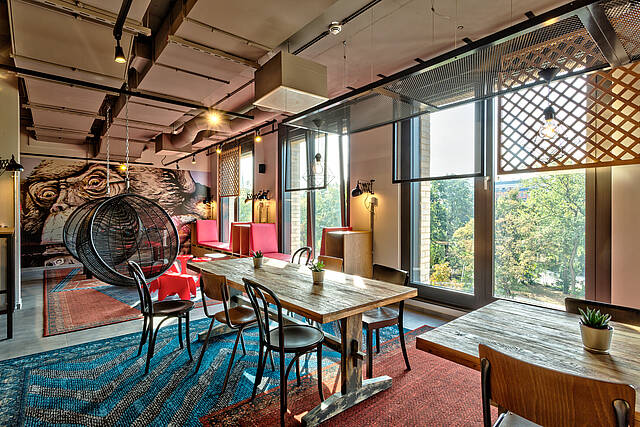 To view out maps, you will have to modify your privacy/cookie settings

Berlin has so many wonderful places to visit and there is a MEININGER Hotel at 6 of the hotspots. 6 Berlin Hotels: Right in the center near Alexanderplatz, at the East Side Gallery, at Central Station, Berlin Brandenburg Airport (BER), Berlin Mitte and Tiergarten.

Due to the central location of the MEININGER Hotels in Berlin it takes no time at all to go on a day trip. This is a delight for families and city break tourists who can quickly get back to the hotel in the evenings, which even leaves them enough time for a little game in the game zone.

Backpackers on a tight budget looking for a central youth hostel in Berlin are also in the right place at MEININGER. It doesn’t cost much to stay in the dormitories and there is a guest kitchen which can be used around the clock.

The affordable shared rooms are ideal for tour groups. As well as the breakfast buffet, MEININGER provides extra menus upon request for the afternoon and evening meals.

School classes also feel comfortably at home whilst on holiday at the MEININGER Hotels. Free WiFi means that being on a class trip doesn’t mean having to go without surfing the net.

Business people especially benefit from the close proximity to long distance travel connections of the MEININGER Hotels at Central Station and the airport. So there is more time to relax at the hotel.

Berlin Sightseeing:
The best city tours and activities in Berlin 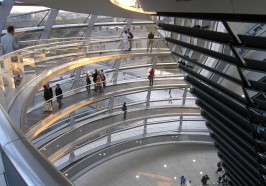 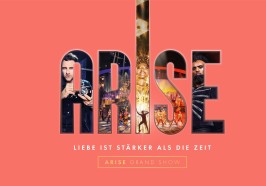 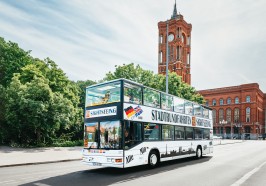 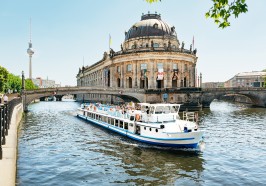 What is Berlin famous for?

Berlin, the capital of Germany and the country's largest city, is a major center of politics, culture, media, history and science. Despite the devastation of WWII, and following decades of decay to the east of the famous Berlin Wall, the city has been rebuilt in a way that celebrates its success while acknowledging a dark past. But that's not all what Berlin is famous for.

Berlin's nightlife is fascinating to people from all over the world, it attracts around 40,000 to 50,000 guests every weekend. It is home of the popular night club Berghain. Moreover, Berlin offers an eclectic mix of new and classic architecture and vibrant streets. It's hard to find a corner of Berlin that is not decorated with street art, particularly in trendy neighborhoods like Kreuzberg and Neukölln.

In Berlin, you will find a diverse food scene thanks to Berlin's multicultural society. Berlin was pioneering for LGBT rights in 1867 with Karl Heinrich Ulrichs on the lead. It is known that the city's energy and liberated way of living offer a space for people to express themselves freely.

What are the best things to do in Berlin?

Some of the places to visit when in Berlin:

Berlin is an extremely safe city. However, like all metropolitan cities, Berlin has its share of petty crime. Just use common sense and be aware of your belongings when in crowded or touristy areas.

Berlin is by far the most affordable capital in Western Europe, so it's a great place for budget-minded backpackers and anyone wanting a great travel deal. Berlin has world-class museums, low food prices, a unrivalled nightlife, and affordable accommodation.

How many days in Berlin is enough?

Sure, you can run through the best of Berlin in one day, but it takes at least three full days to visit various neighborhoods and scratch the surface of Berlin. To get a feeling for the city's various main sights and some more hidden attractions you need four to five days to explore this city.

What food is Berlin famous for?

Currywurst (translation "curry sausage"). Berliners may not eat it all the time, but Currywurst is definitely sacrosanct to them. If they visit a different region in Germany and hear that the local Currywurst is supposed to be better than the Berlin version, their loyalty towards Berlin Currywurst becomes obvious and they will point out that good Currywurst can only be found in the capital.

Where is the best place to stay in Berlin?

Berlin is huge. Every neighborhood in Berlin has its own vibe and picking where you stay in Berlin is going to have a huge influence on your experience. Top neighborhoods:

If you want to be in the heart of Berlin and close to the many attractions, sightseeing highlights and major monuments.

Hip, young and family-friendly neighborhood where you will find many organic food stores, cool bars and shops.

Why was the Berlin wall built?

The Berlin Wall was built in 1961 to stop an exodus from the eastern, communist part of divided Germany to the capitalistic, more prosperous west.

Where was the Berlin wall?

The Berlin Wall was more than 140 kilometers (87 mi) long. The wall ran through the center of the city and all around West Berlin. The remains of the wall can still be seen today at: Old St Hedwig Cemetery, Bösebrücke, Checkpoint Charlie, East Side Gallery, Berlin Wall Memorial, Gutspark Groß Glienicke, Invalid cemetery, Mauerpark, Puschkinallee/Schlesischer Busch, Potsdamer Platz and Topography of Terror.

Which Berlin airport should I fly into?

The new airport replaced nearby Schönefeld as well as Tegel and Tempelhof airports and became the single commercial airport serving Berlin and the surrounding State of Brandenburg, an area with a combined 6 million inhabitants. With projected annual passenger numbers of around 34 million, Berlin Brandenburg Airport is set to become the third busiest airport in Germany surpassing Düsseldorf Airport and making it one of the fifteen busiest in Europe.

Which Berlin pass is best?

Comparison of the 72-hour cards and the 3-day cards:

The Berlin WelcomeCard is valid for 72 hours and covers local public transport fare zones A and B. The price is 29 EUR per person. The ticket includes a printed guide with tips and tours, a removable city map for Berlin and Potsdam as well as a map of the local public transportation system. The validity period of the 72 hours starts at the time of validation. The Berlin WelcomeCard grants discounts up to 50 percent for over 200 sights and attractions as well as discounts with various partners.

The Berlin pass costs 124 EUR and is valid for three consecutive days from the day of validation. It is therefore advisable to validate the card as early as possible in the morning. It is valid in the ABC fare zone. Pass holders also receive a printed guide. The Berlin Pass grants access to about 50 sights and attractions for free.

Berlin where to go at night?

Located in former East Berlin, Warschauer Strasse is the top nightlife area in the German capital.

Kreuzberg - Hipster Berlin at its finest

Kreuzberg, located in the south-central area of Berlin, is synonymous with hipsters, alternative nightlife and party.

Mitte - For a little bit of everything

Mitte is the heart of Berlin. It literally translates as "middle" and it is the best area to stay in Berlin for a vivid bar- and nightlife, but also for sightseeing and getting around easily. As it is literally located in the center, it is well connected in all directions to visit all the attractions the German capital has to offer.

Nollendorfplatz - The gay heart of Berlin

Nollendorfplatz and the whole district of Schöneberg have been the epicenter of gay life in Berlin since the 1920's.

How many people are traveling?
11 people or less 12 people or more You have to accept the privacy policy to proceed
Our chat language is English
Free of charge
Child discount: 50% OFF
Familiy discount: 15% OFF