Amsterdam, oh Amsterdam! Some days I think more about this city than most women think about their boyfriends. I see the adorable narrow and leaning town houses, the streets full of carefully decorated shops and I hear the impatient chimes of hurrying cyclists. Daydreaming, I see before my eyes the countless canals that give Amsterdam its familiar face. I remember the magical feeling of taking in the city while cruising the canals. One could even claim that who has never seen Amsterdam from the view of a boat has never seen Amsterdam at all. Come with me, and let’s discover Amsterdam as the city looks from a tour of the canals.

The 165 canals (or “grachten”) and 1,281 bridges permeate all of Amsterdam. Since the city has more canals than Venice, it has romantically been called “The Venice of the North”. We start our trip at the Westerdok just north of the main train station by the boat rental firm Canal Motorboats. In the harbour, we have plenty of space to try the first curves with our new acquaintance: a steady aluminium motorboat. Good manoeuvring skills can surely prove themselves valuable in the narrow canals further on. But the traffic rules here are simple: smaller boats give way to bigger ones.

First we take the outer canal belt of Amsterdam, the Prinsengracht. The belt consists of four canals, which encircle the inner city core of Amsterdam with its world famous Red Light District and coffeeshops. These waterways are all straight and we can’t possibly lose our way. Time to take a look at the lovely houseboats left and right. Here’s a view into a living room, there’s a terrace and in between we salute an older gentleman tinkering with his boat. There are allegedly 2,500 houseboats in Amsterdam and the spectrum ranges from dilapidated pirate ships to designer pieces. 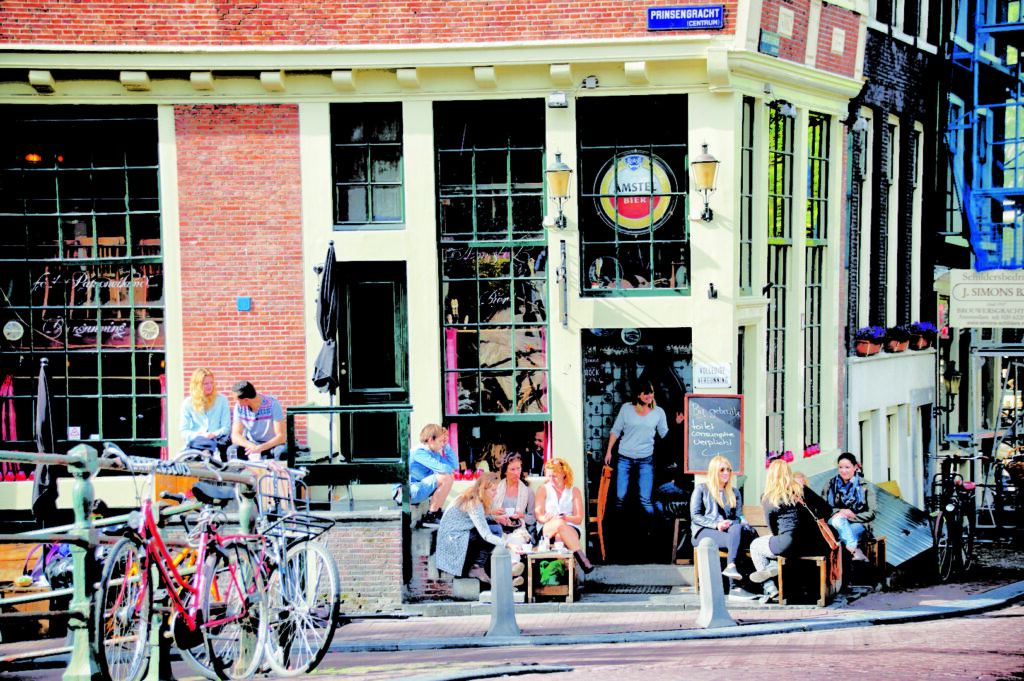 We make our way along the Prinsengracht, which crosses the Negen Straatjes: an area with nine streets full of hip second hand shops, nice cafés and the colourful lifestyle of Amsterdam. We park our boat and disembark at the Elandsgracht in one of the more stylish neighbourhoods of Amsterdam. Here, we treat ourselves to ice cream at Yscuypje. And since they offer almost forty different sorts, it’s okay to make it a big one. 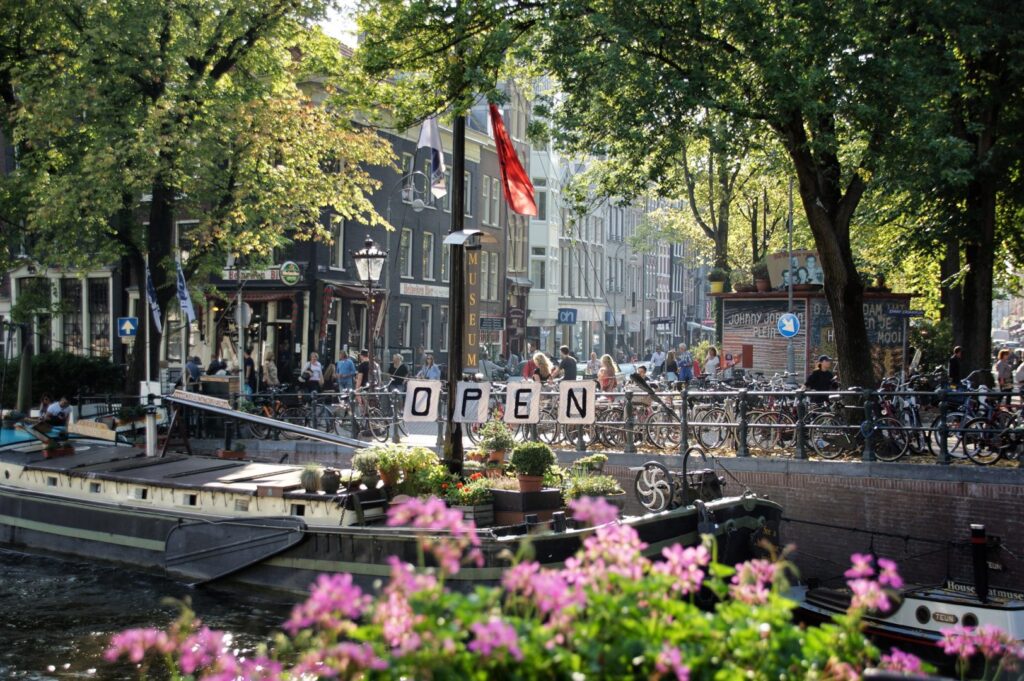 We go further along the belt and are amazed by the extremely narrow and increasingly leaning houses of the city. The houses are so long and slim because in earlier times taxes were based on the width of the houses, yet people needed a lot of storage space. Their leaning postures are due to the moist and sandy ground. It takes us about an hour of sailing before we cross the Amstel River in the southern part of the city and turn back to return to where we came from. We are now halfway around the city. If you have enough time and are fond of antiques, you should plan a stopover at the Waterlooplein flea market on a Monday or Saturday. 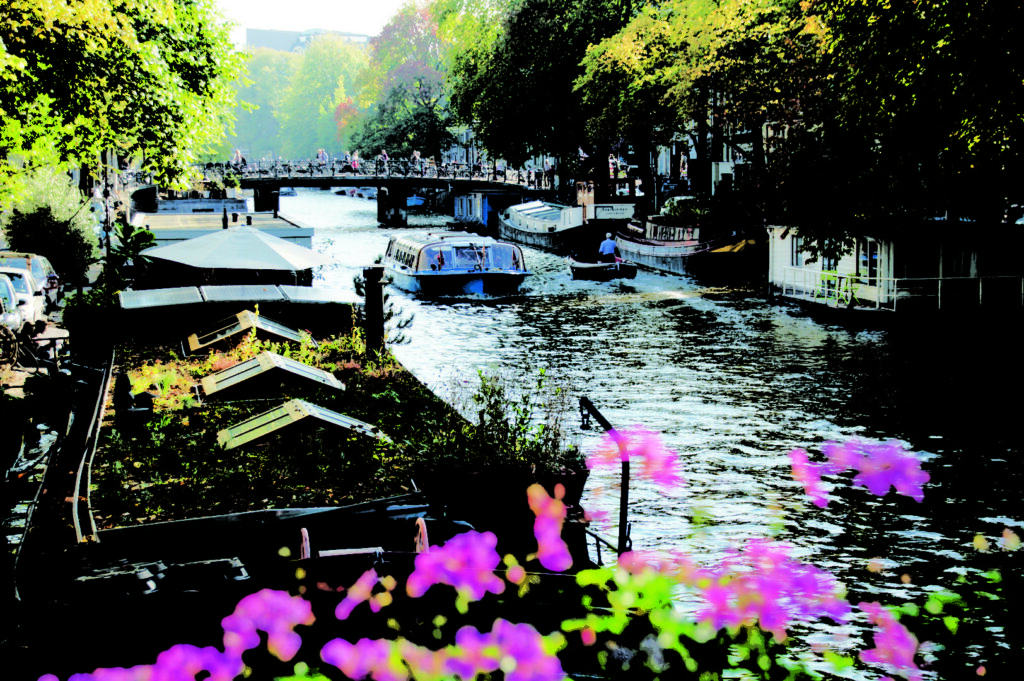 The way back takes us along the Herengracht, a parallel canal to the Prinsengracht that led us here. The street is the historical home of the city’s wealthy bankers and it has some of the most magnificent and probably most expensive canal houses in Amsterdam. We are flabbergasted by the splendour: chandeliers as far as the eye can see. For more grandeur, we suggest a detour to the Singel canal. Passing the floating flower market at the Koningsplein, we see Die goldene Biegung (“The Golden Bend”). The name of the street bears witness to the stunning houses and it takes us back to our starting point. 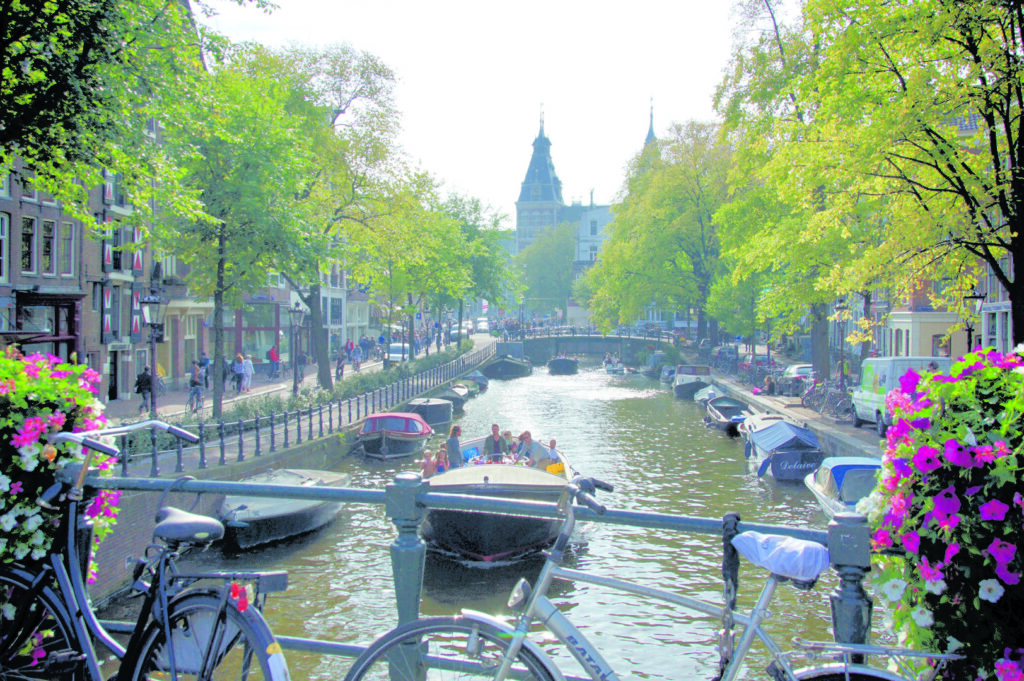 Secret tip: If you feel hungry, the Pizzeria San Marco in the southern part of the city is worth a visit. The pizza will be delivered directly to your boat through a window in the cellar. Yummy!

Facts:
At Canal Motorboats you get a good rate on boat rental: the first hour costs € 50, the second hour € 40 and the third only € 30. The boat is almost six metres long, nearly two metres wide and has enough room for seven persons. Renting a boat is easy and the strong material makes it almost impossible for anything to go wrong.