The best Indian Restaurant in Leipzig

Over half a million people currently live in Leipzig. Established 1,000 years ago, the town at the crossroads of the Via Regia and Via Imperii trade routes was granted city rights in 1065. Leipzig subsequently developed into an important exhibition and trade metropolis. The town on the Pleiße and White Elster rivers has always exuded cosmopolitan flair, remaining a multicultural melting pot to this day. And this is naturally also reflected in the culinary offerings. 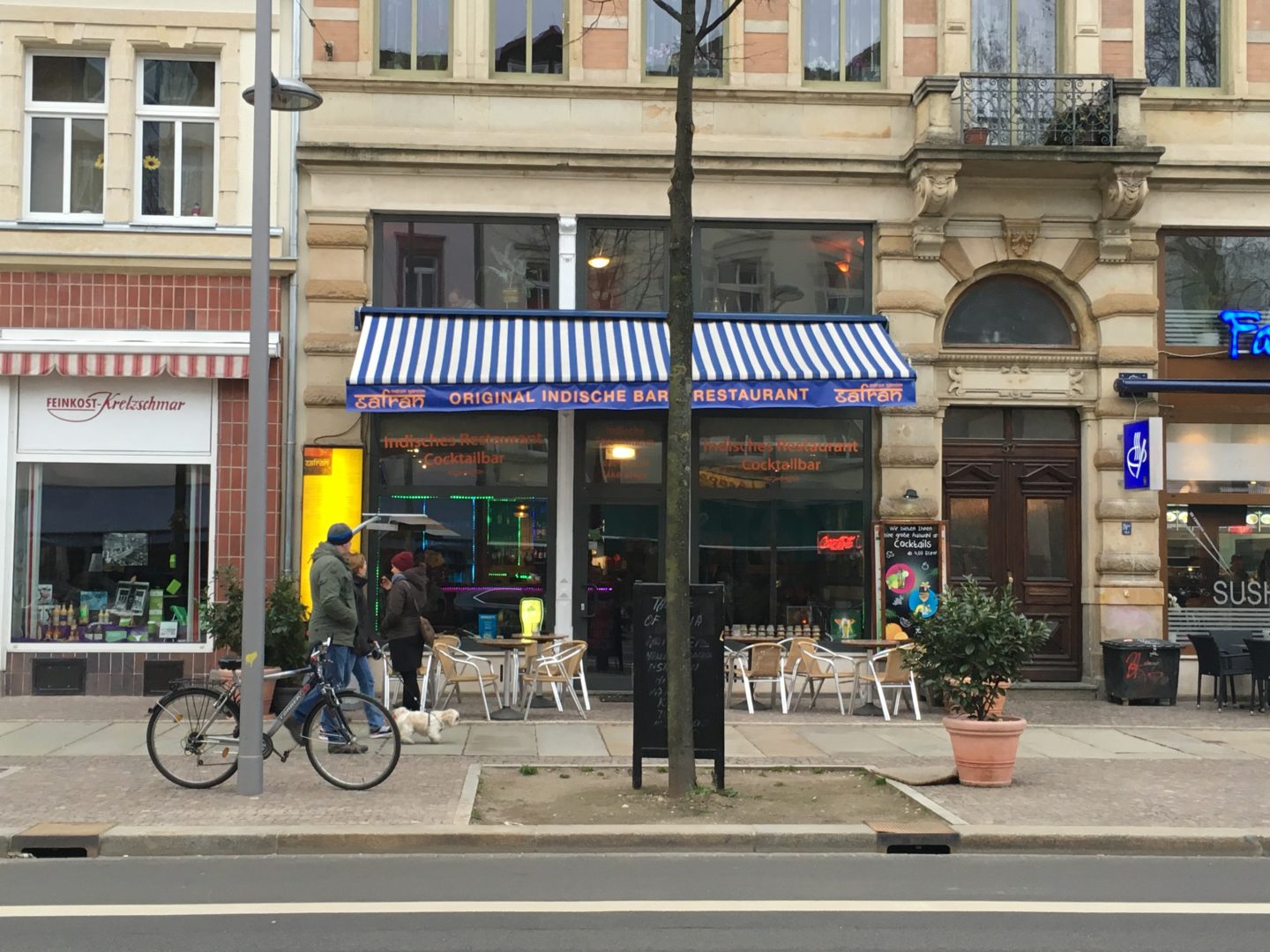 In Leipzig, there is a restaurant representing almost every country in the world. America and Mexico with burgers, spare ribs and steaks. The range of Asian cuisine in Leipzig is mostly showcased in Chinese restaurants where the chefs are actually often Vietnamese. Thai food and the odd Mongolian barbecue restaurant can be found here and there. There is no need to go without sushi in Leipzig either. Greek restaurants can be found in almost every district of the city, except perhaps in the very centre. And there are of course also Spanish tapas. Along with a whole wealth of pizza and pasta offerings from the local Italian restaurants. Some restaurants have chosen to specialise in Russian, Polish or Czech cuisine.

If the thought of a good Indian curry leaves your mouth watering, then Nikolaistraße in the city centre is the place for you: it is simply brimming with Indian restaurants. The INDIA GATE, INDIAN PALACE and MUMBAI LOUNGE are practically neighbours. And just when you thought there were not enough Indian restaurants along this road, then across the way is INDIAN FINGERFOOD. The quality of dishes is as varied as the online reviews. Ideally, you should try the food for yourself and make your own mind up.

It is also possible to sample Indian dishes from the buffet at MASALA INDIAN FOOD at Leipzig main railway station.

Outside of the city centre, restaurant owners appear unable to decide what type of food they wish to specialise in. Almost all also offer a delivery service. Pizza, pasta and much more feature on the menu alongside curry, dal and lassis at MAHARANI on Pragerstraße in the east of Leipzig, HIMALAYA on Wigandstraße in the south-west, and GANESHA on Karl-Liebknecht-Straße in the south of the city. Personally, I prefer to give such all-rounders a wide berth. On the one hand, the countless ingredients cannot possibly be fresh; on the other, even the very best chef cannot prepare specialities from endless different countries.

My last visit to an Indian restaurant was quite some time ago, back in April 2010. After almost exactly six years, it was definitely once again time for a visit. In the past, we have heard nothing but good things about SAFRAN on Karl-Liebknecht-Straße, which is lovingly referred to as the KARLI. Time to try it out for ourselves! 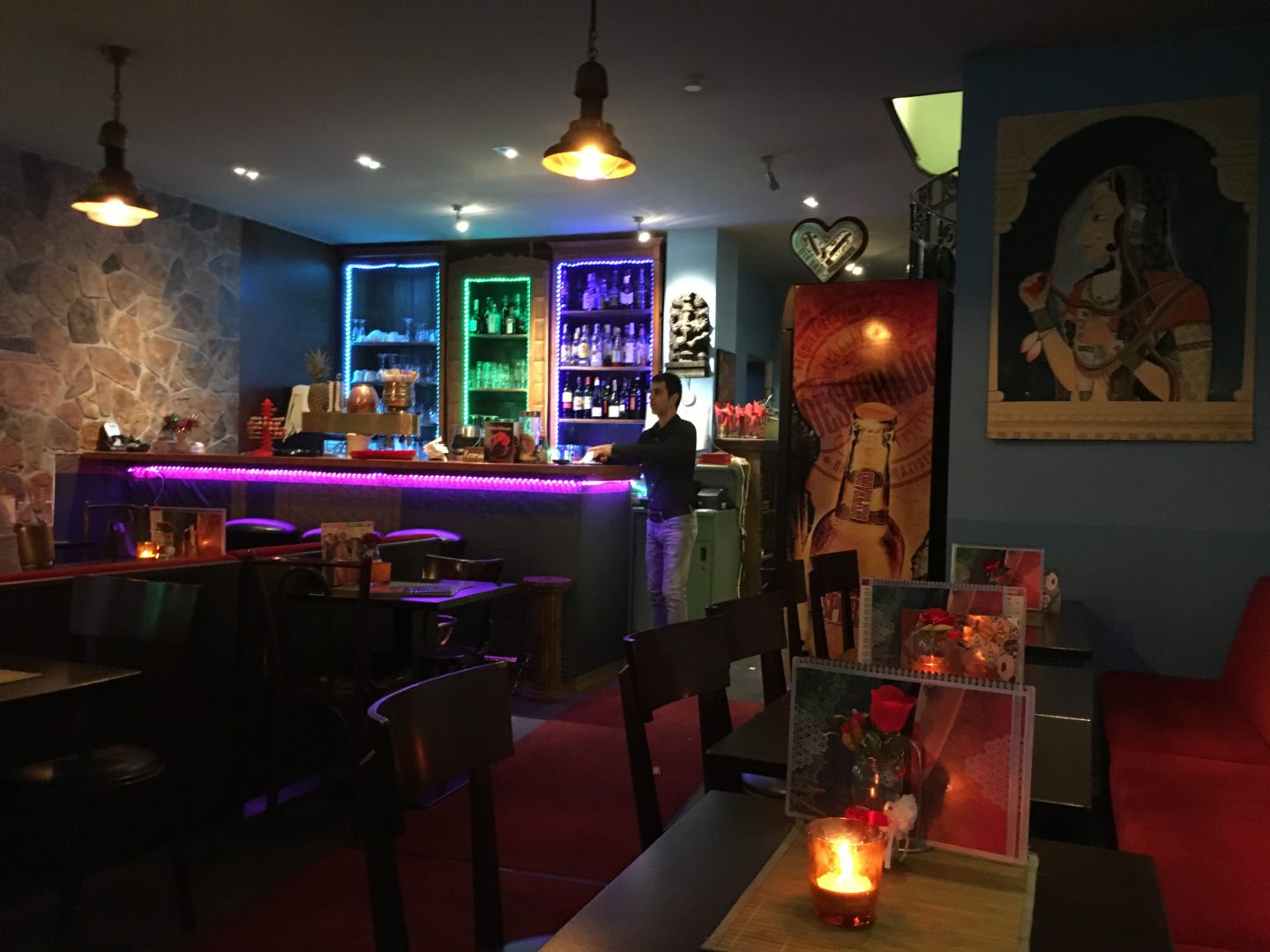 The restaurant can best be reached by using public transport. From the main railway station, take tram #10 towards Lößnig or tram #11 towards Markkleeberg-Ost and alight at Südplatz. Those arriving by car may have trouble finding a parking space. The small restaurant, which also offers a delivery service, has seating for approx. 40 people on the ground floor. Should this not be sufficient, further seating is available on the upper floor. Unless you also wish to experience the Indian climate during a visit to the restaurant, I would advise against sitting on the upper floor during the summer.

We took a seat at a table for four at the window from which the lively goings-on along the Karli can be observed whilst dining. Only a tangle of cables for the colourful illuminated signs in the window is somewhat unsightly. What’s more, two water pipes supplying the heating protrude from the wall and can pose something of a hazard. We later discover that the colourful bowls in the window are for ice cream. 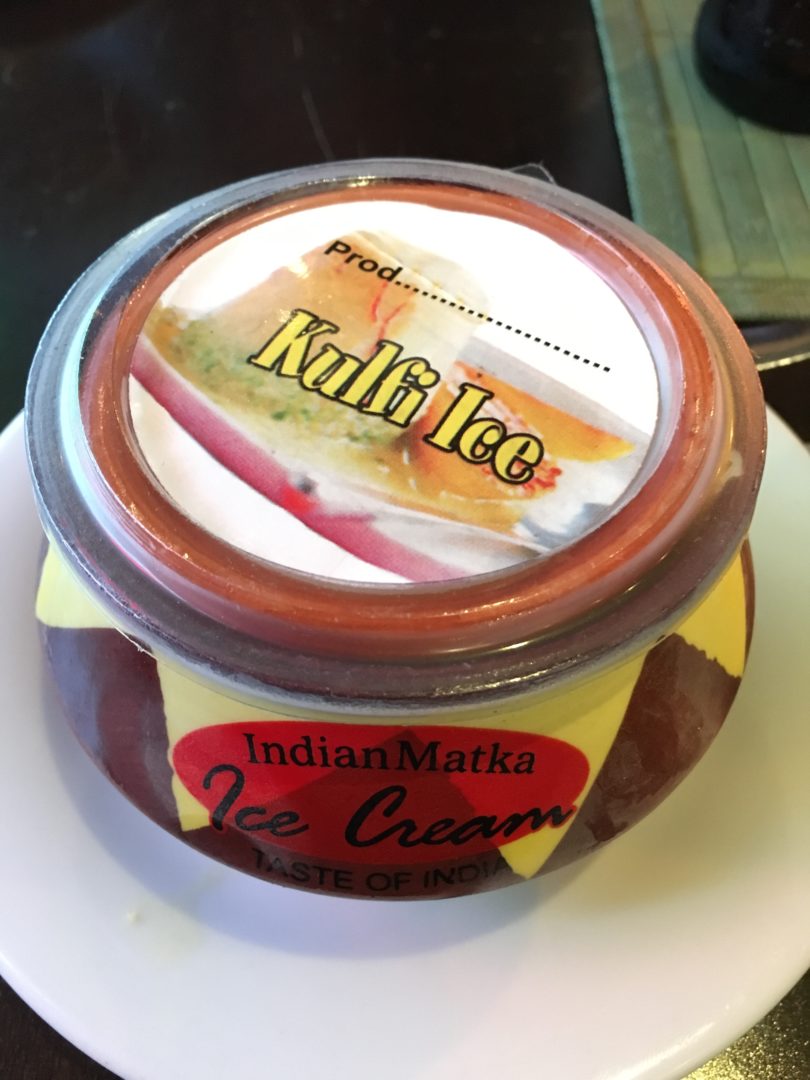 The interior reminds in part of an Indian palace and in part of Bollywood. The music adds to this atmosphere. The service is attentive, fast and extremely friendly. The kitchen appears to already know which dishes will be ordered – we don’t have to wait long for our food. My wife opted for tamatar ka shorba (a tomato soup) with a side of naan bread with butter. I like lamb, so went for aloo gosht (lamb curry with potatoes, injure, coriander and Indian spices). The lamb curry was served with rice – a somewhat unusual combination when paired with diced potato. Despite the rating of two out of three on the spiciness scale, I did not find the curry particularly hot. It is debatable whether a side salad is also served with meals in India – quite beside the fact that this is long outdated. We washed down our meals with two different types of Indian lager, Cobra Beer and Kingfisher. The sweet conclusion came in the form of tasty mango creme and kulfi (Indian ice cream with milk, saffron flowers, pistachios and cardamom) served in little clay dishes that then stood empty in the window. 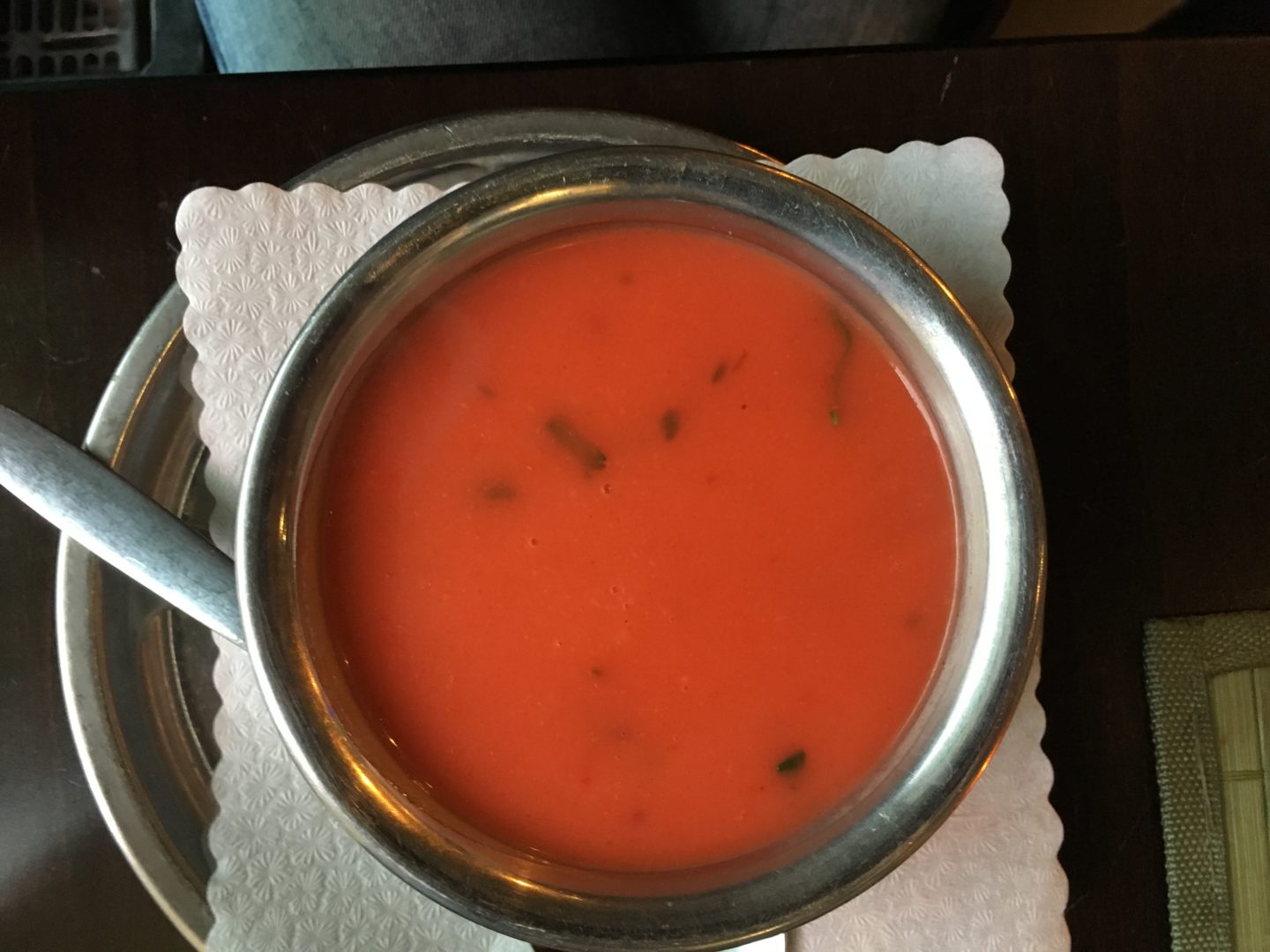 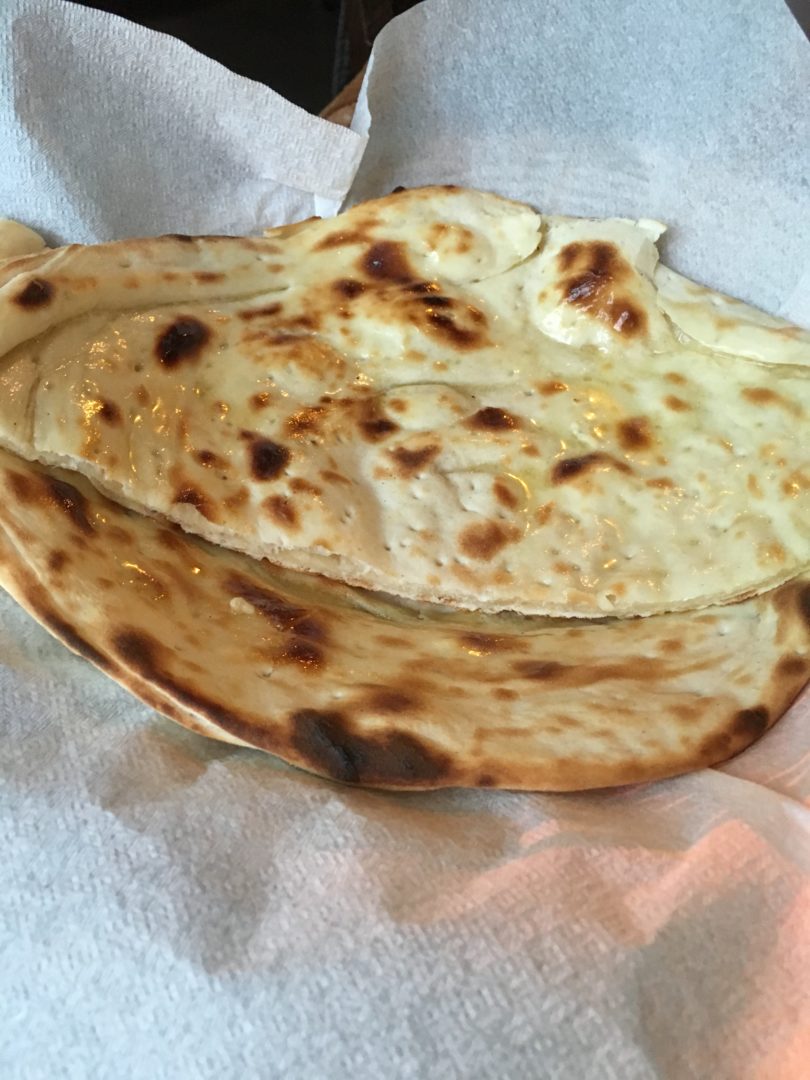 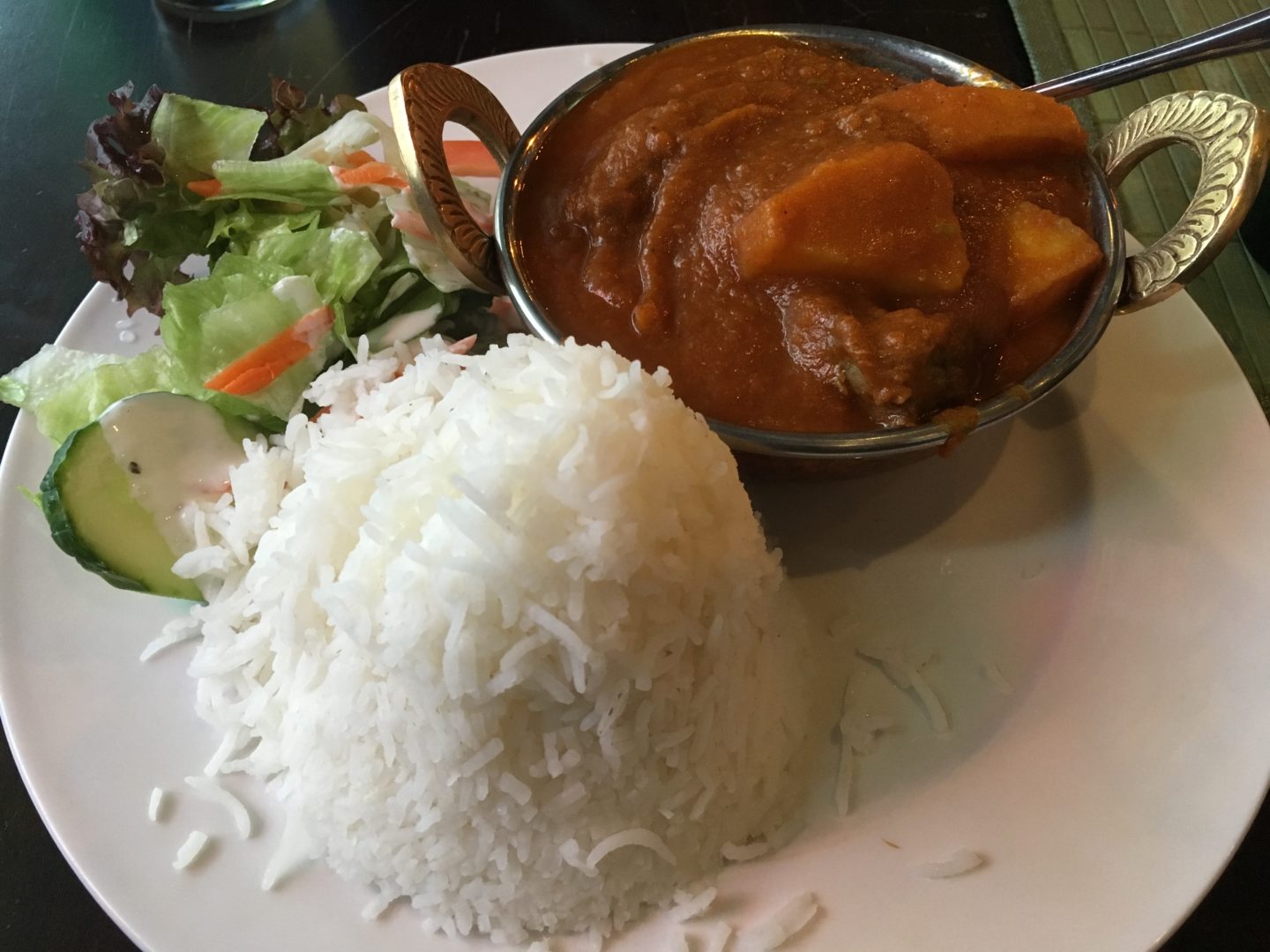 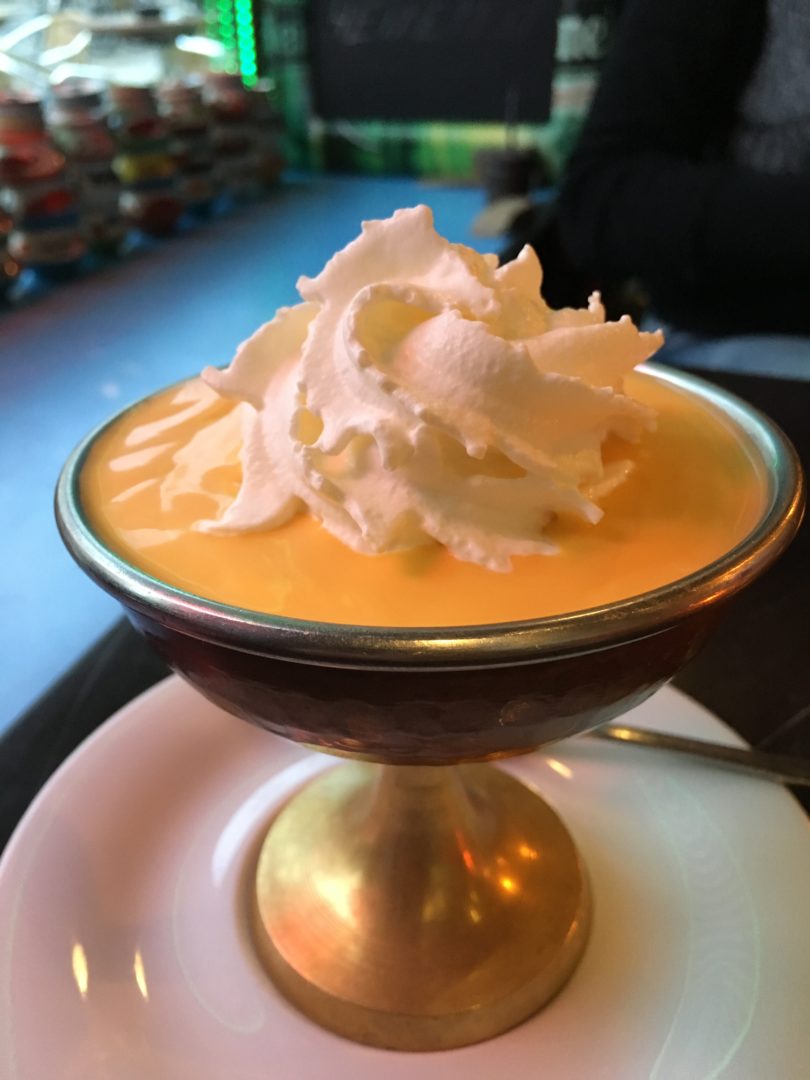 The price-quality ratio in SAFRAN is good. The toing and froing of the delivery staff disturbed a little, but cannot be avoided. All in all, we went home contentedly full and satisfied with our Indian experience.

Find the best hotel in the center of Leipzig