To many Europeans, Salzburg is best known for its sweet treat, the Mozartkugel. But in most of the world, knowledge about Salzburg is mainly based on the film adaptation of a hit Broadway musical, which in its time was about as successful as Titanic was in the nineties. Back then, around one billion people saw The Sound of Music. Most Austrians, however, haven’t actually seen it and only know about its existence through word of mouth. The American blockbuster, based on a true story, appeared in 1965 and tells the tale of the endearing Maria, who lives in Salzburg and who conquers the hearts of the von Trapp family with music and love. Besides Julie Andrews as the singing main character, the breathtakingly beautiful city of Salzburg and its striking surroundings play an important role. Even the harshest critics of the sentimental story cannot deny the visual beauty of the city.

The scenery depicted in the film isn’t far from reality. Salzburg is embedded in the dreamlike and panoramic landscape of the surrounding Alps and presents its cultural and historical riches with neatly groomed parks, sweet delicacies and a grandiose festival for music and drama. The city is not the source of alternative underground movements and it isn’t known for radical renewal and reinvention. But if you give it a try and succumb to the world of baroque, dirndls and flowers, you will be enchanted by the irresistible charm of Salzburg. 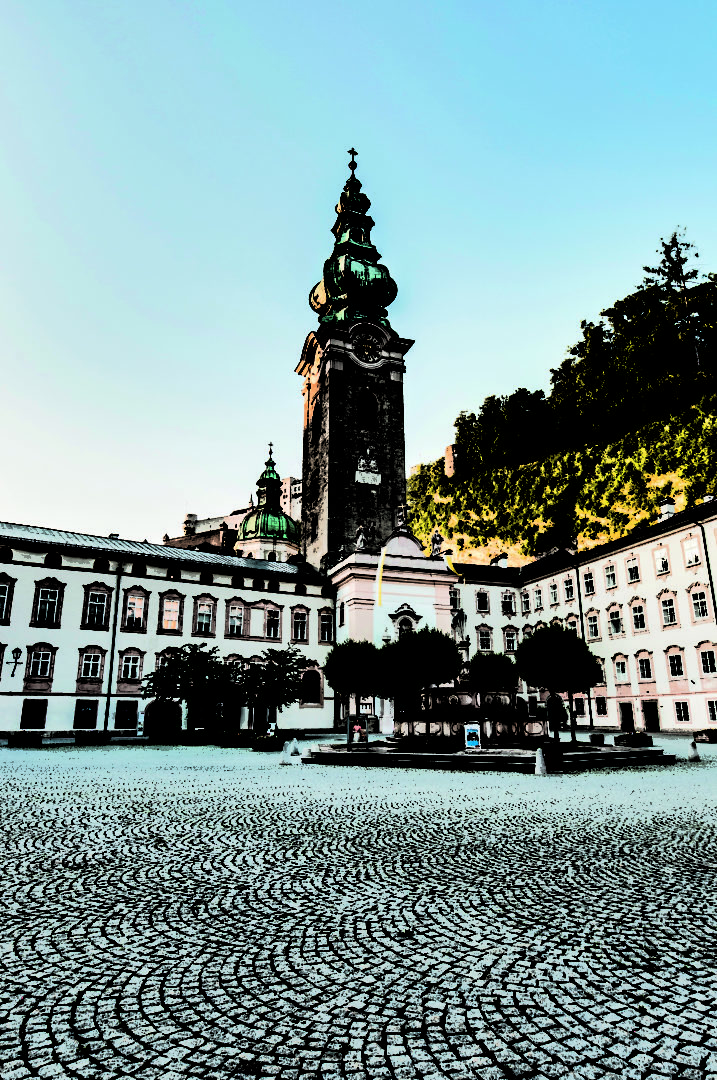 The fortress of Hohensalzburg towers monumentally above the city and its core dates back to the 11th century. It watches over the old city district of Salzburg, the Altstadt (old town), which in December 1996 was registered on the UNESCO list of World Heritage Sites and has a prominent position on the must-see list of most visitors. The picturesque cityscape is never spoilt by a modernist structure: the medieval and baroque monuments are elegantly interwoven with towers and domes to create a unique architectural mosaic. The narrow streets with their cobblestones, ornamented facades and cosy cafés resemble the Diagon Alley from the Harry Potter universe, though wizards and witches will be hard to spot. Carriages drawn by snorting horses with clattering hooves will entice you to go for a scenic drive, and in winter the air is scented with warm chestnuts and steaming mulled wine. It’s a sensory bombardment of the nostrils, taste buds and eyes alike. 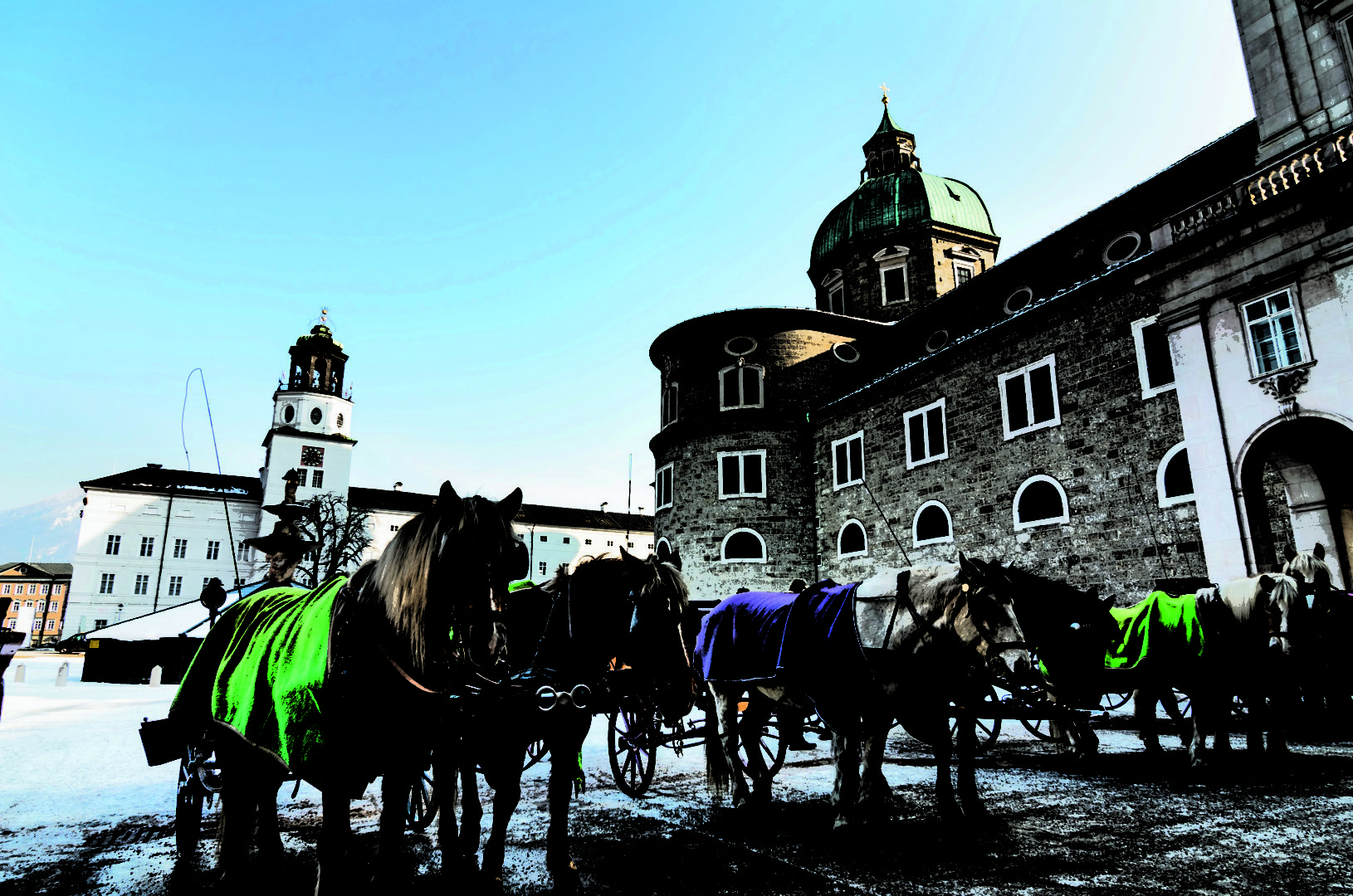 The Altstadt is full of sights upon sights: museums, colourful market stands and magnificent churches. Close to the famous fortress, you will find the convent of Nonnberg, which has existed since the Carolingian age and furthermore served as the home of Maria from The Sound of Music, before she moved in with the von Trapps. With its 900 seats and at 100 meters in length, the Salzburg Cathedral is equally impressive and constitutes the religious centre of the city. For more secular entertainment, the plentiful classical and more unconventional museums will satisfy any cultural appetite, with everything from Mozart to toys.

The narrow houses leaning against each other, the artfully decorated doors and countless wrought-iron guild signs all give the Getreidegasse its unmistakable originality. The main artery of the Altstadt combines traditional crafts with a modern shopping street and is home not only to Salzburg’s oldest building but was also the birthplace of Mozart. The historic iron insignia of the old guilds have to share the street with the increasing number of modern brands, though some businesses have made a creative effort to fit contemporary corporate logos into the style of the guild signs. From the Getreidegasse, there are several passages leading to charming courtyards. The idyllic shops and cafés are often frequented by the locals and have plenty to offer if you want to pass the time or spoil yourself with a traditional treat. 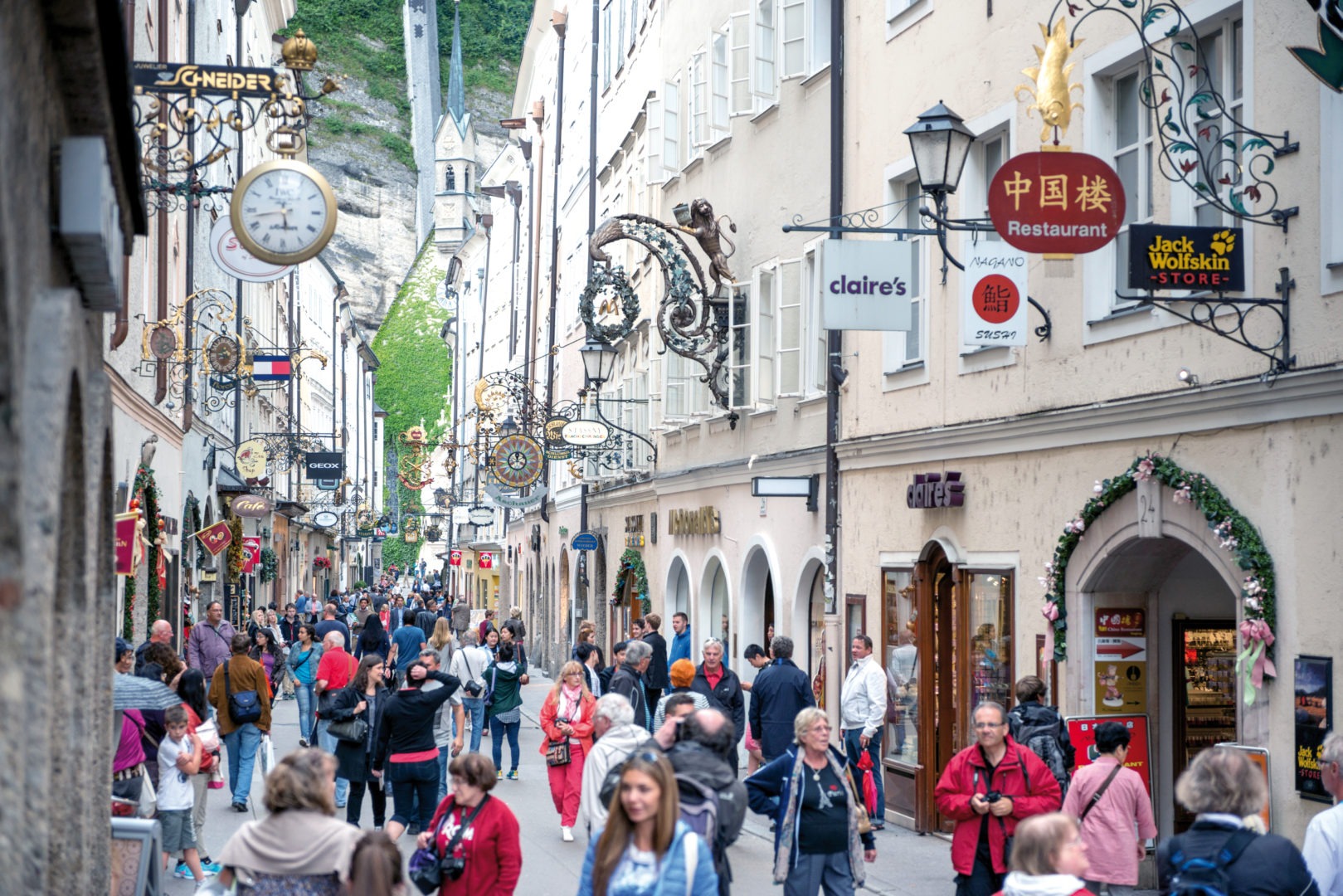 The Salzburger Festspiele is considered the most important festival for classical music and performing arts in the world, and will pamper your ears with enchanting tones. Since 1920, July and August have been all about Mozart, Strauss & co., and the impressive program of stage plays, operas and concerts attracts more than a quarter of a million guests to the city every year. Those who can’t get enough of Mozart should return in January, when his music is celebrated during the week of the Mozartwoche.

The historic Altstadt has plenty to offer visitors, and continuing beyond may prove a rewarding decision. Off the Getreidegasse and the Domplatz, you can explore the thriving art scene, jazz music clubs and famous breweries such as the Stiegl brewery or the Augustiner Braustübl. The concert venues provide excellent live music 365 days a year, and the Schönbrunn castle 20 minutes from the city centre is certainly as beautiful as the name (which means “beautiful spring”) indicates. Additionally, the city has lots of unusual activities to choose from. Aside from cultural and culinary experiences, fans of the great outdoors have plenty of options: swimming, paragliding, climbing, visiting the salt mines, skiing or touring the locations of The Sound of Music. Being bored in Salzburg simply isn’t possible.

By the way: the lack of success of The Sound of Music in German speaking countries is partially attributed to the fact that the film depicts the repressed Nazi history quite vividly, and towards the end of the movie the von Trapp family is forced to flee. Today, however, The Sound of Music is shown non-stop in several Salzburg hotels. But even without any reference to the film, Salzburg is a sure hit.

Located centrally, the MEININGER Hotel Salzburg City Center receives all the visitors who want to follow in the tracks of the child prodigy, Wolfgang Amadeus Mozart. Only 2.5 kilometres away are the most famous attractions of the city: the birthplace of Mozart in the Getreidegasse, the Mozartplatz and the Festival Hall.