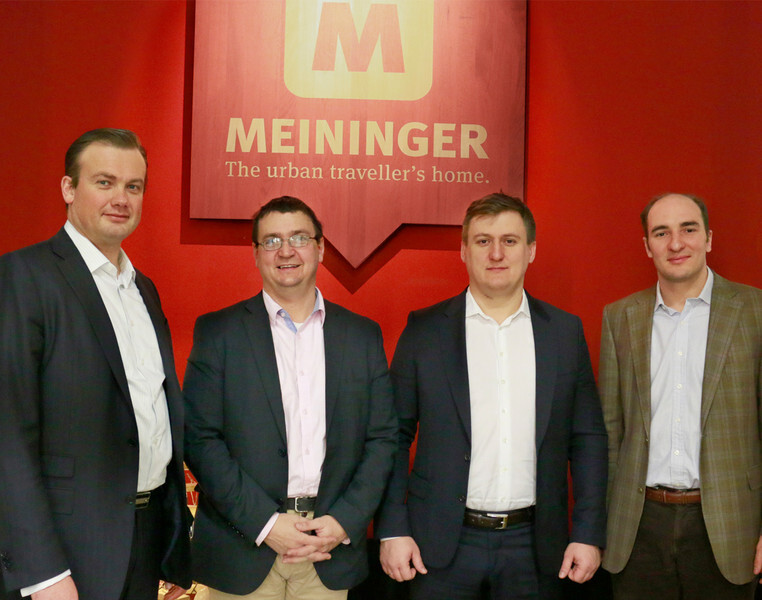 MEININGER Hotels, Europe's leading hotel group, and private equity firm VIYM, which specialises in growth capital and hospitality investments across Russia, CIS and Europe, have today announced the signing of a management agreement. The resulting project will see Germany's MEININGER Hotels open their first ever hotel-hostel hybrid in Russia, as part of VIYM's Nikolskiye Ryady development in Saint Petersburg.

The overall cost of the Nikolskiye Ryady project, including both hotel properties - the MEININGER Hotel and Holiday Inn Express - is expected to be around USD 50 million.

The hotel-hostel hybrid will have 158 rooms, with a total area of 7,300 m2, allowing guests to enjoy the central location, reasonable prices and vibrant modern atmosphere that MEININGER Hotels are known for. The operator is already actively participating in the drafting of construction blueprints, to ensure that the new property is built in accordance with the highest international quality standards. Upon completion of construction, this will be the very first budget hotel managed by an international operator in Russia.

Hannes Spanring, CEO of MEININGER Hotels, says: "With our first hotel in Russia, MEININGER once again enters a new market. Saint Petersburg is the second largest city in Russia, and this diverse and interesting metropolis is continuously evolving. It is the second largest economic and financial centre in the country, one of Russia's largest scientific and educational centres, as well as an international centre for culture and tourism. I'm happy that MEININGER is becoming a part of this attractive city."

Commenting on the agreement, VIYM's co-founder Andrey Yakunin said: "We see that St Petersburg has again been voted the No 1 Destination in Europe. However we are also witnessing a significant shift in the structure of the demand, with low-budget accommodation steadily growing and out-performing other segments. Growth in international independent travellers, the international operated airport in St Petersburg and the increasingly active development of domestic tourism are just a few of the factors underlying this trend, while the approaching FIFA 2018 World Cup should also not be ignored. We at VIYM are continually seeking to introduce new hospitality products to Russia and work together with the leading European and international players for them to enter this vibrant and exciting, yet complicated, market."

The Nikolskiye Ryady project involves the restoration of the historic former Nikolsky Market site, located in the heart of Saint Petersburg. This 26,000 m2 site will be redeveloped into a multi-functional complex, comprising mid-range and affordable hotel properties: a 3-star hotel and a hotel-hostel hybrid, run by Holiday Inn Express and MEININGER Hotels, respectively. Both hotel properties will offer the ideal accommodation for city breaks, business trips, school trips, group tours, round-the-world trips and family excursions.

The design of each MEININGER hotel is based on a specific theme. The aim is to create a welcoming space, of a distinctive character, where guests feel comfortable and willing to share their experiences. In Saint Petersburg, the basis for the local connection was the market hall itself and its former usage as a market place and enamel factory. Complementing this are the various unique features of Saint Petersburg: the legendary white nights, the golden triangle and the very name 'Venice of the North' - which all together inspired the 'St Pete' theme. The theme will be executed by the Lundwall Architects, who are responsible for planning and implementing the interior design for the project.

Because of their central location, the Nikolskiye Ryady hotels will be within walking distance of some of Saint Petersburg's most notable cultural and historical attractions, such as the Troitskiy Cathedral, Saint Nicholas Naval Cathedral, Yusupov Palace and Mariinsky Theatre. The city centre can be reached in 10 minutes by car or 30 minutes by foot. The nearest underground station is a 15 minute walk away. Several minibus lines and tram stations are located in the immediate vicinity, on Sadovaya Street, which, as one of Saint Petersburg's major thoroughfares, also allows easy access to the hotels by car. Moreover, the underground station Teatralnaya, which is expected to open in 2020, will only be a 10 minute walk away from the hotels.

Background information on the hotel market in Russia

MEININGER is a subsidiary of Holidaybreak Ltd, a travel group specialising in educational and activity holidays. Holidaybreak Ltd is a subsidiary of Prometheon Holdings (UK) Ltd, which is a part of Cox & Kings Ltd. Cox & Kings Ltd is listed on the National Stock Exchange, the BSE Ltd and also on the Luxembourg Stock Exchange. MEININGER is a unique hotel product that combines the service and comfort of an international budget hotel with extra facilities, such as a guest kitchen and a games zone.

The central locations, high quality furnishings and fair prices appeal to people of all ages and backgrounds. With the right dose of MEININGER humour and an enthusiastic team, MEININGER hotels become a real home away from home for guests from all over the world.

VIYM (AUM USD 400mln) is an authorised Alternative Investment Fund Manager, regulated in Luxembourg and dedicated solely to private equity services for international investors seeking investment consulting, deal origination and asset management. VIYM targets those who seek a diverse and comprehensive strategy and provides them with exposure to a balanced risk/return profile between the established European markets and the fast-growing, emerging opportunities of Russia and other CIS economies. To provide stable returns and value-added upside potential, the firm varies its investments from the growth capital markets of Small and MidCaps to secure real estate investments.

About Nikolskie Ryady
The Nikolskie Ryady project involves the restoration of the historic former Nikolsky Market site, in the heart of Saint Petersburg, and its further development into a multifunctional complex, comprising mid-range and affordable hotel properties, run by leading European operators. Nikolsky Market is conveniently located in the Kolomna area, one of the oldest neighbourhoods in Saint Petersburg. The Nikolsky Market is within walking distance of some of the Northern Capital's most sought-after attractions, including the Mariinsky Theatre, one of the most famous Opera and Ballet Theaters in the world.